It was announced yesterday that the BBC is to delay their entry into the iPhone application market, pending an investigation by the BBC Trust, and the possible application of a 'Public Value Test' and a 'Market Impact Assessment'.

I can't really see how there could have been any other course of regulatory action. 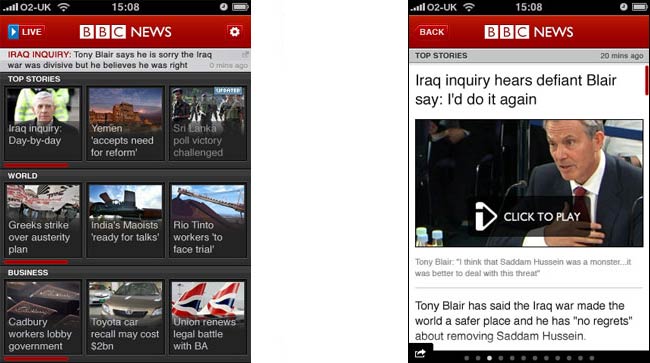 The plans had been justified by the blanket service condition that BBC Online content can be re-purposed for other formats, but it is arguable whether this is really the case with iPhone apps. All iPhones have Safari on them. BBC News content as it exists already works in Safari. Ergo the BBC has already re-purposed their online content to work on the iPhone. Building an app would appear, on the face of it, to be an entirely new service.

The BBC Trust is clear on this:

Section 2.5 of the BBC Trust documentation about when a Public Value and Market Impact test should be invoked says they have to consider four criteria. Two of these seem to be clearly involved.

Clause 2.5.d is duration of the service. To the best of our knowledge, the iPhone app is a permanent addition to the BBC's activities.

Clause 2.5.c is the most interesting. Whilst the "re-purposing of content" might cover the appearance of stories within an app, the official appearance of BBC applications in the iTunes store, directly at the potential point of purchase of alternative commercial offerings, is surely the very definition of:

"c) novelty – the extent to which the change would involve the BBC in a new area of activity, as yet untested"

It also seems interesting that the BBC was planing to launch on the iPhone platform first. When the iPlayer was launched, the first box ticked was Windows users, because they represented the highest number of users. Indeed, in 2008, Mark Thompson said:

"At the time of the development of the BBC iPlayer, the BBC was forced to choose between offering the service to a majority of users immediately - or to not offer catchup TV over the internet until full platform neutrality could be achieved. We chose to begin by serving the greatest number of licence-fee payers possible, and to follow up on that work to extend the service to other operating systems at the earliest opportunity."

With mobile applications though, the BBC is launching on Apple's platform, which has a lower install base in the UK than Symbian or Blackberry phones. In fact, you could make an argument that if the BBC were to enter the market, it should do so in order to stimulate demand for apps on the Symbian and Blackberry platforms, which, despite their larger usage base, have significantly less app activity than the iPhone at present.

That isn't to pre-judge the outcome of any test. You can construct an argument for why the BBC should have a presence in the app store - plurality of news provision, presence of public service content on a platform, or protection of the BBC brand from criticism that has been caused by unofficial applications.

Still, it would have been utterly astonishing to me had these questions not been asked by either the BBC Trust or Ofcom. At a time when the BBC has been claiming that shutting down 5 year old websites like Jamie Kane represents a retreat from expanding their digital footprint, to allow them to enter the app store without even a cursory examination of the potential impact would have been a total regulatory failure.

Disclaimer: The views expressed on currybetdotnet are my own, and do not reflect the views of Guardian News and Media Limited, or any current or former employers or clients.

Ah - but are Symbian and Blackberry the most installed mobile platforms within the W12 bubble? ;)

Even someone with the most basic understanding of the BBC's own fair trading guidelines would see that they would have to do a competitive impact test, if not a full public value test, before doing this.

IF they did do a market impact assessment I cannot see how an app would get through when BBC news mobile content already works well on Safari/Blackberry/Symbian AND other media organisations (even the Guardian) are trying to charge for their apps.

"1.22 However, the BBC’s actions could also have a negative impact on competition if they hamper the ability or incentives of firms to innovate and invest. For example, if a new BBC activity takes demand away from the private sector, a company may no longer find it viable to stay in the market or invest/innovate to its planned levels."

They really shouldn't announcing these kind of moves until they've done the tests thoroughly, it does nobody any favours.

I blogged about the 'BBC iphone app' that didn't work last year in the belief (understandable at the time) that it had something to do with the BBC.

What's really surprising is that BBC didn't pick up that someone was putting this out through iTunes using its brand - and that they didn't move to counter it with their own online PR.

Did something happen after this post since I now have a BBC iPhone app in my iPhone? The article says any service so this would be one of those. The app I´m referring is the BBC Live news app. And this is no unofficial app and it was presented by news crew on a live broadcast.

I also have the BBC iPhone app on my iPhone. Hopefully they were able to get the okay to enter into the market as I think delaying this could only lower their competitive value.

In my opinion, the BBC delivering its content in this form delivers value to the license payer. the BBC is simply an excellent organisation and it is not alone in repurposing its content through apps without asking the user for payment. Distributing these apps also functions as a brand extension: which delivers value to the BBC. I am getting heartily sick of the newspaper industry, and murdoch's offspring in particular, bleating on about the BBC. Granted the Lonely planet thing was strange, but their argument, carried to its conclusion, is simply a mass wailing for the BBC to go away, because the BBC is large, well run and produces excellent content. They can't ask each other to go away, that would sound stupid, but, as the classified ads water drains out of the bath, they can all take turns wailing at the BBC. They remind me of the irish taxi drivers after deregulation, bemoaning the sudden harshness of their existence. tough. adapt or die.