Over the last few days I've been posting about some of the things I noticed of interest in online coverage of the Vancouver 2010 Winter Olympics. Today I wanted to specifically look at uses and applications of Twitter.

In some quarters, Vancouver 2010 has been described as "The Twitter Olympics". Twitter itself provided a verified list of Olympians using the service, which was heavily promoted in the top right-hand 'advertising' slot when you visited the site.

With Glowing Hearts, a documentary movie which is 'about a marginalized community embracing social media tools to empower, inspire and breakdown the digital divide' in Vancouver used Twitter extensively, and gained a lot of media coverage off the back of social media.

With Glowing Hearts from Andrew Lavigne on Vimeo.

The Olympic organisers may not have been impressed that social media made such a splash of a story about some of the social and financial costs of hosting the games.

Elsewhere, use of Twitter upset the USA Olympic team's chief marketing officer, Lisa Baird. 'When people partake in this kind of ambush behavior, it hurts American athletes' she said. She was talking about brands that were not official Olympic sponsors tweeting messages of encouragement to American athletes.

Some of the comments on this Wall Street Journal blog article on the issue pointed out that one of the companies being castigated, Red Bull, actually sponsors winter sport athletes all year round, every year, and that surely it is the Olympic marketing rules that ambush them at the moment someone gets their biggest worldwide exposure.

There were a few instances of online newspapers integrating Twitter feeds into their coverage and interactives.

In Sweden, Aftonbladet had 'OS-Twitter' as part of the left-hand navigation on their Winter Olympics sections, leading the user through to a page with an embedded Twingly window. Users were encouraged to tweet with the hashtag #vinterOS.

The community aspect of Chosun's site in South Korea looked quite Twitter-ish, with brief exchanges between nicknamed users, but all hosted on their own domain, and I have to confess that I struggled to understand the functionality on offer. 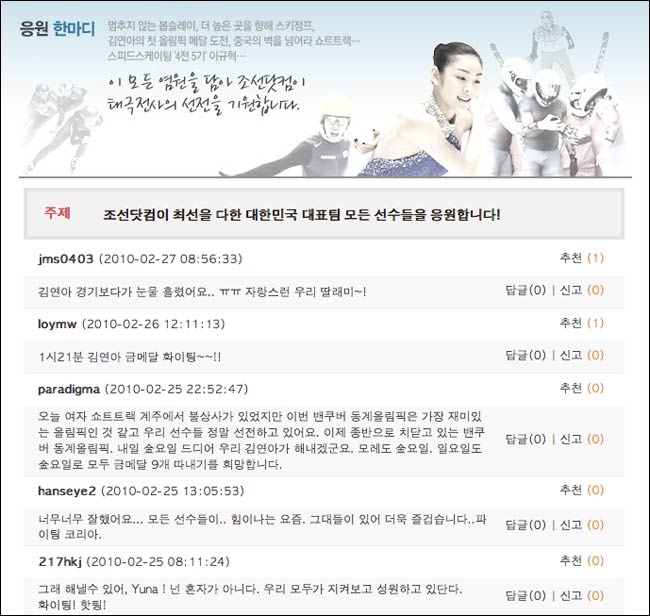 I wasn't helped by the fact that Chosen Ilbo was the only newspaper in the whole of my survey whose Olympics site had significant layout issues when viewing it using Safari on a Mac.

In Germany, part of Bild's interactive coverage was 'Bild Backstage', where a toggle allowed users to switch between reading tweets from Tobias Holtkamp and Ayla Kiran. 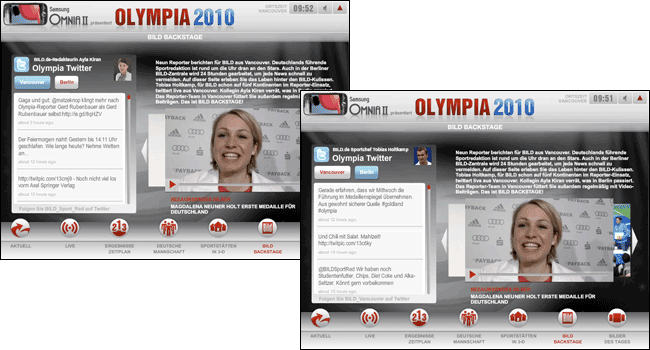 One of them was in Berlin, and one in Vancouver, although I have to say that the design of the buttons left me unclear which one I had actually selected. Is it the button in the Twitter blue, or the easier to read button in white. When I'm reading tweets from Sportchef Tobias, is he in Berlin or in Vancouver?

In tomorrow's part of this series, I'll be looking at more online Winter Olympics coverage from newspapers.

Great article. It was refreshing to read a sensible take on Twitter coverage of the Vancouver Olympics. I am turned off all TV news because I dislike an account of everything that has gone wrong in the world. I use Twitter instead. Olympics and Twitter are wonderful because they are breaking down barriers between people!