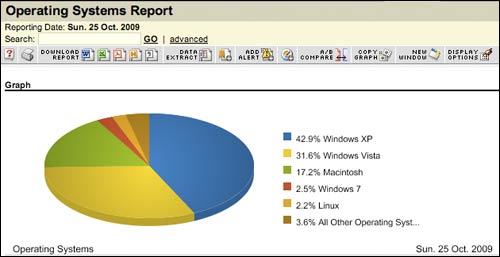 At the moment, on a regular weekday, a week after the Microsoft launch, we are seeing Linux and Windows 7 computers visit The Guardian in roughly equal proportions. It will be interesting to see how this develops, and whether the mainstream media coverage that the new Ubuntu release is attracting will help give desktop Linux a boost.

The usual caveats to these sort of figures apply.

You might also be interested in:
'Spyware!' or 'How I ditched Windows and learned to love the Mac' - March 2008
Busting the BBC's 600 Linux users myth - November 2007
The software used to access the BBC homepage - October 2005
"I hate Macs" says salesperson - November 2003

Read other recent posts about: Linux, Microsoft, Post of the moment, The Guardian, Web

It's hardly a surprise that a preinstalled OS is already overtaking the number of Linux installs. It's also worth bearing in mind that Windows 7 has actually been available for install for a number of months, in Beta, RC, and then released to Microsoft partners. It is a good OS, it's more the marketing that irritates me, MS are ripping features off other OS's left right and centre.

New MS releases will always see an explosion of users running it - the important thing is that Linux (and OS X) continue to gain market share.

No it doesn't, for the reasons pointed out by Chris S. You mightn't be a fanboy, but it seems you ain't too bright either.

Anonymous coward, thank you for not calling me a fanboy, but in your rush to dismiss me as not too bright, you seem to have missed the phrases "4 days after release" and "a week after the Microsoft launch" in my article?

you seem to have missed the phrases "4 days after release" and "a week after the Microsoft launch" in my article?

I didn't miss them - indeed it was the main reason for my comment. You are implying that Windows 7 usage on the blogs has gone from zero to a level similar to that of Linux in just 4 days. As Chris S says, there's a large number of people who've been running Windows 7 since prior to last Thursday, but you've chosen to ignore them, which is a bit stupid if you ask me.

I used Windows 7 in the beta stage and loved it. Eight days post release, I am installing it tonight on my primary machine. My company has already begun rolling out Windows 7 also. Microsoft MAY have hit a homerun with this one...or perhaps the previous OS was such a strikeout that this one soars in comparison. ;)

I can't spot the bit where I say "gone from zero"

You seemed to have missed the phrase "implying", and if you take time to read the headline to your post again, I'm not sure how you can disagree with me.

However, if that wasn't what you were implying then I can't really see much point to your post. All we know from the details you've given us is that there were X% of people using Windows 7 before launch, and that this increased by Y% in the 4 days after launch to a figure of around 2.5%. Without details of what X and Y were, you're not really telling us much of any worth.

"I can't really see much point to your post."

Which makes coming back to it again and again to anonymously troll it seem even more pointless...

Fantastic. You post a headline like that and then try to pull me up for trolling? Pot, meet kettle ;-)

Getting back on topic, would you care to share the X and Y figures with us?

Hey, I'm gonna drop the 'coward' bit because you do keep coming back rather than running away ;-)

So, I'll start with I genuinely, genuinely, genuinely do not understand what your issue is, apart from some fanboy grief that you don't like the numbers? I think the headline perfectly reflects the story and is 'grabby' and retweetable - if you are writing headlines for the web you need them to be short, sharp and to invite a clickthrough. I did start with "About 7 months after we first ever saw someone in the States testing some pre-Alpha version of next-gen Windows, it reached 2.n% of usage, and I'm not going to compare that to any other OS" as the headline, but somehow it wasn't as catchy...

It is a simple story. 4 days after commercial release one of the UK's biggest web publishers saw Windows 7 usage overtake the OS closest to it in percentage terms. I'm sure I'll post again when and if Windows 7 overtakes Mac OS usage, and again if and when it eclipses Vista. It has got nothing to do with me thinking Windows 7 is superior to Linux - I use Linux myself, I haven't used Windows 7.

What is interesting about it? Well, most major publishers in the UK don't actually release a breakdown of the technical spec of who is visiting their site. I think it is really cool that we have so many Linux users - well above any of the 'Internet average' figures for Linux usage. I like to think it shows we have a very sophisticated and computer literate audience at The Guardian.

Your X and Y figures? On July 22nd when Windows 7 was released to manufacturing we were seeing around 0.7% of visitors using some form of beta or release candidate. At the beginning of October this had risen to 1.3%. Usage pretty much doubled overnight on commercial release. I'll repeat the caveat though - analytics only count what they are told.

But back to our debate - again the facts are that 4 days after commercial release, Windows 7 usage overtook Linux usage on guardian.co.uk for the first time. You can move the dates to make yourself feel happier and call out my article or headline as pointless if you want, but that is the timeframe of what happened. Four days after release, we saw more Windows 7 visitors than Linux users. Only for one day, as on a normal weekday they were pretty much level pegging at the beginning, but that is what happened. I'm going to stress the 4 days again - Windows 7 was commercially released on October 22nd. These statistics are from Sunday 25th. That is four days.

This Sunday, incidentally, the respective figures were 3.1% for Windows 7 and 2.6% for Linux, which looks to an increase for both in terms of share, but also goes to show how a one day snapshot isn't necessarily indicative of a longer trend.

Honestly, it is a short blog post about some Internet usage stats on one day of one website - why vex yourself about it? I doubt it is going to be the deciding factor between whether Linux eventually rules the world or whether Windows 7 is a commercial success...

This is an expected behavior right? Anyhow, Windows is the leading desktop OS and it has to become successful unless it's as pathetic as Vista.

(It's not a short term trend like bing gaining some search share during August or so, and now back to it's normalcy)

remember as with any new OS there is an initial curiosity factor to go along with those with 7 pre-installed.

i will wait a few more months before upgrading. hoping it's an improvement over vista (which isn't saying much!).

I was just reviewing the backlinks to my site and there was one from your site. I was not sure about the link so browsed your site and here I found it via comment!

So, the part which I am to write about is nothing about your posts and writing because I just read some of the comments on your posts and your replies. Believe in me, they are funny :) People here seeking backlinks and you are rewarding them too. They make no sense (might be I am too) still getting backlinks via those funny comments which I read as "Anonymous comment spammer" lol

You should put it off (the dofollow comments) to avoid such spam or to put in some spam filter or plugin to moderate them.

I tend to agree with Anonymous coward here. When I read the headline, I too got the impression of Wow ! Windows 7 overtook Linux in just 4 days. Only when I read the reader's comments, i too realized that windows 7 has been in use for many months; just that its not the officially released version.

I don't understand why there some Linux fanboys saying that Linux in all of it's flavours will be the only operating system of choice on the desktop when Microsoft Windows 7 is going to kill of Linux on all desktops and IMHO I think that Linux's days are numbered and the Linux fanboys don't like what is happening.