Live-blogging the BNP on Question Time across the web

I'm sure you've read more than enough about the pros and cons of the BNP appearing on the BBC's Question Time over the last week. I was interested in capturing some of the contemporaneous coverage on the web across a range of media and political outlets. 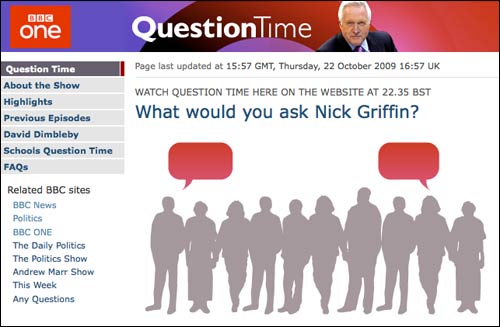 Liveblogging on The Guardian and The Telegraph

The Guardian had two live blogs for the event. One 'minute-by-minute' ran during the day, and then Andrew Sparrow took over when transmission started. We also used our new-ish Twitter widget, which aggregates the tweets from specific journalists around an event. 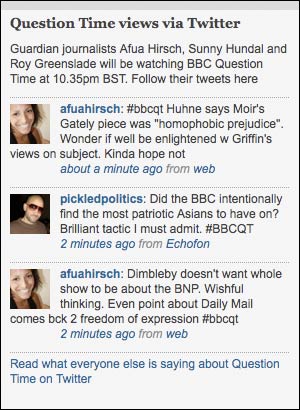 The Telegraph were also live blogging, with Will Heaven manning the desk. Like The Guardian, readers chipped into a pretty lively comment thread during the show, and Will carried on the debate in comment threads on other Telegraph pieces the next day. 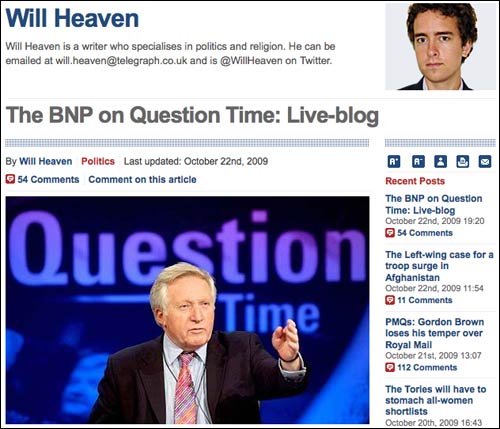 CoverItLive on...well...just about everywhere else

The newspaper industry still likes to see itself as a closed enclave on the web - see the primacy of ABCe figures for measuring success for example, a comparison that doesn't include the BBC, Sky, Yahoo, MSN or Google. It was interesting to note that whilst The Telegraph, Guardian and Times Online were competing against each other during Question Time's transmission, they were also competing against live coverage on smaller publications like The Jewish Chronicle, political blogs like Conservative Home and Mark Reckons, and special interest group blogs like Biased BBC. The Guardian and The Telegraph were using in-house publication tools, but the rest of those I looked at were competing on a level technical playing field - CoverItLive seems to be the live blogging weapon of choice elsewhere on the web whilst the show was being broadcast. 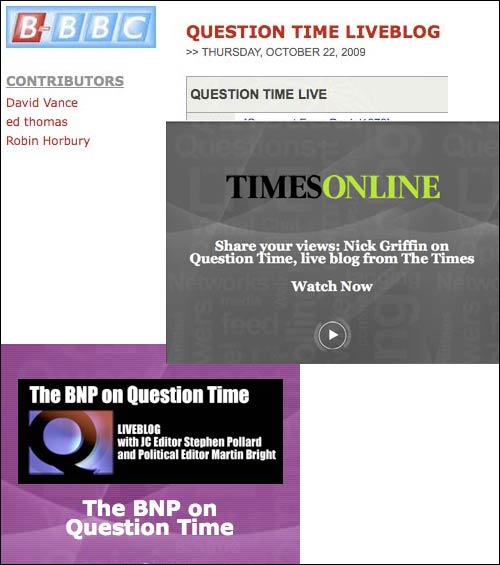 Switching between the various outlets allowed for a good game of 'are you watching the same show that they are watching?'. For every comment on one site that 'The whooping audience is just making the BNP seem more like underdogs. Nice one BBC' [Mitch Henderson, Times Online] you could find someone arguing that 'He sounds seriously extreme on the Holocaust and Islam. Very off-putting for the vast majority of people' [Martin Bright, Jewish Chronicle]. For every 'I can not, for the life of me, understand how Griffin thought this could go well for him.' [Steve, Biased BBC blog] there was a 'he can't lose, any poor performance by him will be spun into a cock and bull story of BBC bias' [Ruth, Mark Reckons blog].

Incidentally, I'm all for minimal moderation in private community spaces, but I do think the Biased BBC blog allows any sensible points made in the course of their live debate to be totally undermined by publicly publishing comments about Baroness Warsi like "The most powerful Muslim woman in Britain? Does she sell suicide belts then?" and some of the unsavoury comments in the screengrab below. 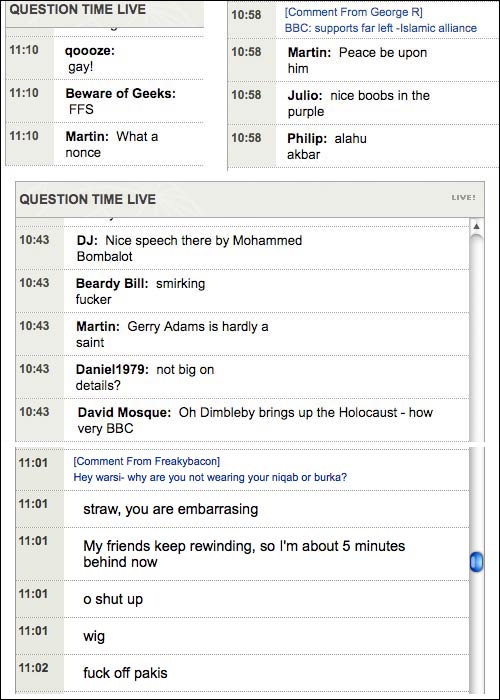 The intersection between mainstream media and new media has been an interesting time in the last couple of weeks over the Trafigura and Jan Moir incidents. This had more of a 'forced' old style top down media feel to it. Andrew Grice in The Independent accused the BBC of over-hyping itself for the event. With footage carefully released to news bulletins before the show was broadcast in full, it felt very stage-managed, and I have to say that "Watch scheduled television programme at scheduled time" is one of the lamest breaking news straplines I've ever seen. And I watch Sky Sports News a lot...

Views of how Griffin performed on the programme differed across the various sites I was watching. Nearly everybody ran a poll asking whether Nick Griffin should have been allowed on to the programme at all. Regardless of the source of the data, it seems that most people agreed it had been right to invite the BNP on Question Time. 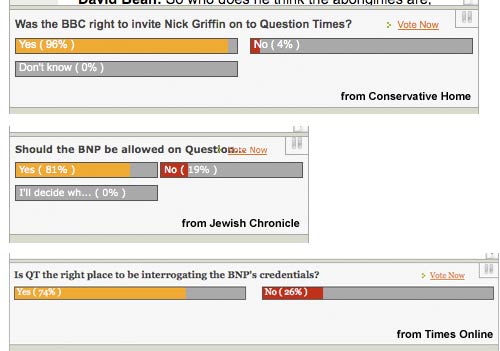 If you want to look back at any of the Question Time live blogs I've mentioned you can find them here:
Biased BBC | Conservative Home | The Guardian | Jewish Chronicle [no direct link - embedded in the bottom right of this page] | Mark Reckons | The Telegraph | Times Online

The BNP controversy highlights a wider issue. In this internet age it is impossible to censor the views of even the most extreme loonies, and so we are moving into an age of instant extreme looniness. The internet has many advantsges but this, along with the prevalence of pornography and criminality, is one of it's few disadvantages.

From a BBC perspective, doing those live QT sessions is the best thing that ever happened to Biased-BBC.

Just seems to me that whilst the decision to host the BNP was correct, the BBC's decision to change the whole format of QT into some sort of very PC censorship of the BNP totally backfired, allowing a KKK loving, Muslim attacking, Churchill mugging party to gain some sympathy.

The panel, audience and presenter were so skewed in their puritanical desire to censor that it seemed the most unfair of fights. What should have been the humilation of a nonsense party with nonsense views became mob hatred led by a top table so full of vitriol and PC disgust that they let Mr Griffin escape with that false sense of bullied helplessness.

You have to wonder?

I fail to see the importance of live blogging. In the graphic above, "f@ck off pakis" was one of the comments. There needs to be some type of filter.

You might argue that one significant factor in the value of this set of live blogging was that it showed that on that particular site, the knee-jerk reaction of a user to seeing someone with a brown face on television was to hammer out "f@ck off pakis" onto their computer, and the moderators on that site approved the comment.

How dare these political morons dare to try and suppress the thinking and mindset of the british people, taking for granted again that we will all just line up at the polls and just vote for mainsteam political parties. they have had their chance and blew it thieving, lying,evading the issue. But mainly never carrying out any of teir promises.I am afraid the penny has dropped for most of normal voters and now they are going to vote for policies that they want whatever the party ukip or bnp, The stable door has opened and the horse has bolted. lets get the election as soon as possible and lets relay how the people really want things to be. Hopefully it will be the start of the change to P.r

I've disagreed that the right thing was to invite the BNP on Question Time. Unfortunately I was on the minors side with just 4%.

Hi anon, sorry if you found the racist remarks offensive - I do too - but the point of having them up there is to show the kind of comments that are approved by moderators on that particular site, not to echo the sentiment they expressed.

I guess it is no different to talk-back radio. Which I am afraid does little for me either.

The lack of moderation is very surprising. I am all for freedom of speech, but seriously, if that is the level of your communication ability then you forfeit that right.