Ice Sunday: Part 3 - The death of the ice trade

Over the last couple of days I've been writing about my visit to the London Canal Museum on "Ice Sunday". This was a chance to explore one of Carlo Gatti's ice wells - a remnant of an industry that flourished during the 1800s, but which was gone by the time the First World War arrived.

I often write about music and the newspaper industry, both areas where technological advance has disrupted established businesses. In his talk during "Ice Sunday", Malcolm Tucker showed a graph illustrating how Norwegian exports of ice plummeted from their peak at the turn of the 20th century, to zero by the late 1910s. It had become economical to make artificial ice in London, and the trade literally melted away in the space of a decade.

The process of making ice using compressed ammonia had been around since the 1870s, but it took a while to become economically viable. Business like the Haslam Foundry in New Bridge Street London advertised their machines, which, although they took significant initial capital investment, were cheaper in the long run than seasonal imports. A factory manufacturing large blocks of ice using this kind of method was still operating in Battersea in the 1980s.

There is some mention of Gatti's ice trade in The Guardian's digital archive. In September 1906 the country was enjoying something of a heatwave, and an article called '93 in the shade' had this to say:

"The two businesses which are really booming are the ice and mineral water trades. All day long, from all parts of the metropolis, the wholesale dealers are receiving telegrams and telephone messages ordering ice to be sent 'at once'. The combine which is known as the United Carlo Gatti, Stevenson and Slaters, Ltd, sent out yesterday between 900 and 1,000 tons of ice from their various depots. Some of this ice was brought to England so long ago as February and March of this year and had been specially stored for emergency. Of the ice sent out yesterday about 800 tons of it was imported from Norway, while 80 tons of it was made in London." 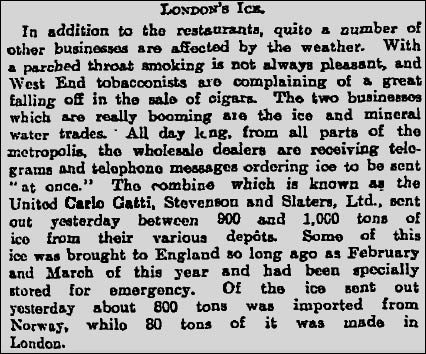 Seeing that their ice storage business had a limited shelf-life, the building was converted and the wells fell into disuse. By the end of the first decade of the 1900s, the building was given over to stabling the horse and carts that ran an efficient distribution business in London. Unfortunately, the Gatti company had not foreseen the rise of the motor car and motor van, and so by the 1920s the building was simply used as a canal-side warehouse.

The London Canal Museum was an inadvertent beneficiary of the Thatcher Government's abolition of the GLC. The GLC had been buying up property in the area in anticipation of a major re-development programme, but had to relinquish it. The museum originally had a limited lease, but were able to obtain their freehold, and now seem relatively assured of a future in an area that is finally undergoing a major renovation and transition. It is located just behind The Guardian's Kings Place office where I work, one of many new buildings finally going up to regenerate the area. 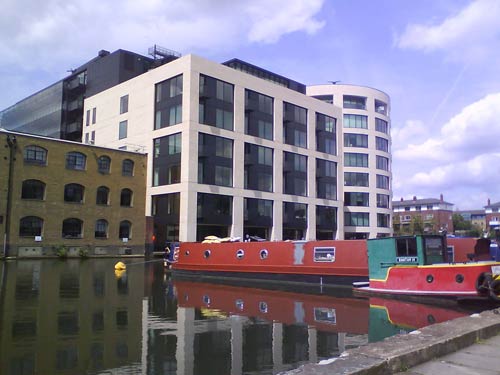 Read other recent posts about: Events, London, Nostalgia, The Guardian

It makes me wonder what aspects of our modern world will be gone in 30 years. The idea of having a TV in your house? Typing?

Thanks for sharing this.

My father used to work for United Carlo Gatti Stevenson and Slater Ltd at their depot in Queensbridge Road Shoreditch for many years we lived in the depot in the depot foremans house.
we used to sit up and watch the newly made blocks of ice being sent down the shute to the loading bank, from 2am, and then the excess ice in their My three 4cwt blocks were stowed away into the icewells. My three brothers and I used to help our Dad load the lorries and carts with ice ready for the roundsmen to do the deliveries. We used to earn our pocket money by filling up the tanks with fuel, when the roundsmen finished their deliveries. The factory started to run down in the early sixties and the main distribution of ice was taken over by the Icewells in Parkgate Road Battersea.
My father then ran the Carlo Gatti outlet in Lovet Lane Billingsgate fish market suppling wet ice to the fish wholesalers until he retired in 1975.

Hello My father was an iceman all his life with Carlo Gatti. His depot was Parkgate Road; His father was manager there. I hope to visit the Museum. Regards. Michael Rimoldi.