It was twenty years ago today...the 1989 Reading Festival

Unless major figures have died, there has been a massive terrorist attack, or a man has landed on the moon, there aren't many days of the year where you can be absolutely sure you know what you were doing exactly twenty years ago, but today is one of them. Twenty years ago today I was in a muddy field listening to New Order. I know this because one of the pubs near to where I used to live in Muswell Hill had a poster up on the wall for the 1989 Reading Festival.

When I look at the poster now, it is no wonder that I went - the bands on were basically an A-Z of my record collection at the time. New Order! Swans! The Sugercubes! Spacemen 3! World Domination Enterprises! The Mission! The Wedding Present! That Petrol Emotion! House Of Love! Butthole Surfers! Loop! Spacemen 3! Jesus Jones higher up on the provisional bill than My Bloody Valentine!!! 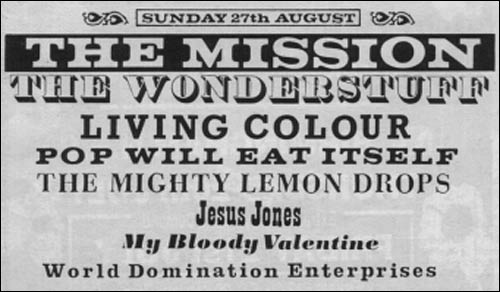 I didn't have a tent, and since I was going on my own, my rather naive original plan as a 17 year old was to just take a change of clothes in a bag and find somewhere to sleep under a tree. Fortunately, a few days before the festival started it turned out that a friend of a friend was driving up and had a massive tent, and so I went with them. I distinctly remember that the car journey on the way up was the first time that I heard The Stone Roses debut album all the way through - a release also enjoying a twentieth anniversary this year.

I've found some photos of the crowd in 1989 on the Reading Museum website, where they have an archive of images from the festival. Although the 1989 images have a ©2004 stamp, the presence of an Under Neath What! t-shirt positively confirms them as being 1989 vintage. I haven't managed to spot myself, but I would have looked exactly like every bloke in these photos. 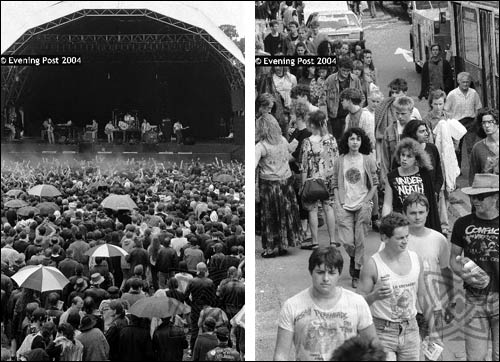 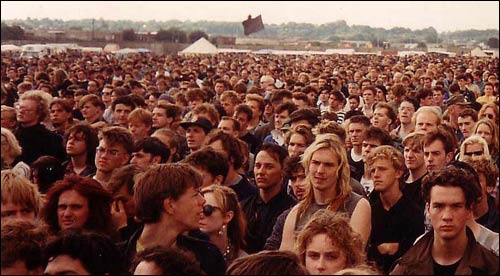 Just take my profile pic, and imagine me wearing an army style jacket, with a compulsory scruffy indie haircut, and wearing a band t-shirt. In fact, on the second day at the festival in 1989, someone offered to buy my New Model Army t-shirt off me, as it was a promotional one for the 'Green and grey' single that had only been distributed as a freebie to record shops.

If I was going now I'd probably be live tweeting the event, and be able to relive it almost immediately via bootleg clips on YouTube. As it is there are a couple of sites online dedicated to the history of the Reading Festival, which include set-lists from the weekend, and reminded me of some of the costs:

You probably wouldn't have been able to buy a t-shirt at Michael Jackson's O2 gigs as cheap as that! And you could apply for tickets by cutting a coupon out of the Melody Maker advert and sending off a cheque... 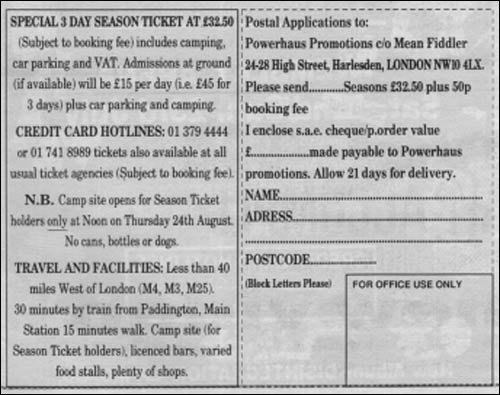 The Reading Festival is always tons of fun. Nice to see that the Butthole Surfers played at the show you went to.

Looks like a great time I'm sure. Things like this are something that you never forget, even if you can't remember the whole thing from too many pints!

I was there! Reading that is, not freaking out with the Christians.

I remember going out and buying Isn’t Anything the day after I got back, so I must have been impressed.

Looks like everyone was having a good time there, I like the shot of those eighties hairdoos!

I was there too - and very possibly in the bottom right hand corner of the coloured crowd shot above. first complete face on from right and big brown hair. I base this on the fact i look just like him and some of the faces around me look familiar - esp. guy with long blonde hair - is that you Chappy?
Only flaw is i can't really remember what i looked like then?

Whilst voice of the beehive were on i was standing on a van watching or flying a kite with a duck tied to its tail.

NMA and the mission were fab.

I was there! And I went this year too (well, just on Sunday night) - a 20 year gap. Saw Radiohead in action. They were almost as good as Spacemen 3.

Friday '89, my sole day at the Reading Festival, largely as I'm not a fan of huge, open air concerts in the mud, but, my god, what a line-up. Someone told me this was the last concert the Spacemen 3 ever played, if so what an exit (met Sonic last night, should have asked him). The luminous guitars, their soundmen pogoing to (iirc) 'Things Will Never Be The Same'. My sole Spacemen concert, and much cherished. Then followed by the godlike My Bloody Valentine!!! I recall the guitarist of Swans Norman Westerburg looking disenchanted with their then acoustic leanings. Another guitarist Terry Bickers, seemed in another world, played the heavens out of the sky, that he got kicked out of the House of Love shortly afterwards will have surprised no one that day. I recall thinking I'd rather listen to Bjork than her band, and New Order were magnificent. I recall Hooky being restrained by roadies at the end, he was about to do something with the amp stack (torch it???). Quite a day, and what an extraordinary collection of bands.

I was there too - great weekend & nearly missed New Order as [snipped details she probably doesn't want Googled twenty years later] made me shag her in that awful tent,

The Butthole Surfers were great - stars of the show, Friday night & daytime was the choice day to go