'Fabiola' by Francis Alÿs at the National Portrait Gallery

Just over a week ago I went to the National Portrait Gallery to see the Francis Alÿs exhibition 'Fabiola', supported by the Dia Art Foundation. He has spent years gathering reproductions of a now lost painting by Jean-Jacques Henner. Split over two rooms, the viewer is confronted with around 300 slight variations on the same image of a young woman in profile wearing a red veil. 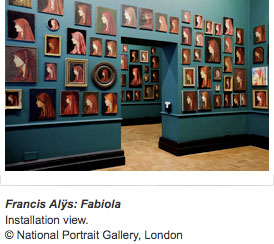 At first, of course, it is the similarity that strikes you. Gradually, though, it is the differences that become more intriguing.

Why has this artist chosen to turn her face more towards the viewer? Why has this one reversed the image so Fabiola is facing right? All of the images have her in a red head-dress save a few, and they all have her in green instead. Did these artists all choose green as an alternative individually, or was there just one switch to green that has rippled through the images. By contrast, in the miniatures cabinet, there is a variation that appears in blue twice, but none in green.

I didn't get a picture - the National Portrait Gallery does not permit photographic portraits of their portraits - but there is an official image gallery of the exhibition from when it was displayed at the Hispanic Society of America in 2007. 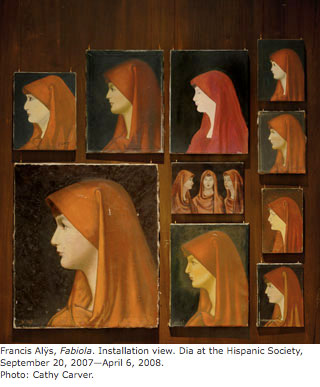 And what about the subject herself?

According to my Dictionary of Saints - yes there are things I still prefer to have listed in books - she died in 399. After the scandal of going through a divorce and re-marrying, upon the death of her second husband she turned to good works and repentance. She opened a hospital and a hostel for pilgrims in Rome, which was, according to Jerome, known throughout the world. Fabiola is thought to have travelled widely and visited Bethlehem. Her feast day is celebrated on December 27th.

Here are another couple of views of the exhibition when it was on at LACMA in Los Angeles. 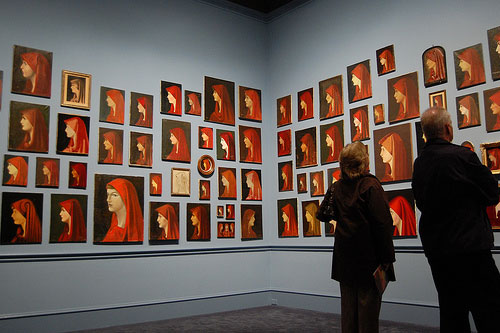 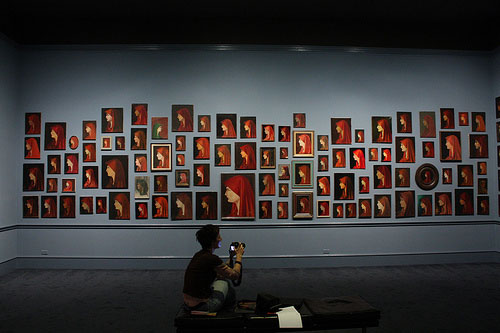 Photo thanks to mind on fire

The Fabiola exhibition at the National Portrait Gallery is free and runs until September 20, 2009

This is one of my favourite exhibitions of the year. Really enjoyed it. It's good because it gets you to focus on the different treatments.

I like the macro effect of the full wall of portraits. Very cool installation.

What a beautiful exhibition, I adore faces in artwork, find them intriguing and along with the colour, amazing. Seen some great exhibits at The Tate but this is wonderful.

Portraits have powers quite other than pictures of apples or rolling fields; they appear to us as people first, however momentarily, before they revert to pictures. Fabiola is the purest expression of this effect: friend, heroine, living saint to all these people, she has services to perform in this world, not least in proving that there are an infinite number of ways to paint a portrait.

Such subtle variations used to great effect in this collection. It's amazing that such a large collection can be built using one subject in very similar poses yet each individual portrait having its own signature of lighting, contrast and texture.