Are our celebrities turning Twitter into a broadcast medium?

The current media buzz around celebrities on Twitter seems to be driving take-up of the service, at least in the UK anyway. However, what is interesting to me is that the celebrity angle fundamentally changes the nature of the service. Are we gradually watching Twitter transform from a conduit for conversation into a broadcast medium? 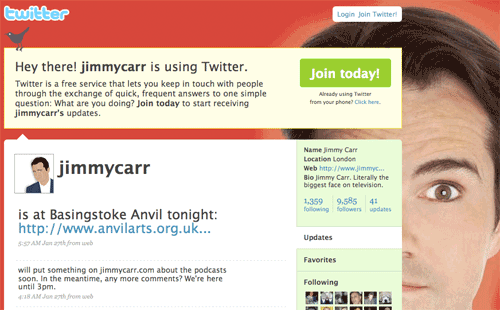 Earlier this week The Times published a (somewhat maligned) list of popular celebrities on Twitter, sorted by the number of followers they had. That isn't necessarily the significant statistic for engagement, and so I had a look through the list to also see how many people these celebrities were following, and how many updates they had sent.

Quite a few of the celebrities are following very few other people. Of course, in some ways, this is understandable. Estimates for how many people you can reasonably follow before it just becomes noise vary between around 150 and 400-ish. But that is certainly well above the 19 people that Mischa Barton follows, or the 6 that Jamie Callum has taken to heart.

The official Jamie Oliver feed is only following five people for example - and they happen to include fellow celebs Richard Branson, Alan Carr, Stephen Fry and Jonathan Ross.

Neither Boris Johnson or Alan Carr follow anybody else on Twitter at all - the absolute epitome of a celebrity using the service as a simple broadcast channel.

The pure numbers are not the complete picture however. Demi Moore is hardly following back any of the 13,529 people following her, but her updates are full of enthusiasm and @somebody replies to questions people have asked her.

This in itself has spawned a new Twitter phenomena.

Being on the receiving end of an @somebody can suddenly generate hundreds of new followers for the person who asked the question. It is a bit like the spotlight suddenly falling on one individual within a crowd of thousands, and all the people nearby turning round to look at that person.

The frequency of updates is also a key indicator as to how much a celebrity has really adopted Twitter. George Lucas is a classic example. He seems to have used the service with a quick burst of enthusiasm on September 10th 2008 when he signed up, and then rather more sporadically since then. By Tuesday morning he'd made 49 updates in total. This is significantly less than Darth Vader, who is also on Twitter - although I was delighted to spot that George Lucas follows Darth Vader. 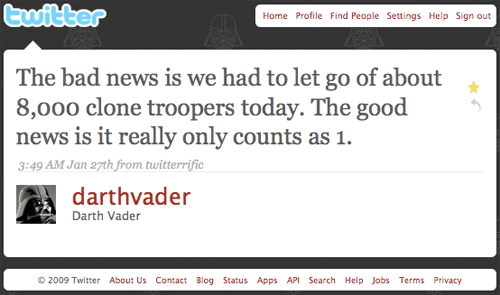 Another thing I find interesting about this is how the presence of celebrities has changed the dynamic of the service for new joiners. If you think about it in terms of Facebook, it is as if the first time you joined Facebook, you sent Philip Schofield and Arnold Schwarzenegger requests to be friends, and they friended you back. And all your real friends, as they joined the service, could see that you were friends with a celebrity. So they friended the celeb too. 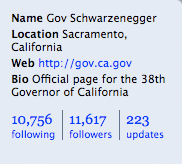 If nothing else, it really throws into sharp relief the complete lack of a business model for Twitter.

Put it this way - at the moment they have built a super-hotline for Stephen Fry to contact 100,000 of his fans directly and instantly - and Twitter are paying for it, not him or the fans.

In this context, you can see why twitter got rid of SMS in the UK. Things start to get expensive if everytime Stephen Fry tweets 100 000 messages get sent out...

at at average of 10 tweets a day http://www.tweetstats.com/graphs/stephenfry

That equates to a million a day!

But Twitter *isn't* a conduit for conversation. It's literally meant to be a blast quick-blog update - look at the status badges that Twitter encourages you to put on your site.

In order to have a conversation, you need to be able to see your replies easily, and that's not done unless you follow a specific link on the Twitter homepage or use an external app like Tweetdeck. I hadn't spotted the @Replies page until 18 months after using Twitter.

Facebook, on the other hand, can be a conduit for conversation with its status updates simply because if you see an update you want to respond to, you just simply comment underneath it. This simple little thing turns it into a viable conversation model which Twitter just doesn't do.

They may be Martin but actually does it really matter?

The community that the individual sets up within twitter is entirely up to him.

There is no point communicating with these so called celebs,they will rarely if ever respond.

For me Twitter will be shaped by its users .It is a community for exchange of ideas and information not one for celeb showboating

Jonathan Ross, Stephen Fry, Nihal, Philip Schofield, Richard Bacon, Richard Herring, Robert Llewellyn, Graham Linehan, Will Carling to pick a few tv presenters, writers , DJs, sportsman at random are all a) following high percentage of users b) replying at length to followers c) fairly committed over a reasonable length of time. My hunch is that "celebrities" usage mirrors civilian usage except we just don't notice it. I'm sure that a high percentage of "normal" users trial the service and give up, don't follow users or just send out a stream of updates without @replies or DMs.

(declaring an interest. I work at the BBC and have helped with guidance for bbc people who are using or thinking about using twitter)