A big thumbs up for the Daily Mail's comment rating system

I've been for some time meaning to write a series of blog posts along the lines of 'things I like about online newspapers' looking at what they do well, but I wanted to pre-empt that with a look at one thing in particular on the Mail's website. It is a very simple interaction that they added in December, but one that I think really enhances the site. I'm talking about the ability for users to give comments a virtual 'thumbs up' or 'thumbs down'.

It doesn't seem to have much functional impact - it doesn't reorder the comments for example, or allow users to block comments from being viewed, but it adds a whole layer of interactivity to the site which gives visitors a sense of the depth of feeling their audience has for an issue.

The number of comments an article attracts is one way of measuring user engagement with an article or editorial line, but the number of people who approve or disapprove of the views expressed takes this further. In this week's story about Carol Thatcher the level of approval for comments suggesting that the BBC had over-reacted to 'private' remarks showed an emphatic strength of feeling amongst Mail readers. 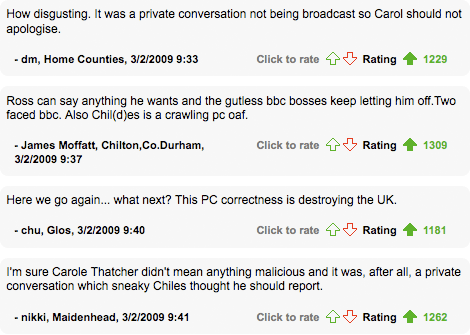 Users who expressed a contrary view, that the use of racist language, even in private, was unacceptable, received the 'thumbs down'. 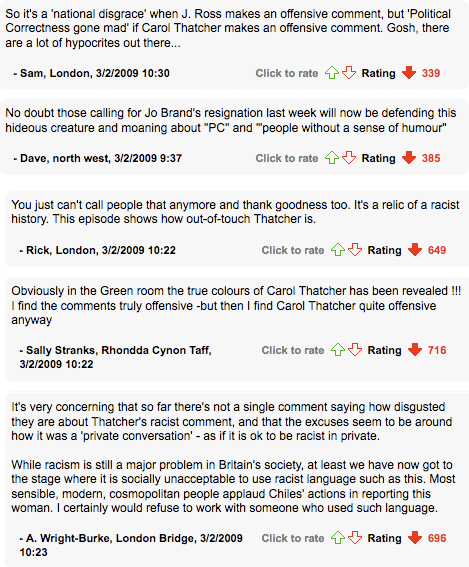 However, users are not simply sheep following the Mail's editorial line. This week has seen another chapter in the paper's coverage of Jonathan Ross, where they have re-printed comments Gwyneth Paltrow gave to Elle magazine about her appearance on his show back in April 2008. Here, users, and their votes, are quite clear that this appears for them to be a tired and predictable re-hash of old news. 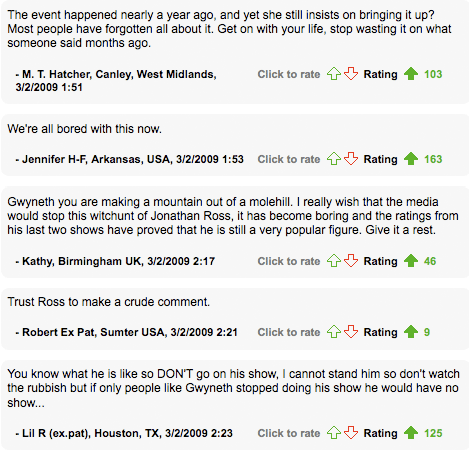 This is of a great value to the Mail. Their success has been built on being closely attuned to the interests and concerns of their audience. This system gives them a very quick way of measuring where that audience stands on particular issues. We are all familiar with the models that suggest that only a small percentage of users will leave a comment, but the voting system vastly increases that number.

On the Carol Thatcher story, at the time I took the screengrabs on Wednesday, there had been 125 comments published, but at least 54,000 'thumbs up' or 'thumbs down' votes received on the first page of comments alone - a staggering increase in interactivity. This is assisted by the fact that voting is 'light touch' - unlike the recommendations on the BBC's Have Your Say site, for example, you don't have to be registered with the Mail to participate.

The voting mechanism also empowers the audience to show their feelings about each other. On the same day that Carol Thatcher was in the news, the Mail was carrying a story about a sixteen year old who was killed in an accident whilst sledging in the snow. The first couple of comments left on the site were Richard Littlejohn style jokes about 'elf'n'safety. Other readers were able to quickly to show their disapproval that the teenagers tragic death was being used for political point-scoring. 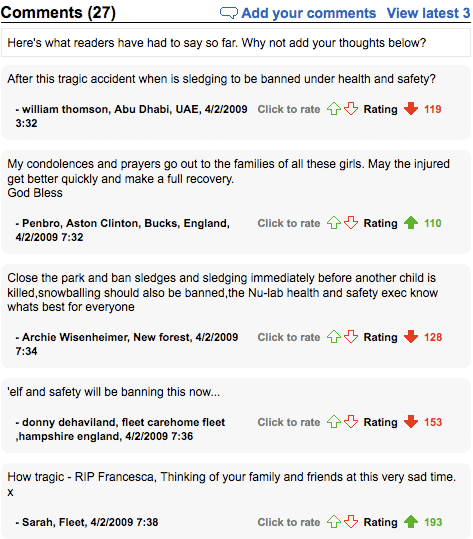 Of course, like any online voting system, it is open to some abuse, but I really think it helps bring the comments on the Daily Mail site to life, and encourages a much wider range of online participation from the Mail's readership.

You might also be interested in:
Has Jan Moir hastened changes to the way the PCC handles 3rd party complaints? - October 2009
Why the PCC is broken - a case study in trying to complain - February 2009
Daily Mail 'fat dog' article takes the copyright biscuit - May 2008
Game for a laugh - Anne Diamond on games in the Daily Mail - April 2008
Who's deceiving who? The Daily Mail on Jools Holland's Hootenanny - January 2008
The Daily Mail falls for internet myths about left-handed people - September 2007
Alt tags reveal what is on the Daily Mail's mind about child sex offenders - August 2007
Now the Daily Mail is twisting MY words about ChildLine - February 2007

Interesting view. I am less impressed as in my experience if the overall balance of comments is on one side of the story, then comments that support that side get net positive scores and those that disagree get net negative.

Weak, repetitive, unclear or eccentric comments get high net votes just because they agree with the overall balance. The votes seem to be used as another way of saying, "I agree with this side" regardless of the merit of the comment itself.

As the net scores don't really add anything beyond what reading the comments and seeing their balance tells us, I'm not sure what's so great about them?

If there was a system that meant the best (for some value of best, e.g. most well argued, most interesting etc) comments on each side of an issue were highlighted, that would be interesting. But in this case...?

Well, I think one thing that is significant is the sheer volume of them on the Carol Thatcher story, for example. I can't think of another UK newspaper that has a way of showing that it attracted over 55,000 interactions on one story in the space of 24 hours or so. It allows the site editors to see which stories have really struck a chord with the readers.

The one problem I have with the Daily Mail (besides the obvious!) is that they use arrows rather than the obvious thumbs.

The arrows are all rather meaningless and a little confusing given they don't move posts up or anything. So a bit of a usability flaw. Now true, it's a flaw that clearly isn't getting in the way, but could do better.

Alas I can't even put this as an original thought - Roo Reynolds mentioned it in a meeting and it just seemed so obvious a comment that I couldn't believe I hadn't thought of it. Green arrow for him :)

Thanks Andrew. I really should have blogged about it of course but, like you, I thought the marriage of design and function of the red/green arrows were slightly opaque, though perhaps it's less of an issue than I'd imagined. Only takes a second to work it out, I guess.

Martin, great post. I've been watching the Mail's experiences with their comment rating system with interest, and you've highlighted some excellent examples here.

Also, it doesn't show volume of people who vote each way. So an article might have 100,000 people voting yes for it, 100,001 voting no, and the net result would be -1, which isn't a good reflection of the numbers interested or the level of polarisation.