This week's series of posts on currybetdotnet have been looking at the performances of 24 hour news channel websites like CNN, BBC News, Sky News and Al Jazeera on social media websites.

Today I wanted to look at 3 other stations that featured as part of my social media survey - Russia Today, Euronews and France 24. 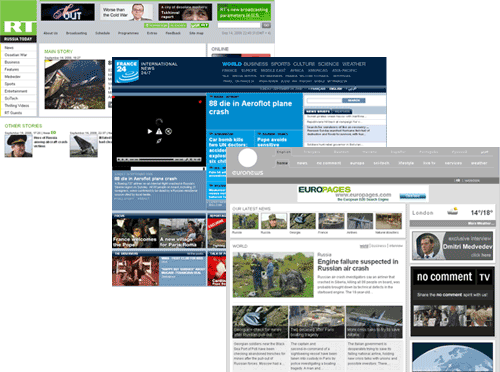 The armed conflict between Georgia and Russia over South Ossetia broke out during the period I was collecting the data. You might expect that this news story may have been what prompted the appearance of the site, however only 3 of the 5 stories concerned Georgia. The other two were of more general interest, featuring corruption in the Ukraine with 120 companies registered to exist in an empty electrical booth in Kiev, and speculation that submarines may kill whales.

Russia Today does not have any effective links to social bookmarking sites. At the foot of each story there is a text link with the call to action "Post this story to del.icio.us". However, the link simply leads to the del.icio.us homepage, rather than activating any specific bookmarking widget.

As well as Al Jazeera, Sky News, Russia Today, CNN and the BBC, I was also looking for links to Euronews and to France 24. During the course of the month I did not register a single URL from France 24 or Euronews becoming popular on any of the sites I was monitoring.

The Euronews site has been re-designed since the last time I took a close look at it, but still has no links to social bookmarking sites. The lack of success for Euronews is a shame, as amongst their quirkier content there seems to be plenty of interesting fodder for the ancient mystery lovers over at Digg.

France 24 does have social bookmarking link on the other hand, with icons inviting users to share stories on Delicious, Digg, Reddit and StumbleUpon at the foot of each article.

This table illustrates where Euronews, France 24 and Russia Today appeared on social media websites between July 15th and August 14th 2008. The presence of an icon indicates that the site has a social bookmarking link for that service.

Tomorrow I'll be publishing a table that compares the performance of all 7 television channels in the study.

Biggest social media site in Russia, in fact the biggest free press in Russia is Livejournal. It was recently acquired from SixApart by Sup - a Russian startup run by an American educated in London.