The blogosphere is awash with early reviews of Google's Chrome browser, but, as a Mac user, I've been struggling to get hold of it - and not just because the Mac version is still under development.

Initially, Google detected that I am in Greece, and so presented me a Greek welcome page for the Chrome download - full marks there for product localisation at launch. 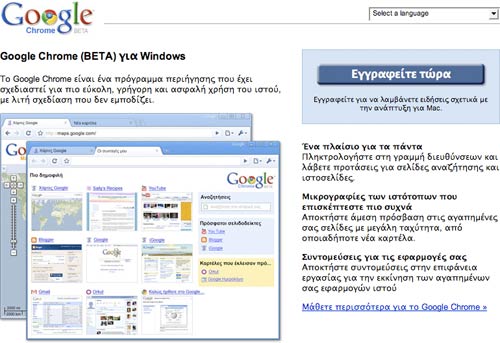 However, once I switched to English I found that Google had also detected I was using a Mac, and so I wasn't welcome at the Chrome download party. I was invited to sign up for information on when a Mac version would be released, but there was no link for me to download the Windows version.

"Google Chrome for Mac is in development and a team of engineers is working hard to bring it to you as soon as possible."

... And I reckon they'll get it finished more quickly than the Mac download version of the iPlayer as well!

Nevertheless, this was very annoying, as whilst my MacBook can roam free and pick up broadband wifi at the holiday apartments down the road from us, my Windows PC is tethered to a fixed telephone line which can only deliver 32kbps Internet speeds. What I wanted to do was use the broadband connection on my MacBook to download the .exe file to a USB key, and then install it on my Windows machine from the key, and have a play around.

No such luck - like one of those old-style websites that kept you out if you weren't running the exact version of IE4 they were designed for, Google would not let me download the Windows .exe file using Firefox on my Mac. If you went to the more details page, a 'Download Now' link appeared, but on the Mac it just led straight back to the Chrome homepage, rather than initiating a download of the file.

Eventually I had to borrow someone else's Windows laptop and use my USB key on that, although I suppose some good old fashioned user agent spoofing might have done the trick...

despite the rumors, i'm finding Chrome to actually be slower than Firefox; it hangs constantly... maybe they're still working out the bugs, oh well

Google Chrome is very fast, but with firefox i can have a lot of extensions... so... i keep my Firefox.

Google has released chrome in a hurry without doing last minute checking. A lot of security vulnerabilities are coming up though. And I also see they’ve released an updated version of chrome just after one week of the chrome launch. I'm sure more updates are to continue.