I try and be platform neutral and agnostic as much as possible. This blog runs on a Debian Linux server from Bytemark, I work on a MacBook, my main PC is a Dell running Windows XP, and I get to play with the Linux-based Eee PC that my wife takes everywhere. My star sign is Libra and I like a balance in my OS experience.

So I was fairly open-minded about trying out Microsoft's Silverlight.

There has been some (inevitable with a Microsoft product) bad press and bad vibes about it. People have called it a 'Flash-killer' - although mostly that was people who thought Flash was evil anyway. People have suggested that it is a trojan to take over the BBC's iPlayer as part of Erik Hugger's masterplan. Other people have viewed it as a way to move people towards using Microsoft hardware and Microsoft media codecs at the expense of competing formats.

I just, first of all, found it a pain to install.

One of the revelations of my conversion to being a regular MacBook user was the easy drag'n'drop way that Applications get installed. In fact, the first time I installed an Application under the watchful eye of an experienced Mac guru, I naively asked, "Erm, I've copied it to the Applications folder - now what do I do to actually install it?".

Not so with Silverlight.

Despite the repeated statements on the Silverlight site that this promised to be a 'lightweight' cross-browser cross-platform plug-in, getting it running on Firefox on a Mac involves an install 'wizard' and copious clicking of 'ok' or 'next' button, followed by a browser re-start.

Once I'd got going, I headed straight away to the Silverlight gallery, where Microsoft are show-casing uses of the technology.

The first example I tried to look at?

"There was a server error" 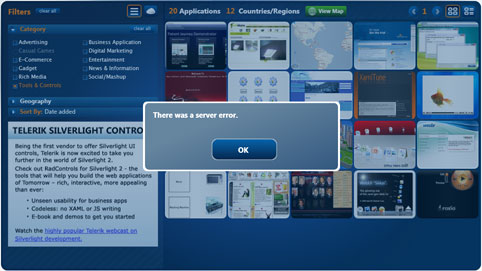 I've no doubt that, like Vista, Silverlight will gradually trundle its way around the corporate environment and be adopted by people who have spent so long investing in Microsoft powered infrastructure that moving off the Microsoft platform no longer makes financial or strategic sense for them. And, now I've got it installed, I daresay I'll not even notice when visiting a Silverlight-powered site, and I won't even think about it again until it starts to require a version upgrade.

But, for an 'experience platform' that is claiming to make the web more alive and media-rich than ever, getting Silverlight up and running was a joyless chore.

I asked exactly that question when I first installed something on my Mac. I had no experienced Mac user to hand so it took some time to figure out that I had in fact finished my installing job. When I realised that was all I had to do I knew I wasn't going back to a PC in a hurry.

I feel similar about the Mac. I actually think there isn't a huge advantage that OS X has over XP or Vista either visually or functionality wise, and my main machine is still running Windows XP, but I don't think I would buy anything other than Apple again.