As this years' Olympic Games have been progressing, I've been writing a series of posts looking at the complex history of politics, protest and dissent at the Olympics since their modern inception in 1896.

The first two summer Olympiads held during the 1980s both suffered from Cold War boycotts. The US led a coalition of countries who refused to attend Moscow in 1980, and the Soviet Union and the countries in their sphere of influence stayed away from the 1984 Games in Los Angeles.

With the 1988 Games due to be held in a country still divided by the Cold War, 1988 could also have been a potentially problematic Olympics.

Seoul was chosen to be the Olympic host in 1981, beating the Japanese city of Nagoya in a vote. At that time, the US boycott of Moscow had taken place, but their was no indication yet that the Russians would not compete in 1984.

The Games had an impact on internal politics within South Korea, and were considered to be a catalyst for the transition of the country to a multi-party democracy, with elections taking place in 1987. 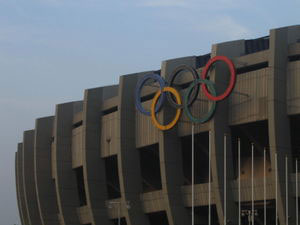 There was still room for a little bit of Cold War politics however. North Korea refused to take part, and Cuba, Ethiopia and Nicaragua joined them in staying away from the Games. For Ethiopia it was the third time in four Olympics that they had opted not to go, having also participated in the 1976 and 1984 Olympic boycotts.

It was to be a few years yet before Korean athletes could march together, at least at the Olympics, under one flag.

Los Angeles had been the only bidder for the 1984 Games, and Seoul and Nagoya the only bidders to host 1988. However, in the wake of the commercial success of the Los Angeles Games, the next bidding process, in 1986, was hotly contested. Barcelona beat Paris, Belgrade, Brisbane, Birmingham and Amsterdam for the honour of hosting the Games.

There was a security risk in holding the Games in Spain, since the country had a history of domestic terrorism by Basque Separatist group ETA. Catalonian nationalism could also have been a disruptive issue. The Olympic Stadium on Montjuic, for example, was named after executed Catalan national hero Lluis Companys i Jover. In any event the Games passed off without incident. 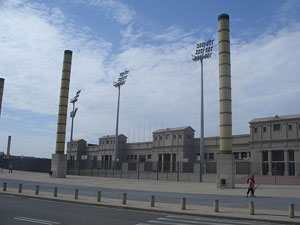 As it transpired, much of the politics was to do with the nations that were able to or allowed to compete for the first time in a long while. Bosnia-Herzegovina, Croatia and Slovenia all competed as independent nations, as did Estonia, Latvia and Lithuania. 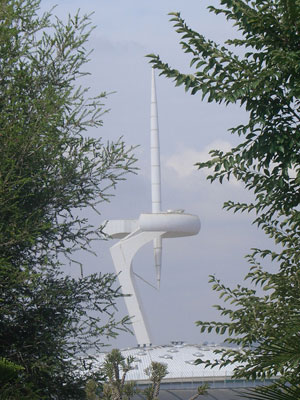 In contrast to those teams who had formed as the result of the fracturing of the Soviet Union and Yugoslav states, Germany was able to compete once again as a unified team representing one nation.

There was also a fantastic and welcome return to Olympic competition for South Africa after 28 years in exile, following the collapse of the odious apartheid regime. Elana Meyer won silver for the country in the 10,000 metres, and was joined by Ethiopia's gold medalist Derartu Tulu on a joint multi-racial lap of honour. 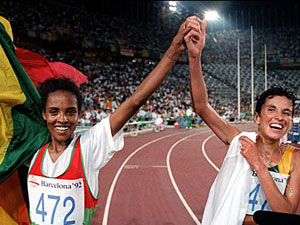 After two Olympics of relative political calm, the next Games, held in 1996 in Atlanta, were destined to be scarred by the second fatal terrorist attack at an Olympics.

After the successful 1992 Olympics the Athletes have just returned to Barcelona for the European Athletics Championships. A great event with up to 40,000 visitors cheering for the athletes, no matter where they were from. No Catalan separatism could be felt.