I've been writing a series of articles about how my music listening and purchasing habits have changed over the last 30-odd years, specifically looking at how different formats have affected the way I've assembled the 'playlists' of what I wanted to listen to. So far, it has all been about the analogue formats of radio, the Compact Cassette, and the vinyl record. And then the Compact Disc arrived.

It is probably a little unfair to have expected the music industry's executives of the time to have predicted the network effect of the internet, however, history may well eventually regard the introduction of the CD as the moment that the record industry collectively 'let the genie out of the bottle'. When they decided that the future of their business model was selling customers music stored as losslessly transferable digital data, they were laying the foundations for Napster, Kazaa, AllofMP3 and peer-to-peer piracy.

My parents bought quite an early Compact Disc player. This instantly re-instated the kind of musical divide that had existed in our house when they either controlled what was played, or had a monopoly on the use of the grown-up serious format. The first few discs they purchased were a roll-call of the big slickly produced albums of the mid-eighties - Fleetwood Mac's "Tango In The Night", Paul Simon's "Graceland", Dire Strait's "Brothers In Arms" and Peter Gabriel's "So". [1]

Without a player of my own, I tentatively began buying some music on Compact Disc. I could only listen to my CDs downstairs in the main room of the house where the CD player resided, which was a disincentive to purchase. And, as I was still buying music out of my pocket money, it meant a jump in the unit price I had to pay for an album. For a long time I continued to buy some albums on vinyl if I wasn't sure I was going to like them, or if, with something like The Wedding Present, I wasn't convinced the extra money was really going to bring me much in the way of the enhanced fidelity that Compact Disc marketing claimed I was paying the extra for.

The first CD I ever bought was the single version of "Birthday" by the Sugarcubes, because it featured an exclusive b-side. The first CD album I got was Talk Talk's "The Colour of Spring". I got it as a present at Christmas because I wanted to hear such a great album in CD quality, only to find on Christmas morning that when it had been purchased at Our Price the assistant had forgotten to actually put the disc inside the case. 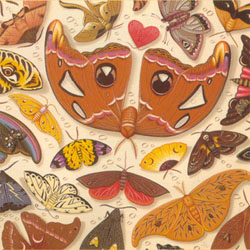 Of course, now we know that I was being ripped off, and the mastering of these early CD reissues was done with haste to get to market, rather than with care to get the best sound to the consumer. Well, that is the only way you can read the situation with hindsight if you went on to buy the 'newly improved remastered editions' that were all the rage once the initial rush of people replacing their vinyl with CDs had subsided.

Making playlists with a single CD

Actually, although the marketing push for CDs concentrated on sound quality and their supposed indestructible nature, it was the ability to easily skip tracks and re-program the listening order that was a bigger pre-cursor to the mp3 playlists of today, and the significant shift-change in consumption habits.

Prior to the CD, if you wanted to skip tracks on a record you had to physically go to the machine and re-position the stylus. And if you wanted to jump from track two on an album to track nine, it almost inevitably meant physically flipping the thing over.

Likewise, with cassettes, skipping between selections was a hit'n'miss affair, that relied on your manual dexterity with the fast-forward or rewind button. Some cassette recorders claimed to have systems that detected the beginning and end of tracks (Sharp's was called APSS for example), but these rather crudely relied on there being 3 seconds of silence between each song, and a very low-level of tape hiss.

CDs were a whole different story. You could skip tracks directly at the touch of a button, and you could program a disc to be played in a specific tack order. For me, this was the beginning of habitually being able to skip the 'filler' tracks on albums.

One of the earliest CDs I bought was 'Lovesexy' by Prince, having been a big fan of the commercially unloved 'Around The World In A Day' and taken in by lead single 'Alphabet Street'. Ironically, given how he later went on to complain about the music industry dictating terms and condition to him, Prince released that album as a compact disc that featured everything encoded into only one track. You had to listen to it in the order he had arranged the tracks, and in one whole session. [2] 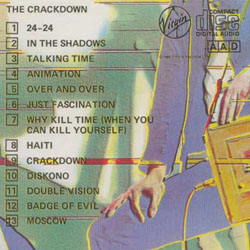 The next significant development in the way I made playlists was when I got my own Compact Disc player. And in a throwback to how I used to listen to my parent's 7" singles as a youngster, it was a player with an auto-changer mechanism.

[1] When I worked at Reckless Records, we tended to find that any sizeable CD collection being sold into the Islington store always featured those four albums. [Return to article]

[2] I think history has judged more accurately whether 'Lovesexy' was a fantastic work of art that should only be listened to in the way the artist intended. The first thing I did when I got a copy recently was to whack 'Alphabet Street' into Audacity so I could edit it down to the decent 2'30" bit, then put the rest of 'Lovesexy' in the recycle bin. [Return to article]

Odd: of all the people I can think of you'd have been the last one I'd expect to have waited a whole year to get a copy of The Colour of Spring. My distinct recollection, and I remember this clearly for reasons I cannot begin to understand, is that it was the first record I bought in 1986 which actually had "(c) 1986" on the label. It was released in the second week of January.

Or did you borrow it from one of the rest of us and get it later? You know, in that way which KILLS MUSIC and doesn't ever lead to increased record sales.

[This probably isn't the place to get into a holy war about our differing opinions on whether it was the last remotely-listenable disc Talk Talk ever released. Which, for the record, it was.]

I think I had a tape-to-tape copy courtesy of the boy Sutton. I know I bought the 12" single of "Life's What You Make It" (the double-pack version with an unsold over-stock a free copy of "It's My Life" on 12" as well), but I didn't have an original copy of the album until that Christmas.

Likewise, I remember going with Graham to Our Price in Walthamstow and getting the guy to play some snippets from "The Spirit Of Eden", and then going to Note For Note down the road and Graham buying it on cassette there. We went back to my folks house and tape-to-taped it for me, and for years I only had that copy, on a C60 with three tracks on each side. It was, of course, their finest hour... ;-)