A lifetime of lost playlists: Part 5 - Poised over the pause button

I've been looking at the different ways physical music formats determined how I organised and consumed musical 'playlists' over the last 30-odd years of being a music fan. So far, during the seventies, I've mostly looked at situations where I was at the mercy of my parent's tastes. However, as the eighties started, I had regular access to my own record deck in my own room, and soon got my own cassette-radio player.

Having my own cassette player rapidly transformed my music consumption patterns. It meant being able to purchase pre-recorded albums on cassette, being able to swap tapes with friends, and being able to record things from the radio.

In these days of pre-release single downloads on iTunes, streaming previews on MySpace, and leaked copies of albums doing the rounds in advance on peer-to-peer networks, it seems rather quaint to think that you had to rely on the radio for new music. As a budding music fan, when a favourite artist had a new single coming out, the only way to get a copy in advance was to hover over your tape deck, listening to the radio, with your finger poised over the pause button.

Sometimes I'd record whole radio shows. My parents didn't approve of me staying up all night to listen to Capital Radio's Reggae Show, for instance, so I used to record it. This somewhat defeated the object, of course, since I had to stay awake until the show was at least 45 minutes in, so that I could turn the tape over!

Other shows that I taped tracks from were the Sunday Chart Show on Radio One, and then later in the eighties, the John Peel show and the Annie Nightingale Request Show. 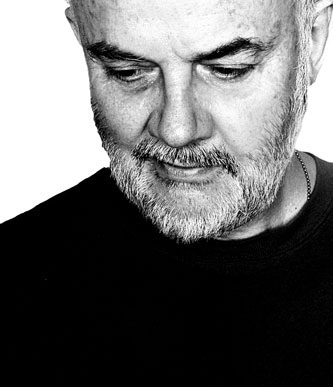 Now a little older, and armed with our cassettes, my sister and I got to have more say on what was played in the car during long journeys. My sister's choices would no doubt feature on any all-time playlist of my 'most listened to' tracks. I'm sure that she always used to pick to play the "An Innocent Man" album by Billy Joel on virtually every journey for a couple of years purely because she knew how much I detested it. [1] 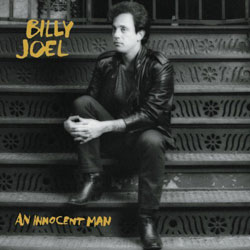 She also had a cassette version of "Now That's What I Call Music 3" that saw sterling service. I didn't mind that as much as Billy, because amongst the pop pap it featured "Red Guitar" by David Sylvian and "Dr. Mabuse" by Propaganda. [2] 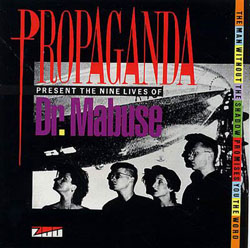 Cassettes became the mainstay of my music consumption through the late seventies and early eighties, and facilitated the next step change in the way I made 'playlists'. I have an uncle who is about 15 years older than me, and in the early 1980s he was a twentysomething who was out clubbing at weekends and avidly buying new records.

I was just discovering music beyond the mainstream radio, and he had a massive collection of great albums and 12" singles for me to record onto cassette. I had tape recordings of pop albums by the likes of ABC, Haircut 100, Depeche Mode, but I also had compilations of things like David Bowie, Roxy Music and Led Zeppelin which I put together out of his record collection. In fact there are quite a few major artists whose material I know mostly through my familiarity with these 45 or 90 minute compilations I made of the tracks that appealed to me on first listen, rather than through their proper albums.

Making these tapes was, of course, a way of making what in today's mp3 player era we would call "playlists". I would skip through the tracks of a few albums by an artist, and then make up one side or both sides of a C90 with a selection of the tracks that sounded good to me.

I didn't have any reliable way of making tape-to-tape copies at home, so once I made a cassette it stayed fixed that way - whether it was good track selection, or there were mistakes on it. I used to have, for example, a fantastic compilation of early Human League 12" mixes and b-sides, except for the bit in the middle where I had unwittingly recorded the tracks from the "The Sound Of The Crowd" EP at 45rpm instead of 33rpm. 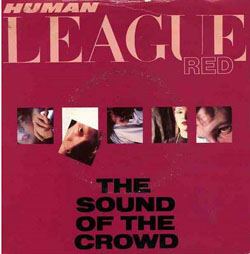 Another long-standing error was that my recording of ABC's "The Lexicon Of Love" was missing the climax of the last track, because I had put the 12" mix of "The Look Of Love" in the middle of the album, and that pushed the total length of the album over the inflexible 45 minute mark of the cassette tape. Whenever I dig the album out these days on CD, or, more likely, cue it up on my iPod, I still get surprised when '4ever 2gether' doesn't hastily fade out, and that there is a reprise of "The Look Of Love" tacked onto the end.

If you've grown up used to having software that tells you exactly how much spare space you have left to burn a CD, the idea that when you started recording an album you didn't even know if it would fit onto the cassette you were using must seem pretty alien. Playback was pretty inflexible - you made a tape and it stayed that way. Manipulating the playlist was a clumsy process, and one that is also alien to people used to current music technology. You got quite skilled at knowing exactly how long it took to fast-foward through 3 minutes of cassette, so that you could reasonably accurately skip tracks.

The metadata applied to blank cassettes was almost exclusively applied by biro, whether it was to the label of the cassette or writing out tracks by hand on the inlay card. Making entirely custom cassette inlays began to become a common hobby, as illustrated in Thurston Moore's "Mix Tape" book. 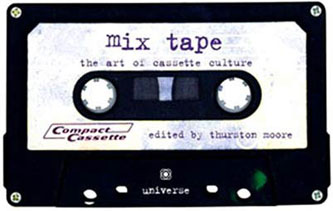 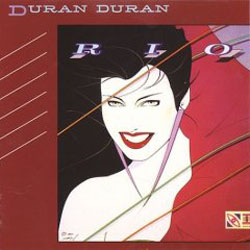 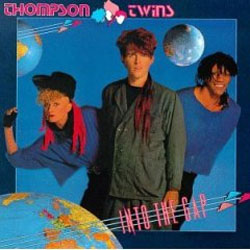 In the next part of this series I'll be looking at how I made playlists once I started buying my own records.

[1] In a bizarre co-incidence, it turns out that at a similar time, halfway around the world, my future wife was also developing a keen dislike for this album because her mum used to always play it in the car on long family journeys or at parties. Between us we could probably sing the whole album acapella! [Return to article]

[2] This cult half-hit, which only reached #41 in the UK, must have featured as part of the deal that also saw Frankie Goes To Hollywood's rather more successful "Two Tribes" appear on the album, which had also been a ZTT label release. [Return to article]

Ah the joys of finding yourself with a three minute gap at the the end of your C90! Or the wonders of accidentally knocking the record player during record. I did it whilst recording Parsley, Sage, Rosemary and Thyme onto a tape, and didn't notice because the result was so tiny. But it was still noticeable enough that when I got it on CD years later, I was a bit confused.

Tape compilations got so much easier once CDs came along. I can't have been the only one to diligently check the length of each CD I wanted on the tape, and then make sure it all fitted!

In later years I actually had an Excel spreadsheet set up where you could put in the track-times, and it would keep a cumulative total, so that you could play around with a track-list until you got the optimum recording time per side of a tape. Sad, sad, sad.

Sad... but clever. Why did I never think of that?