As part of their sponsorship of Euro 2008, Castrol have developed a website which produces real-time performance statistics during the matches. Here, for example, are the figures from the Netherlands' obliteration of France last night. 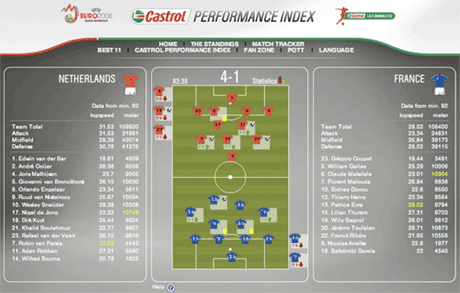 It looks like a very nice site - even if they can't spell 'defence' the European way. There is a downloadable Castrol widget for the tournament as well.

It is built using Adobe's AIR, so in theory it should be cross-platform. I didn't download it to my Mac though, because the application is unsigned and seems to want an unwarranted amount of permissions to access my file system, which is a shame. 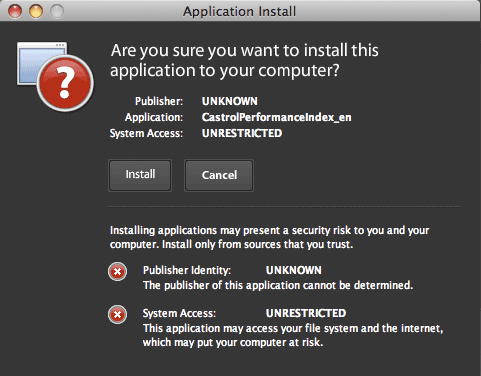 Still, the real reason I was writing about it today was because as I was testing some AdWords to promote my own Euro 2008 Fansivu, I noticed that whilst Castrol are measuring team performance at Euro2008, they don't appear to be measuring their AdWords performance very carefully. This is how their advert currently appears on the very expensive 'Euro2008' keyword. 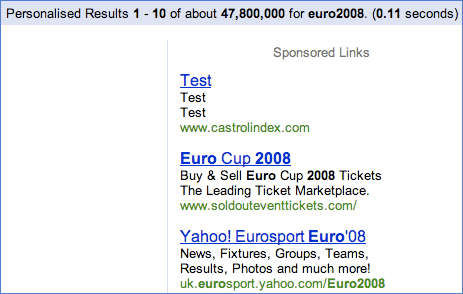 Just checked the castrol site, its pretty impressive all the stats.
In the Sweden - Spain match Zlatan ran less meters than the goalkeeper.

Hello Martin,
During the set up of the Castrol Performance Index campaigns (we have activity in 6 Markets) we used the ad copy version "Test" as a placeholder for the UK only. Unfortunately, when we uploaded this campaign we didn't remove the placeholder from the brand part of the campaign.

As for all our campaigns we run more than one version of ad copy. Therefore, the respective campaign has generated quality traffic as the Google system did not display the "Test" ad copy too often due to bad CTR (which is understandable).

However, as we are measuring the success of the campaign frequently, we spotted the mistake during our optimisation activities and removed it immediately.

Hi Steffen, thanks for dropping by and clearing that up - I'm not surprised the CTR rate was low - although it was still possibly more than I am getting for my Euro 2008 Fansivu campaign!