In my series of posts looking at the national association websites of the teams involved in Euro 2008 I've so far looked at the sites that belong to Austria, Croatia, the Czech Republic, the Netherlands, Romania and Switzerland, Portugal, Turkey, Germany and Poland.

That means I've not looked at any teams from Group D yet, and, if my ticket application had been successful with UEFA, I would have been back in my old home Salzburg preparing to watch defending European Champions Greece against Russia. But my bid for tickets wasn't successful, so, instead, I'm in Greece, looking at the kind of coverage being provided online. The other Group D game tonight is taking place in Innsbruck, and so I'm reviewing the official FA websites from Sweden and Spain.

The Svenska Fotbollförbundet have one of the most advanced and modern websites I've seen in the whole of this survey. 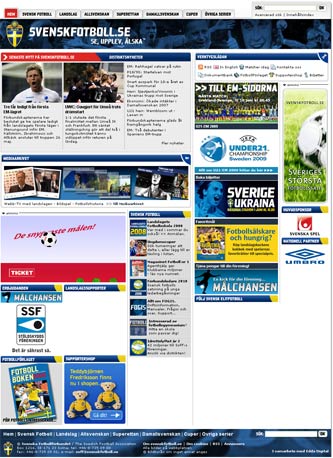 For a start, they are the first FA site I have seen so far to include a news RSS feed, available from the homepage in a 'tools' panel, which also includes the ability to visit the website in English.

The Swedish FA site has a whole section dedicated to Euro 2008, with a slightly different look and feel provided by the banner. There is plenty of the kind of content you'd expect, including squad profiles of the Swedish team. 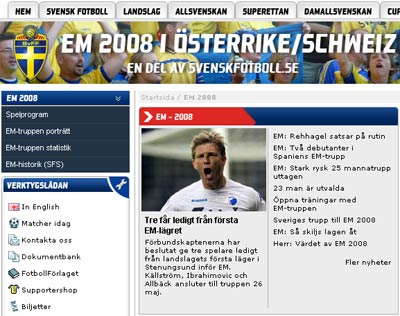 As well as generating their own stories in the build-up to the tournament, the Swedish FA have also embedded a headline feed from UEFA.com, in order to give wider news coverage. This seems a very resource-light way of giving a better and more comprehensive service to Swedish fans. 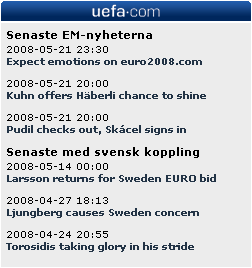 A major feature of the web site is the Swedish FA Webb-TV channel, which carried a series of news clips leading up to the start of the tournament. 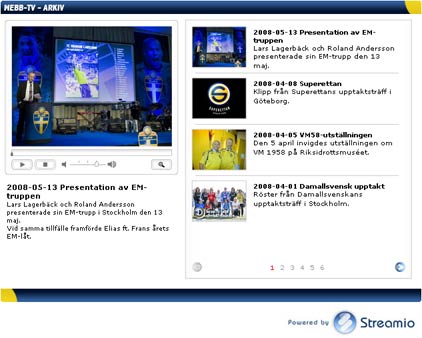 As well as video clips on the current squad and their trip to Euro 2008, the Swedish FA web TV offering has an entire media archive of the history of Swedish football.

Spain have already under-performed at one of this year's major European tournaments, with 'Baila El Chiki Chiki' failing to hit the heights of Eurovision. It certainly made an impact though, as it seems to have been endlessly parodied on Greek TV. Whether the Spanish Euro 2008 team can avoid becoming a laughing stock remains to be seen - although their opening demolition of Russia suggested that, for once, they might just live up to the hype. 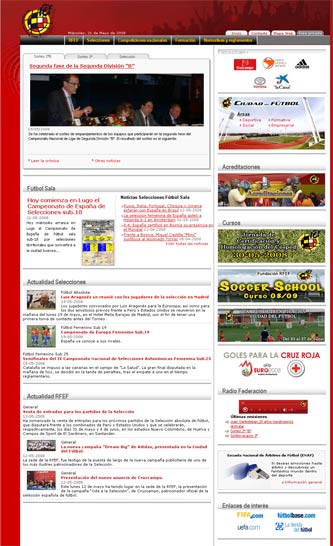 The website for the Real Federación Española de Fútbol did not have a heavy presence for Euro 2008 on the homepage. In fact, the clearest reference to the tournament was a graphical promotion of the tournament's "Score for the Red Cross" campaign. In the news section, for example, the fact that Spain's racist coach Luis Aragonés had announced his squad was given equal billing with news of the Spanish Women's Under-19 squad. 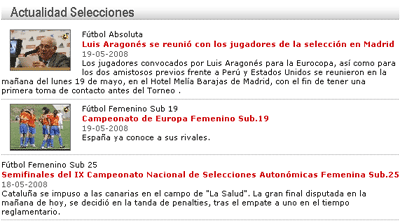 I couldn't see any interactive features on the site like votes or user forums, nor was there an RSS feed of any content.

One unique thing the site did have, however, was a radio station. This featured short audio-clips that covered official announcements from the RFEF, as well as short interview pieces.

I've just got four teams left to cover, and so on Tuesday I'll be looking at the websites belonging to two of football's most successful and powerful nations as they go head-to-head in Group C in Zürich - France and Italy.