I got an email alert from YouTube a while back, informing me that someone had left a comment on my YouTube clip of a monkey teasing a pig which we saw in Salzburg Zoo last winter. 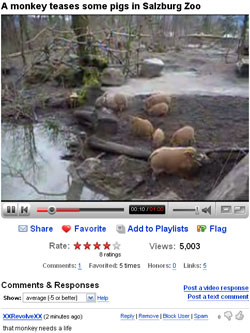 "that monkey needs a life"

I was just in the middle of composing some witty retort about pots / kettles and the fact that XXRevolveXX had frittered away a minute watching the monkey with no life, when I noticed something I found astounding on the page.

I also recently enjoyed a piece which I read in Bloglines but have distinctly failed to track down again, which pointed out that there is a growing generation gap. People who grew up on a diet of purely professional media don't understand the voracious consumption habits of the younger generation for DIY fare.

What caught my eye on my YouTube video as I was about to respond to the comment was that in the space of a year, my monkey clip had been viewed over 5,000 times.

It is quite sobering to think of all the effort that goes into writing the posts on this blog, and then realise that my badly filmed, poor resolution video clip of an, admittedly, funny monkey, has proved more popular than all but a handful of the posts I wrote last year. 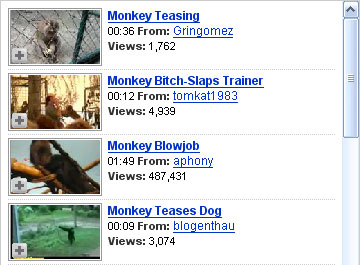 You're not the only one - I've written thousands of words on my blog and made a tonne of YouTube videos in which I try to be entertaining... yet the most popular video I've put on YouTube is one of my Grandad playing Wii Boxing.

I actually received an e-mail from the BBC, who wanted to show one of my videos on Lily Allen's new programme. "I've made it! My hard work has paid off!", I thought... until I read on and discovered they wanted to show my Grandad.

Clearly the lesson here is "never make an effort to do anything"!