Postcard from Macau #1: Selling adverts in the Chinese 'free' press

One of the English language newspapers available in Macau is the South China Morning Post. The first weekend I was in the country, an article in the Post's sister paper, The Sunday Morning Post caught my eye. It was a profile of a Beijing newspaper man named Wang Yu.

In his Q&A session, there were some similarities with Western and British newspapers, but also some marked differences.

"It depends. Like any other industries, people respect those who work hard and deliver accurate news and despise the ones who compile news simply to get a reaction. I know there have been reports on how reported cheated or faked stories, and the whole industry felt ashamed. But looking from a different angle, it just reflects how fast the industry has grown in the past decade and how deep the media's influence has penetrated into society. People know when you are wrong because they pay attention".

I'm not entirely convinced the British newspaper media feel a collective sense of shame every time someone is outed for faking stories.

Wang Yu shrugs off suggestions that the state ownership of media in China implies self-censorship and the use of a system to 'filter' out undesirable news.

"To be honest, I have never been aware of such a system, even though from time to time some sensitive subjects are blocked on a case-by-case basis. The key here is state owned. Just as listed companies have to be responsible to their shareholders, this newspaper also has to be accountable to its ultimate owner, the state. But this relationship does not necessarily mean we have to agree with or support everything the state does. If you follow state media closely, you will realise that more and more stories criticising government policies and behaviour are coming out on a daily basis. In sectors like business and social news where competition is severe, there are almost no boundaries on what you can report - it's about how capably you can report. If you talk about a hidden agenda, I think every newspaper, including foreign ones, has its own agenda, which may vary based on the paper's ownership and the readers it serves. Chinese newspapers do share a mutual understanding with the government - they want China to be a better country and its people better served. If you call that a bias, so be it".

The other interesting point he made was about a shift in funding. In contrast to Western newspapers, who are struggling to come to terms with the fact that the value of their physical product is increasingly being eaten away by free news on the net, the Chinese press is only just getting to grips with selling print advertising.

I'd link to the original article, but if it is online, it is behind a subscription firewall. As are, it seems, the South China Morning Post's RSS feeds. 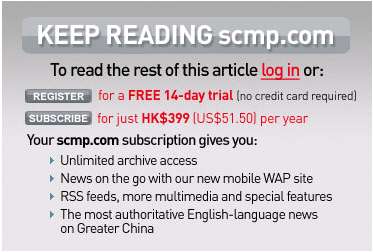 Maybe someone needs to tell the Chinese press that, if the experience of the Western press is anything to go by, relying on print advertising and online subscriptions may not necessarily be the right model needed to survive in the medium term, .