Making the most of blog comments: Part 2 - The 100 blog survey

I wanted to get an idea of how popular these methods were, so I did a survey of 100 blogs. 100 isn't a big enough sample to be truly representative of the blogosphere as a whole, but it is enough to give some pointers as to the relative popularity of the different ways that comments can be highlighted.

I derived my list of 100 blogs from four locations. I picked the top 25 most popular blogs by their Bloglines subscription numbers, excluding those from mainstream news publications and TV stations. Then I took 25 blogs from my own reading list. Next I took 25 blogs at random from the Ice Rocket search engine by searching for a couple of bland keywords likely to appear across a range of blogs. Finally I started looking at the upcoming blog posts on Technorati until I had completed my 100.

Did they feature comments?

The first check I made on the blog was to see if it took comments. Although generally the interaction with users is seen as a vital part of blogging culture, not all blogs accept comments. For major publishers this can be to avoid the headache and overhead of moderation - for smaller publishers it can be to avoid the chore of fending off spam. The vast majority do though. In my sample of 100, I found that 90 of the blogs did - a nice round 90%. 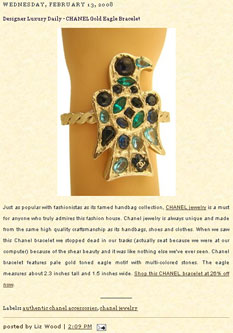 It has become convention on the homepage of a blog to list underneath an entry some metadata associated with that post. Often this consists of the name of the author, a link to the entry's individual page, a category or categories that apply to the entry, and the time and date the entry was published. Often this metadata also includes a link directly to comments on an article, with an indicator of how many comments have been left so far.

My second test of my 100 blogs was whether they included a comment count for each entry on their homepage. I found that 86 did. This represented just over 95% of the blogs I looked at that featured comments.

The four blogs that accepted comments, but didn't have a count next to the comment link on their homepage were A List Apart, iMedia Connection SEO Blog, Next Generation Blog and The Plum Daily.

Who Knows Where Thoughts Come From? labelled comments as 'Additional thoughts', whilst Blue Crab Boulevard called them 'Responses' and Silicon Alley Insider simply used a speech bubble icon with a number next to it.

Bark Bark Woof Woof appropriately opts to bark out 'Speak!' as a command to visitors when a post has no comments, and then measures increased engagement in barks and woofs. 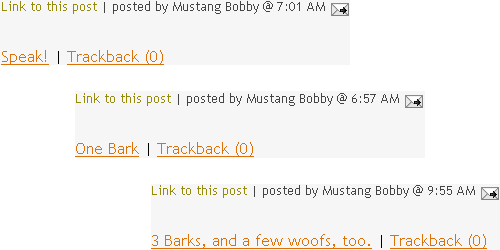 Was there an RSS feed of comments?

Some blogs provide an RSS feed specifically of the comments that have been left on a post. In my sample, this was particularly seen with people who were using Wordpress as their blog CMS. Many Wordpress themes feature a link to not only a feed of the blog posts, but also a feed of the comments in the 'Meta' area of the page. I found 13 of the 100 blogs had an RSS feed which featured an aggregation of comments from all posts.

Was there an RSS feed of comments on each individual post

Both the Wordpress and the Blogger platforms make it easy for authors to provide a unique RSS feed for each entry which lists the comments that have been left in response to the original post. Just over a quarter of the blogs I looked at provided this type of feed.

These RSS findings clearly represents one metric where the author's choice of platform, and whether they deploy the templates 'out-of-the-box', makes a big difference to the figures. It seems likely that this feature was enabled on many of these blogs because it was the default setting of the theme they choose.

Tomorrow I'll be continuing to look at the 100 blogs, examining if they display lists of 'recent comments', or whether they allow users to rate and manipulate the comments that have been left.

Hi Martin, interesting survey. Fun to see you've included my humble blog in the list. I recently added a subscribe to comments over email feature to my blog and get the impression this is by far the most effective way of keeping people involved after they comment.

Hi Kars, yes, I've been working on a re-jig of the the templates here, partly as a result of this look at comments. I want to improve the way they work, and add feed options. I'd like to ad email subscribe to comments too, but I think that means a Movable Type upgrade to version 4, which I am a little nervous of, since at the moment I have the whole blog working 'just so'.

Martin, great survey of the blogs but I have to ask you if there is a relevance with the use of a certain type of blog platform for certain features that some of the blog owners have or have not chosen to publish.

I'm working through your series and really appreciate the methodical analysis you're providing.

One new thing I learned from this is about changing the name of the comments to something more relevant to your blog. The bark-woof idea was really clever and "additional thoughts" would entice me to read them more than just the generic "comments". Might try this with my food blog but don't want to go too cutesie.

You could ask people to 'Add their ingredients' or to go for some 'Extra courses'? ;-)

Seeing an alternative to common terms is always going to be refreshing for your visitors. Like the bark woof thing, it'll be good for your theme and will let you get more keywords in your site for the SEs.

its easy to think of a few good "leave a comment" replacements for your theme. Just needs a bit of imagination like "blow this" for a glass sculpture blog and "stick your nail in" for a DIY blog.

Oh we are playing who can come up with the most metaphoric "leave a comment" alternatives? haha

Regarding the graphs, I think nowadays when someone is making their new blog they will want as many plugins that can stuff in it so we will see a slow transition from blogs without those extras (RSS feeds, comment count etc) to ones that do. RSS was developed around 1999 so I'm not sure if it has anything to do with age of the blog since from your graphs only about a quarter have RSS enabled in some way.

"Add your pee to the pool" - Swimming blog?
(im not good with things like this sorry :P)

Maybe you could make it dynamic with regard to the length of the comments that have been left. Short comments could be "whispers" and average length could be "louder than a whisper?" and very long comments could be "rants" :P This could give the visitor a quick idea of how good the content must be in addition to how much extra content is there to.

You are doing good job Martin Belam explaing step by step what is happening through blogging with figures.