The interweb's tubes have been buzzing that Flickr users are already in open revolt over Microsoft's offer to take-over Yahoo!, Flickr's parent company. 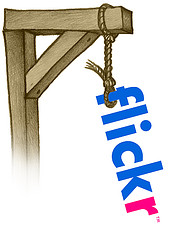 "I'm not cross and I'm not bitter - I'm just a little sad because I have a belief that things can be good/great without taking the obvious route". - grange85

"My fear is that over time they won't be able to resist tinkering with their new acquisition and eventually end up breaking it". - groc

"in a futile and self-defeating symbolic gesture i have instituted on flickr a boring protest in which i am posting seemingly endless series of pictures of coalhole covers and doorknockers. of course, since i have started doing this interest in my stream has slowed to a muddy trickle and the only people in the least affected are my good friends with whom i have shared more interesting times". - peter pick

"I'm backing away from Flickr a bit. I've realized over the last 36 hours that I can't seem log on to the site without a feeling of tremendous anxiety, anger, frustration, despair, etc." - Visual Cues

...all of the quotes in this article are actually from previous Flickr user protests against Yahoo! after their purchase of the site in March 2005 ;-)

If microsoft do take over yahoo, then I might go back to flickr. Yahoo are much more evil than microsoft.