Copy-protection for vinyl in the 1970s

When I was thinking about an iconography for DRM, I began to think back to the old days of recording vinyl onto my portable tape deck using a 5-pin DIN plug to connect the two machines, the advent of tape-to-tape decks, and being poised over the pause button to record tracks from John Peel sessions. It was all so simple and blissfully analogue in those days, without a hint of copy protection in place.

I dimly recalled that there was a form of copy-restriction placed on some vinyl albums. A high-pitched frequency was pressed into the album, which was inaudible to the human ear during playback, but which would destabilise the process of recording the album to cassette tape.

The reason I remember it more than anything was that a family friend had built some sort of decoder to eliminate the frequency, and was hoping, should it become widely adopted, to become rich on the back of selling little gizmos that would strip this primitive analogue rights management from recordings.

Unfortunately, copy-protection for vinyl appears to be one of those technological developments that seems to have slipped down the internet's collective memory hole. I couldn't find very much about it on the web at all, and of the stuff I did find, some of it seemed wrong or difficult to verify.

It may be that this was more common in the USA than the UK, but take this claim in Ram Samudrala's 1998 paper 'Creativity and ownership: where is the balance?' that:

'When recording artists started objecting to this (Elvis Costello released his album Almost Blue with a sticker indicating that it didn't contain a spoiler signal), the industry gave up this effort.'

As far as I'm aware the album did come with a sticker on the front in the UK, but it was one that was defensive of Costello's move into 'genre' music, rather than a protest against anti-piracy measures:

'Warning: This album contains country & western music, and may be harmful to narrow minds.' 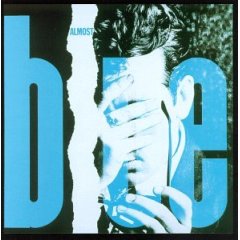 Then there is this 1999 article by Barry Fox from the New Scientist - "The pirate's tale". This puts the origination of this tactic down to The Beatles:

'It didn't take the recording industry long to see the danger [of the compact cassette]. When the Beatles founded the company Apple, they hired a colourful Greek character called "Magic Alex" Mardas. Together they hatched a plan to put a "spoiler" signal on the Beatles's next album, Sergeant Pepper. The record would play normally, but anyone who tried to copy it onto a blank cassette would find their recording ruined.

Magic Alex added a 20-kilohertz tone to the music, a frequency just above human hearing. But when the signal was copied onto tape, it interfered with the similarly high "bias frequency" which analogue tape recorders use to mobilise the magnetic particles in recording tape. The two signals produced a lower "beat frequency" that sounded like a whistle.

Although the spoiler worked in the lab, with engineers who wanted it to work using high-quality equipment, the real world is nothing like this ideal. Needles on domestic record players ignored the signal, often physically destroying the delicate groove in the vinyl that produced the spoiler. Even if the stylus did read the signal, it was usually filtered out by unwanted capacitance and inductance in the connecting leads. So people who bought Sergeant Pepper found that it copied perfectly. Apple and Magic Alex abandoned their idea.'

This is almost certainly wrong in attributing the development to The Beatles. "Magic Alex" Mardas was not the revolutionary engineer he portrayed himself to be. In 1995, in an article about what became of The Beatle's hangers-on, The Independent described him as:

'The Greek TV repairman, set up in Apple Electronics by the Beatles, who promised to build an artificial sun, a telephone you told who to call, wallpaper loudspeakers, a house which hovered supported by an invisible beam, and even a flying saucer. Not one invention was made, and the recording studio he built proved unusable and was demolished. Allen Klein fired him, and he has since disappeared.'

Additionally, Sergeant Pepper was released by Parlophone in 1967, not Apple. The Beatle's first album release for Apple was the double-vinyl set that became commonly known as "The White Album".

It may be that this story is due to confusion with the fact that Sergeant Pepper does in fact contain a very high frequency signal on it - but only for a very short duration. At the end of side 2 on the original vinyl release, the long drawn out chord that closes "A Day In The Life" leads into a short snippet of nonsense noise that repeats infinitely in a locked-groove.

Just prior to this, a very high pitch frequency is included, designed to attract the attention of any dogs who were around when the album was being played. However, it was included as a joke for a couple of seconds, and not as a serious attempt to prevent home recording of the album.

Where Barry Fox wasn't wrong was in his assessment that the system didn't work very well. Repeated plays of vinyl dampen the ability to reproduce high frequencies, and it seems that often the spoiler signal was either audible during regular playback, or didn't have sufficient impact upon recordings. Either way, after a few plays it was destined to disappear due to regular wear and tear on the record's groove.

In the end, the best information I found about this 1970s development with vinyl copy-protection was included as incidental information on this Google Answers thread - 'Did Recording Industry Intend Compact Discs (CDs) to Have Copy Protection?'

It seems a shame that the history is not more widely available on the internet.

You see it looks like in the 1970s the music industry tried to stop people copying their content, didn't do it very well, made themselves unpopular with both the consumer and the artists they are meant to represent, and eventually had to recant. What is it they say about those who fail to learn from history?

Also, re:Magic Alex, it was decidedly implausible that cassettes were killing the record industry *so* much in 1966/67 that The Beatles felt they had to do something about it. 1977 possibly maybe, 1987 for sure, but '67?

Thanks for the reminder of the 80s tone though... always thought it died in the lab though, as I never heard or owned a record that had it (or claimed to have it!), and I've taped a few elpees in my time.

Yes, I thought that too, but according to my primary research, i.e. the Compact Cassette entry on WIkipedia, cassettes were introduced to the European market in 1963, and pre-recorded cassettes were available from 1965

Indeed, but it wasn't until the late-seventies that the quality of the tapes (and the decks) made them a worthy sound quality competitor for vinyl - otherwise we would have had pre-recorded cassettes a little sooner - I think they started to seriously take hold around 1973-4, but the quality was seriously variable until the mid-80s (and by then it was too late). I got the "Collection Of Beatles Oldies" on cassette as a present when I was 5 along with a mono radio-cassette player - It sounded lousy but The portability was far more important than the sound quality.

Hmm. Is that the sound of deja vu I just heard whistling past?

Thanks for the insightful article.

I'm currently in the process of writing a thesis on TPM and, as you also contend, I've been trying to show it's not a new phenomenon. I was unaware of the primitive TPM on vinyl you mention, but have, in a similar vein been trying to find out more about the crude TPM that used to be employed on cassettes, namely the little plastic tabs on the spine you could remove to prevent copying, and how easily you could circumvent it on commercially available cassette albums by putting sticky tape over the holes. Given that Sony's rootkit TPM was also circumvented with appropriately placed gaffer tape, it does indeed appear as if very little has changed.

Is the cassette TPM I mentioned something anyone else knows more about?

I was listening to my vinyl copy of Elvis Costello's Almost Blue tonight and was intrigued by the "no spoiler signal" caption. I thought I'd google the phrase, and your page was the only result.

But aside from the sticker on the front that warned it was a country music recording, there is in fact a small logo stating "NO spoiler signal" on the back of my record sleeve.

It looks like that tiny notice on the back of Almost Blue may be the only evidence that spoiler signals ever existed.

@Chris Lever: the breakout tab on an audio cassette isn't to prevent copying. It's a write protect tab.

Makes me think that we should all go back to vinyls for distributing software and movies. It seems like a great way to thwart anyone wanting to make a crystal clear digital copy lol :)

This whole thing sounds fishy. I have never heard of this before and was buying and recording vinyl albums in the 70s. No research seems to be able to backup this theory at all.

Chris_B, when you say 'no research seems to be able to backup this theory at all' are you including the fact that someone I know worked on a way to defeat the system, the Ram Samudrala PHD paper referenced in the Google thread, and the comment above about the Elvis Costello album containing the 'no spoiler signal' message on the back? ;-)

I was also buying vinyl in the 70s, and never came across a album protected in this way, so it seems like if any made their way into the public domain it was a very small number of pressings or titles used as an experiment. It clearly failed anyway.

"...according to my primary research, i.e. the Compact Cassette entry on WIkipedia..."

Not sure what you meant, but Wikipedia is NOT a "primary source" proper by any measure of research work. It would be secondary at best and tertiary in most others.

Sorry Bill_B, I think the sarcasm of that line may have passed you by...