There has been some righteous indignation in the arts press this week about the philistines at the BBC declining to commission the Tony Palmer film about composer Ralph Vaughan Williams. 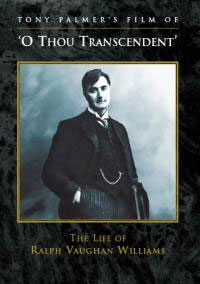 In The Observer, Mary Riddell was moved to opine that "Our national love of tackiness is killing culture".

Much of the ire has centred around the ludicrous rejection letter that Palmer received from the BBC. As quoted in The Observer, it read:

Having looked at our own activity via the lens of find, play & share, we came to the conclusion that a film about Mr Williams would not be appropriate at this time. This is essentially because we are... reconstructing the architecture of bbc.co.uk, and to do that, we need to maximise the routes to content.

We must establish the tools that allow shared behaviours, and so harness the power of the audience and our network to make our content more findable.

I couldn't help but find that the phrases used rung a distant bell in my head. Find, share and play are the three cornerstones of bits of the BBC's strategy on the internet - services should help people to find content, share it, and play it.

Here is the transcript of a speech given internally at the BBC by Simon Nelson on September 26th, at the BBC Vision Multiplatform day which I attended a couple of sessions of:

So having looked at our own activity via the lens of find, play and share we came to these conclusions:

* It is essential that we re-construct the architecture of bbc.co.uk to increase findability and to do that we need to maximise the routes in to content 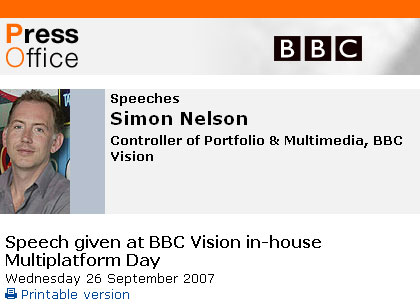 That rather leaves open the question of whether somebody at the BBC was doing a very poor copy'n'paste hatchet job of their rejection letters, or whether Tony Palmer has misconstrued or misquoted what was sent to him as being a personal rejection letter for an individual project.

The BBC isn't coming out of this with much credit though. Whatever the origin and veracity of the email, given that the bulk of the words being quoted were said by the Multimedia Controller for the BBC's television output, having your spokesman suggest it can't be taken seriously seems a little, how shall we say, off message:

Television arts commissioning can find no record of receiving a proposal from Tony Palmer. This rejection letter did not come from them. We are unable to take this letter seriously without seeing it or being given the name of who sent it.

And that is leaving aside the question of whether a member of BBC staff was really suggesting they might reconsider if Mr V Williams could come up with something new in the next few months.

It isn't all bad for Tony Palmer though. His film is being shown by Five on New Year's Day. And, in what The Telegraph's review described as an 'unusual move', last week, prior to transmission, it was released on DVD - http://tonypalmerdvd.com/. How fortuitous for him that all that publicity over the mysterious BBC rejection letter should break at the very same time...

A very odd one this.

This just doesn't feel like the kind of letter a Commissioning Editor in Television would send out. I wonder if it was some kind of automated response?

There's a regular game that people seem to enjoy playing with book publishers. They'll submit a classic like Sense and Sensibility, perhaps with the characters' names all changed. Then they'll await the rejection letters and proclaim loudly that publishers are only interested in publishing nonsense.

Obviously, some junior person working through the "slush pile" has failed to recognise Austen, but then they're expecting novels written this century not ones from several hundred years ago.

It seems to me that there must be a strange combination of similar things happening here. I can't believe that anybody in a senior commissioning position in the arts section has not heard of Ralph Vaughan Williams, and didn't realise that he was dead. Perhaps a PA or junior assistant somewhere didn't.

And it seems enormously odd that the letter they relied to much on language and phraseology from that speech. Congratulations on the detective work by the way. I trust someone will point The Observer in this site's direction.

It's all a little odd, and somehow I'd imagine that Palmer's letter went to the wrong department.

And strangely the rejection letter predates the speech - or the setting up of BBC Vision as a division by 5 months. The letter writer must have been clairvoyant....!

Oh it's a spoof - Tony Palmer is so transparent !

I have a copy of a letter given to me by lindsay Anderson; it's from BSkyB, dates from 1991 and is a rejection for a proposal to film THE CHERRY ORCHARD. It is addressed to Mr Anton Chekhov...