Blogging at the BBC: Part 9 - The formal blogging years

Having guest blogged for the BBC about the tenth anniversary of the BBC Online website, I've been fueled with nostalgia, and writing a series of articles about what I remember of the history of blogging at the BBC, and what it was like to blog about my work whilst I was there.

One of the prime movers in getting the BBC to adopt a formal blogging platform was Pete Clifton, then editor at BBC News Online, now Head of Interactive News. BBC News had experimented with the blog format for a while, notably when covering elections in 2004 and 2005.

However in the middle of 2005 editor Pete Clifton decided that blogs on the site should not be called 'blogs' unless they actually were, with proper user comments, permalinks etc, rather than the date-stamped story with limited email-and-publish comment facility the BBC had previously offered. Of course, ironically, he had to announce that on his own non-blog:

"The site has called all manner of things blogs in recent months, even, briefly, this column. None of them have been blogs, and our publishing system does not currently have the tools to produce them properly. So we've looked pretty dumb.

Kevin [Anderson]'s report helped those of limited understanding with a few introductory bullet points on what a blog had to do on our site. They seem fair enough:

* Minimum duration, even for event-based blogs, of at least a week
* Commitment from the author to engage and respond to the audience
* Periodic short posts in reverse chronological order with permanent URLs
* Ability to take and display comments
* RSS feed users so our users can subscribe to them without coming to our site

So until our kit can produce a blog that behaves properly, I've banned us calling anything on the site a blog."

I think it was a sensible decision on his part. Various media organisations have aped the term blog and used it for content, with varying degrees of success. The Sun, for example, has blogs which display virtually none of the characteristics of being a blog at all.

Kevin Anderson's internal report about blogging was vital in this development, because he brought a real on-the-ground understanding of how blogging could play a vital part in his journalism. He signed off his BBC 'blog' about the U.S. Election with a thoughtful valedictory trip through the way technology had transformed his profession:

"Well, it's time to sign off for this election blog.

I've been online since the 1980s when my friends showed me a BBS (bulletin-board system) called Diversi-Dial but mostly known as D-Dial. My friend Chuck used a Commodore 64 and a 2400-baud modem.

I first got on the internet in 1990 when I went off to university. We had to use Unix commands to do anything, and I never thought it would appeal to anyone without seriously geeky tendencies. The learning curve was too brutal.

But then in the summer of 1993, I played with an alpha version of Mosaic. Even as primitive as this web browser was, I thought to myself that this was going to change everything I do as journalist. And of course, Marc Andreesen, who helped create Mosaic, took his degree, went to Silicon Valley and created Netscape.

Why all the deep geek history?

Well, I thought to myself back then sitting at the University of Illinois wow, someday, I'll put together text, pictures, maybe even video and audio and make these really compelling multimedia stories.

And I thought, wow, maybe letters to the editor will be more like an online chat. A decade later, and we're just starting to get there.

I've been really fortunate to do a lot of cutting edge work here at the BBC. I remember four years ago, dashing around the US with correspondent Tom Carver, a videophone, a mini satellite dish and a mini DV cam doing webcasts. Six days, five webcasts, 6,500 miles. Cutting edge and crazy! But we had some really good interaction with our viewers.

However, I have to say that of all the high-tech projects I've done, this blog, which I consider pretty low-tech, probably comes closest to all my university dreams of what online journalism could be.

I know a lot of you have written in and asked me what I think about this and that. It's flattering that you care what I think, but I see my job as a BBC blogger to grease the wheels of global dialogue, not to pontificate about what I think."

Torin Douglas wrote a piece about the BBC's relationship with blogging in October 2005 entitled "Blogging and the BBC" which stated that the BBC could not ignore blogging.

In his article he pointed out that with 'none of the traditional journalistic checks', blogs spawn:

"errors, hoaxes and downright lies which can be right round the world before the truth has its boots on."

He's right of course, where would we be without the meticulous fact-checking and honesty of the mainstream media in the UK? Just ask those meerkats...

More seriously Torin's piece demonstrated an openness from the BBC that it was producing guidelines for staff bloggers, talked about the Richard Sambrook blog-nobbling I mentioned in the previous part, and gave a voice to what Paul Mason thought the BBC's aspirations with blogging should be:

"The real point is what a blog allows: which is personal internet diaries optimised to create and utilise the network effect. Interactivity is a key test - asking questions and responding to comments engages the audience and differentiates the blog from our traditional content."

The most prominent early fruits from the BBC's new blog technology were the Editor's Blog (and now with sister sites the Sports Editor's Blog and the BBC Internet Blog) and Nick Robinson's blog. At the time we promoted Nick's blog on the BBC homepage, and I've made plug-ins that specifically search over his content. 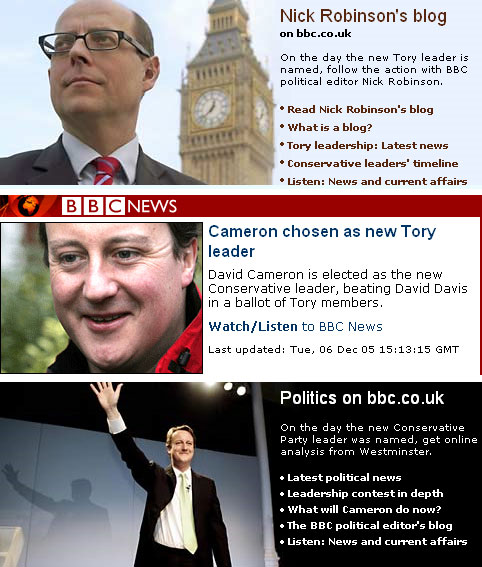 Nick Robinson really did a great deal to get other correspondents within the BBC to understand the way that writing for a blog was different from just filing their regular copy.

The BBC launched their Blog Network some four months after I left the Corporation.

"Welcome to the new home for all of the BBC's weblogs. Although we have had blogs for a number of years, most notably our Scottish community site; Island Blogging and the excellent Ouch, this is the first attempt at bringing you a complete list, some news of new launches by journalists, DJs, and radio shows, as well as links and tips to help you find your way around.

That said we appreciate we still have a lot to do which is why we're grateful for your feedback. We're already collating comments on all of our existing blogs, scouring bloglines, technorati, google blog search and the like. So we'll spot if you are talking about Nick Robinson, Paul Mason or Peter van Dyk on your own blogs. But you can also email us about what we're getting wrong (or hopefully right).

Our biggest challenge over the next few months will be to reflect and engage with the millions of you who are already having conversations about the BBC online, about the stories and issues we cover. This site is a really small step. It's only a list after all. More to come."

Robin Hamman recently put together a two part series on the successes (and problems) with that initiative, which makes for an interesting read. It also handily means that after two years (mostly) on the outside, I don't have to second-guess the current state of play of the BBC's blogs in order to wrap this series of posts up.

I hope this has made for an interesting read leading up to the holidays. There are a lot of things that I've missed out, and for sure I will have made some mistakes due to a faulty recollection of events. And, of course, this has just been how one person remembers one media organisation getting to grips with a new publishing medium - but I think elements of the story have been repeated all over the media landscape, and it is a story that I'm sure I will continue to follow next year, and beyond...

Do you enter the text directly, or does someone else do it?
Is your post 'checked' by someone higher up first?
Are you allowed to re-post to your own blog?
Do you get to read/moderate the comments?
Do you check the log stats and referrers?