I was rather lucky on Monday to get to go to a promotional evening on the walkways of Tower Bridge, called "East meets West". I've been up there a few times, as my wife used to work there, and I've even DJed up in one of the towers. 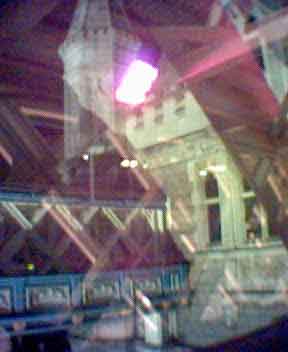 The bridge itself is unique in being both a heritage monument, a working bridge, and an astonishing feat of Victorian design and engineering. 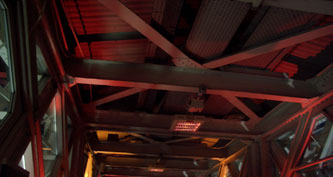 The event was being held to celebrate the success of the bridge as a tourist destination and place for location filming. In recent years the filming of blockbusters like The Da Vinci Code has been carried out there, and for the Thunderbirds movie a helicopter was even flown under the walkways, with CGI later turning it into Thunderbird 2 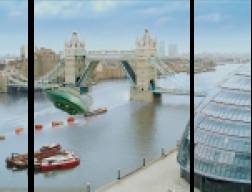 (Oh, and they filmed a scene for the second Garfield movie too, but nobody mentions that in polite society).

The party was in the west walkway, and had some unusual entertainment laid on including a crooning duo, and a man drawing caracatures which were then made into lapel badges.

My favourite though was Tom Badcock, from The Cheese Cellar. He is a London cheese wholesaler who simply lives for the stuff, and gave willing volunteers a plate of samples of cheeses from Ireland, England and France, starting with some mild efforts and going on to a couple of really heady strong numbers. 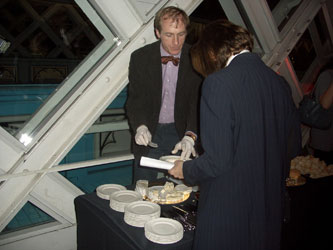 Some of the bridge stats given out were pretty impressive as well. From a very low base number in the early 2000s, the walkways and engine room exhibit now see nearly half a million paying customers a year, and there are evening and weekend events on the bridge taking place around a third of the year. 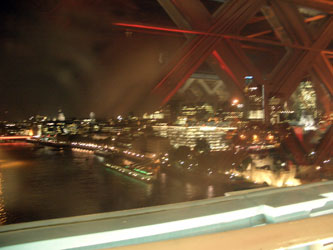 Oh, and the info screens on the walkways run Windows XP it seems. 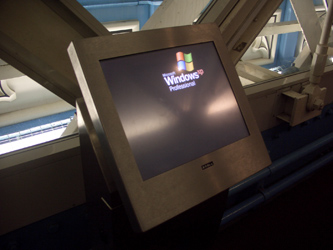 Tower Bridge is also going to be a major feature of the London Olympics in 2012 - in both the promotional campaign and the event itself. Londoners may remember the image of the athlete leaping over the bridge as part of the original bid marketing. 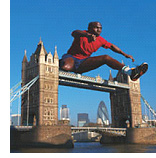 In the Olympics themselves, the middle of the bridge will form the start of the marathon, which is what happened at the start of the Tour De France this year, but which is also, of course, a deviation from the regular London Marathon route. 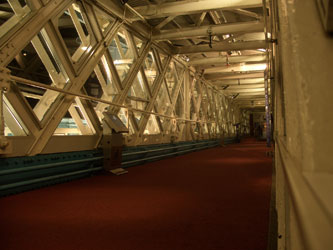 The bridge is due to undergo a complete refurbishment for the event, apparently costing £7m. The brickwork - which disguises the metal framework of the structure and which was put there to make it blend in with the nearby Tower of London - will be cleaned, and the bridge repainted.

I hope they choose the colours wisely.

The supporting metalwork on the bridge is currently painted grey and blue, but was originally chocolate brown. During the Queen's Jubilee Year in 1977 however, it was repainted a ghastly red, white and blue.

I can't help but worry that for 2012 it will either become some horrible dazzle ship style in the Olympic ring colours, or be clad in neon pink like the much-maligned logo.

Read other recent posts about: London Olympics, Other