Since the beginning of last week I've been writing about my experiences working at Reckless Records in the 1990s. Right at the end of my time there I built a new website for Reckless - a pretty damn ugly melange of frames, Flash and purple as it turned out.

Aside from the stock listings, there was also content on there, covering things like Reckless being named one of the top shops in London by The Independent, and a visit to the store by a film crew from CNN.

They were doing a puff-piece about how vinyl hadn't died out, despite the introduction of the CD some 18 years previously. I've lost count of the number of articles I've read or TV features I've seen saying the exact same thing since then - although [via Dadblog via First Draft] this commentator on The Guardian's Comment Is Free put the number of newspaper columns at roughly three thousand since 1988.

"I remember sometime round about 1988 a new cultural phenomenon was born - opinion columns became available that revealed that vinyl had refused to die and indeed, was making a comeback.

Since then, with every advance in music reproduction & distribution technology, with every new musical movement, there has been the accompanying commentary revealing this astonishing news about the resurgence of vinyl.

Personally I’ve always preferred columns about how great vinyl is to columns about CD, DAT, MD, P2P or downloading. They have a more organic, natural quality and all have their own unique idiosyncrasies.

Actually I have an extensive collection of nearly three thousands columns about how vinyl is still popular, and shall be adding this one to the top of the pile."

I've got a comprehensive back-up CD of the old Reckless site still with me in Chania, and so I've been able to rescue these screenshots and the transcript of the TV item that I made at the time. 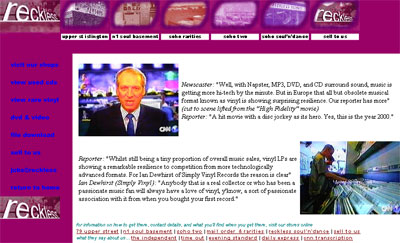 Much mirth was had at Reckless because the two staff members interviewed - who both shared names with famous musical figures - had their names switched around in the captions by CNN. Yet another example of deceitful television I guess, and in a business news programme as well. Shocking stuff.

And I couldn't help but notice the guy who 7 years ago said he thought DJs who used CDs were not in touch with the music like he was, because he played out using vinyl. I wonder what he makes of it all now - these days I wouldn't dream of DJing anywhere without using my laptop as my main tool.

Newscaster: "Well, with Napster, MP3, DVD, and CD surround sound, music is getting more hi-tech by the minute. But in Europe that all but obsolete musical format known as vinyl is showing surprising resilience. Our reporter has more"

(cut to scene lifted from the "High Fidelity" movie)

Reporter: "A hit movie with a disc jockey as its hero. Yes, this is the year 2000. Whilst still being a tiny proportion of overall music sales, vinyl LPs are showing a remarkable resilience to competition from more technologically advanced formats. For Ian Dewhirst of Simply Vinyl Records the reason is clear"

Ian Dewhirst (Simply Vinyl): "Anybody that is a real collector or who has been a passionate music fan will always have a love of vinyl, y'know, a sort of passionate association with it from when you bought your first record."

Reporter: "And music afficianados are willing to pay for their passion"

Customer at Counter: "For me I can't buy these tunes on CD or y'know anything like that, or tape, so I have to buy it on vinyl"

Andy Williams (Reckless Records) (wrongly captioned as Tony Wilson): "Most people just, you know, they see stuff they haven't seen for a long time, and they'll buy it regardless of the price"

Reporter: "In the UK alone LP sales have rocketed up more than 20% in the last year. That compares to a modest 5% gain for CDs. The numbers are even bigger in the singles market where 12" dance singles are driving growth."1

Tony Wilson (Reckless Records) (wrongly captioned as Andy Williams): "Some newer albums I prefer to have on CD, just because of the convenience of not having to turn it over, but I think with dance music there's just such a 12" culture it's never really going to die away"

Customer browsing racks: "Well, being a DJ, I feel, these CDs, you're just taking a short cut with all the tricks and everything, the mixing and whatever, and basically you're not in touch with the music because you're just pressing a few buttons and that's it."

Reporter: "Whilst dance music currently dominates the vinyl world hip-hop, punk, indie and classical all have links to the format. Indie label Matador still releases 95% of its artists on both CD and vinyl. The biggest buyers of LPs are audiophiles who say vinyl looks, feels, and sounds better than digital."

In the next part of this series I'll be writing about what it was like to work in one of the hubs of that vinyl resurrection, the flagship Reckless Records shop on Berwick Street.