Why my Doctor Who blog failed: Part 5 - Terminus

This week I've been writing about why my Doctor Who Blog site was less successful than the average Cyberman plan for an invasion of Earth.

I've looked at the fact that the type of content I wanted to publish didn't suit the medium I chose, that I didn't market the site properly, and that I chose the wrong technology to underpin it.

Today I want to look at another major problem - I had picked something too much like hard work. Well, at least too much like my day-to-day work anyway.

I was, of course, a little nervous, like most fan sites, about the fact that images from the show and the logo were all copyright to the broadcaster of Doctor Who, and that I was using it all without permission.

I'm well aware that the BBC mostly turns a blind eye to this sort of thing, unless you are posting Teletubbie pr0n fanfic, but since I also worked at the BBC at the time, it presented a little bit of a potential conflict of interest.

Once I began publishing articles about the upcoming 2005 revival of the show featuring Christopher Eccleston and Billie Piper I was very careful not to use any insider knowledge on my site.

That was incredibly frustrating at times.

As something to do with the BBC website's homepage, I was signed up to a plethora of internal BBC mailing lists, including some from the marketing department. Quite by coincidence, well before the first episode of new Doctor Who was shown on TV, or even before it was leaked on the internet, I ended up being sent a PDF file of the design for the large billboard posters due to promote the show. 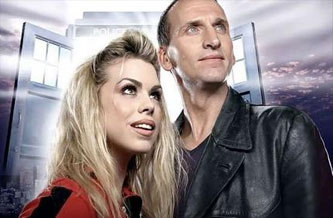 I knew that no other Doctor Who fan site had yet obtained and published them, and that it would be a great traffic draw and publicity boost for the site, but, of course, I couldn't risk my job by leaking it myself.

Another problem for me was that towards the end of the first series, it became increasingly tedious to have to make the Doctor Who Blog site in my spare time, when during the day I was overseeing the production of real Doctor Who stuff for the real BBC website.

For the climax of the season the BBC produced a special Dalek themed bbc.co.uk homepage for the day - which I have written and talked about previously. 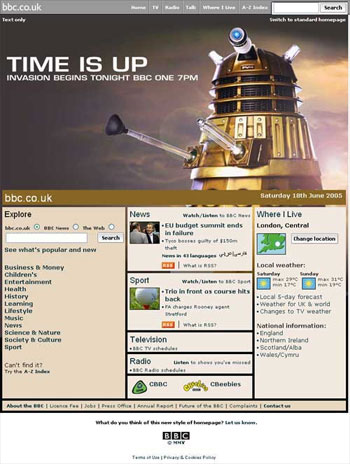 To then have to go home and make screen grabs of similar material and produce a page about it without giving away any insider knowledge was no fun whatsoever. Especially, as I established yesterday, that my poor choice of technical platform for the site meant making the pages was a painfully over-complicated process.

Despite my best intentions it turned out that the doctorwhoblog.net site did come to the BBC's notice anyway, in a way that was rather embarrassing for me.

Whilst the run-up to the new series was going strong in June 2004, BBC Four transmitted as part of their 'Summer In The Sixties' series, an old Patrick Troughton episode as part of a themed night of fantasy and sci-fi shows.

It was the first time that the BBC had shown a black'n'white episode of the show on TV for many, many, many years, and so I made an ephemera and contemporania entry for it on the site. I had captured mp3 clips of the continuity announcement before the show, and noted which exact BBC Four ident had been used in the lead up to transmission, and detailed all this on the doctorwhoblog.net site.

Without me knowing how it happened, probably a Google search for "BBC Four" or something like that, the page came to the attention of the editorial team of the BBC Four site.

Who used to sit directly next to me in Bush House in London.

I had to consequently sit in silence and listen to the excruciating conversation that ensued, about how the person who ran the site must be a complete spoddo with no life. Which I guess was correct. Then there was a subsequent debate on whether the legal team should be contacted about the use of the BBC Four logo and the mp3 clips. Eeeek!

I was mortified, but thankfully nothing further came of it.

In the end, faced with the fact that although I was getting some traffic it wasn't converting into either affiliate related merchandise sales, Google AdSense click-throughs, or anything much in the way of comments on the pages, plus the fact that I was leaving the country, I reluctantly pulled the plug on the site at the end of 2005.

I've got a mangled back-up copy of the site offline, but I broke my golden rule that permalinks should be permalinks.

So much for the proud boast that used to be on the homepage of the first incarnation of the site that if you wanted to comment on the last Doctor Who story, "Survival", you'd have to wait until November 22nd 2029, exactly 40 years after it aired, to do it. 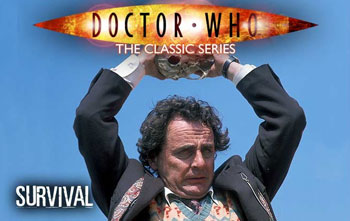 In the next part of this series I shall conclude by looking at the general lessons about setting up a new website that can be learned from my Doctor Who blog experience.

I have been reading your six-part article with great interest, as coincidentally, I have just launched (on 30 June 2007) my own Doctor Who blog.

(There are a month of entries before that, but I was building up content before it was formally open to the Net).

It would be great if you would view the site - and perhaps leave a few comments on various entries!

Like you, I have tried to use an organising theme - in my case there will be regular entries on the Classic planets of Doctor Who, and on any alien planets that appear in Nu-Who, with more general entries too.

(This was all inspired by the famous quotes from RTD about "Planet Zog.")

I'm looking forward to part six of your article!
Click here for planetzogblog.

I just loved the priceless moment of your colleagues commenting disdainfully on your website, without realising that you were doing it.

I think we've all been there, as web creatives ;-)