Updated 15/6/2009 - A mere two years after I wrote this, Facebook has introduced a usernames feature - you can find out more here.

The thing I've really liked about it is that it isn't just the usual round of suspects in my social group who are online there. I mean, of course most of them are, but besides that there are also members of my extended family, people I haven't seen since school, people who I used to work with who never previously had time for much of this social networking internet malarky, and my wife has found it more compulsive than me, which is rare for an internet application.

The stratospheric growth of the Facebook service in non-geek circles certainly puts all the blogosphere hype about Twitter earlier in the year into perspective. Who needs Twitter when all your Facebook friends have status? [1]

The downside of such massive growth for the good folks at Facebook is an increasing backlog of feature requests springing up on blogs around the web.

Christopher Woodill wants to be able to search for people by their maiden name, Euan Semple wants RSS feeds from groups whilst Rohan Jayasekera wants a feed of the news stream of your friends activities. Jon Udell's gripe is that you can't get Facebook to acknowledge that you met someone 'through the internet'.

I've only got one quibble with the service so far - well, apart from the fact that fictional characters seem to be excluded, so that Greg The Bunny can have a MySpace but not a Facebook page. 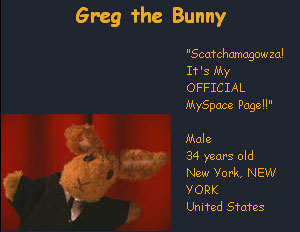 Nearly all of the social services that I use intensly, and those that I don't use that often, give me a really handy short URL to refer to my profile, whether it is www.last.fm/user/currybet/ at Last.fm, or www.flickr.com/people/currybet/ at Flickr, currybet.vox.com/, www.dopplr.com/traveller/currybet on Dopplr or http://www.myspace.com/currybet.

They are neat, look tidy in an email signature, easy to say out loud, and printable on business cards.

It doesn't lend itself to any offline distribution of my profile - I'd really like the option be able to claim http://www.facebook.com/currybet instead.

In the meantime, I have thought of a workaround for Jon Udell's problem though.

All we need to do is create a profile for Iain Turnet, get everybody to make him their friend, and then you can say that you met anyone on Facebook through Iain Turnet.

[1] Well, unless like a certain Mr Cridland you feel need to link the two together [Return to article]

Hey Greg, thanks for dropping by and checking the site out. I guess that proves you must be real, not like in that stupid DVD special feature "The Greg the Bunny Show: Reality" where that stupid man tells you that you only exist when the camera is on. What an idiot, and how offensive to a proud Fabricated American like yourself.

Hey Martin, check out my service to try and fill the short url gap: