Over the last week or so I've been looking at how British newspapers have adopted some of the technologies and services that make up the so-called "Web 2.0" phenomena - things like RSS feeds, blogs, user generated comments, and social bookmarking widgets. I've looked at most of the major papers so far: The Express, The Times, The Mirror, The Telegraph, Daily Mail and The Independent.

Today I want to look at a newspaper that is generally thought to punch above their circulation weight on the web, The Guardian.

The Guardian has an RSS feed auto-discoverable from the site's homepage, and mentions their RSS services twice on the page. There are links to "RSS/Web feeds" in the 'News direct' section on the right-hand side of the page near the masthead, and further down in the left-hand navigation there is an RSS button with a text link labelled "How to use our RSS feeds"

From The Guardian's RSS help page, they offer a selection of 24 feeds, and these have buttons to add the feeds directly into the online RSS reading services from Bloglines, Google and Yahoo!

They also offer links through to places where users can find the feeds on the arts.guardian.co.uk sub-site.

Their list of feeds, though, is puzzlingly not comprehensive. Why, for example, does the Gamesblog RSS feed get listed, and the Sport blog RSS feed not? Nor is it entirely clear why the arts.guardian.co.uk URL gets a specific mention of their additional feeds, when there is no mention at all of "Comment is Free", which features granular per-author feeds and its own page dedicated to RSS.

Amongst the British press The Guardian is exceptional in providing "Newspoint", their own branded RSS reader. It comes pre-loaded, of course, with a selection of Guardian feeds. The service was launched back in December 2005, and looks like an interesting attempt to make commercial gain from RSS reading, which is, on the whole, a fairly advertising resistant behaviour.

The Guardian does not appear to carry any social bookmarking style buttons on their main content or the blogs.guardian.co.uk domain, but the Comment is Free site does have some social bookmarking facilities. Posts offers users the option of bookmarking the site with del.icio.us, Digg, Reddit, Newsvine and Now Public. There are also links to track conversations inspired by the post using either Tailrank or Technorati.

Comment Is Free also links out to Technorati searches for each article on the homepage. These links pull up a list of any blogs that have linked to the Guardian's article.

The Guardian has adopted the concept of blogging in a big way, and has blog-style content in two places - at blogs.guardian.co.uk and on the "Comment Is Free" spin-off site.

There has, though, been some debate, instigated by Shane Richmond at The Telegraph, over whether The Guardian is entitled to call Comment Is Free a 'blog' at all. The argument is that basically since the content isn't exclusively written for a 'blog' it shouldn't be called a 'blog'. I'm not convinced I can agree with that argument myself. Especially when you consider some of the things that other newspapers call 'blogs' - particularly on The Sun's site, which I shall be looking at tomorrow.

For example, some of The Guardian's blogs, like the News Blog, include a 'contemporaria' panel under each post, which includes links to what was The Guardian's headline at the time the post was made, as well as looking outwards at what was topping the UK index of the BBC's site at the time. It also includes links to Technorati related to the topics the post has been tagged with.

Comment is Free features an author profile on each post, allowing readers to view all articles by one author, and to subscribe to a per-author RSS feed.

A very similar template is used on some of the blogs on blogs.guardian.co.uk, but without those features in place. 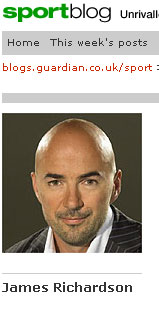 With such variations, as much as it is possible to generalise, The Guardian's blogs are very fully featured. Navigation is provided by author, category, and chronologically. RSS feeds are enabled, and all of The Guardian's blogging areas allow user comments.

Some areas of the Guardian's blogs, the football blog for example, have built up a thriving community, and earlier this year on the football blog they had a "Battle of the Blogs" style competition where users could submit their own article for the site. [1]

Credit also has to be given for the way The Guardian uses external Web 2.0 sites to build their own content. Their weekly sporting clips YouTube round-up relies almost entirely on other people uploading clips that they don't have the rights to on YouTube and then linking to them. Then asking The Guardian's readers to suggest more clips in the comments, that they link to the following week. Even linking to copyright infringing episodes of whole TV shows seems fair game.

Having seen that The Guardian has done a good job of getting a volume (if not necessarily a quality) of comments on their blog content, user generated content is not so well integrated into the main body of the news content on the site.

We have seen that papers like The Express, The Mail and The Times all have users commenting directly on to their stories. The Guardian still holds user comment apart from being associated with a single story, and instead hives it off into a separate forum.

The Guardian's talk section is a mix of message boards, and live chat style events - however, they don't appear to have held a live event since Ben Schott's appearance on the boards in December 2005.

The Guardian was at one stage quite a leader in this area, but somehow the lack of integration with the news content on the site makes the message boards feel like a sideshow, rather than real user engagement between the paper and their audience. Certainly, compared to the more direct communication on the blog sections of the site, it feels very Web 1.0.

The Guardian was one of the first newspapers to take blogging seriously, in part, it seems, driven by the fact that the have invested heavily in the computers, technology and online content of their site. This blog-savvy tail seems to have made a success of wagging the rest of the dog.

Including 'Comment Is Free' in the mix gives The Guardian a wide array of blogs to play with, many of which are generating a quantity of user comment. Alongside this, however, the Guardian Talk message boards look a little tired, and it is noticeable that several other papers are now ahead of The Guardian in integrating user-generated content into their main articles and pages.

The Guardian's RSS output is large, but the sign-posts to users finding it are not so hot - they would benefit from unifying the promotion of all of their web feed content in one place. Social bookmarking widgets only feature on the Comment Is Free area of the site, although The Guardian is the only British newspaper I've spotted linking out to Technorati to expose their readers to any blogosphere conversations sparked by their articles.

In the next part of this series I will be reviewing the final newspaper that I will be looking at in depth, which is one of Britain's most popular, both online and in print - The Sun.

[1] Possibly, though, because they were fed up with being constantly taunted by users about the worth of the content they were publishing themselves ;-) [Return to article]

Read other recent posts about: Media, Newspapers, The Guardian, Web

I've noticed recently that a handfull of articles on the Media Guardian site have had comment options at the bottom - however it's generally things like leaders.

Hi Andrew, thanks for that. I have to say whilst researching the site I got nervous about saying anything at all about their pages and services. They seem to have such a variety of templates and functionality across the family of sites that it is difficult to be definitive about anything. It was almost like trying to draw BBC-wide conclusions from looking at a random selection of bbc.co.uk pages!

Guardian's a bit more consistent than that!

But for such a template driven site, they don't seem to have as much consistency as they could.

Hi Martin - that's a very fair and pretty comprehensive overview of what we do. It's certainly not easy to find everything that's going on. I think many of the issues you highlight come from having a very large site that's evolved and grown over the years, with assorted layers of technology and content being piled one on top of another.

It's something we're very aware of, and it's common knowledge we're going through a major process of renewal which should improve matters a great deal. In the meantime, the huge reaction from our users (in terms of traffic and participation) says the 2.0 features we do offer - especially around our unique approach to blogging - are working. We'll continue to vary the tools on different blogs, for instance, to suit the likely user group and needs of each site.

Maybe you'll find time to do another analysis when we've done some gardening? ;)

Neil McIntosh
[Head of editorial development at Guardian Unlimited, so responsible for much of this stuff]

'Unique approach' being re-badging all your comment pieces as 'blogs', I suppose. No one's fooled, you know.