When I was writing last week about the relaunch of the Sony Connect music download store in Europe, I mentioned a promotion for "Rhino Hi-Fives", and I wanted to look at the content of that promotion in a little more detail, and examine the way it represents a reaction to some changes in the consumption of music. 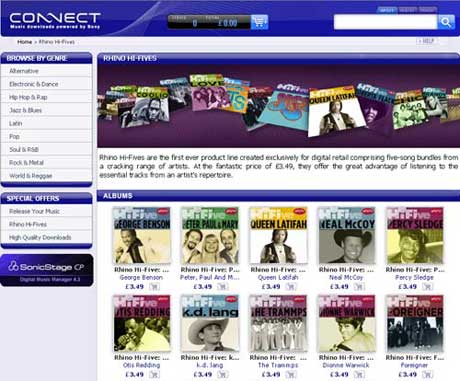 The Rhino Hi-Fives are a series of five-track downloads from a particular artist.

Now, I don't for a second buy the promo hype that they are "the first ever product line created exclusively for digital retail". After all, what are the Apple iTunes "Complete" monster download bundles if not specially created digital content? And I can remember buying a digital-only edition of Goldfrapp's "Twist" single, the first of a series from Mute's artists with their own digital catalogue numbers back in 2003. 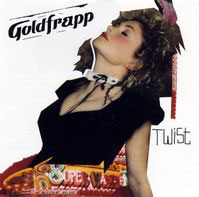 However, I do think the Hi-Fives represent an interesting development. They appear to be the modern digital equivalent of a greatest hits EP. Each of them features the best known tracks by an artist to whom Rhino, a reissue specialist, has acquired the back catalogue. Costing £3.49 and containing 5 tracks, at 50p per song they are aggressively priced for the UK download market. 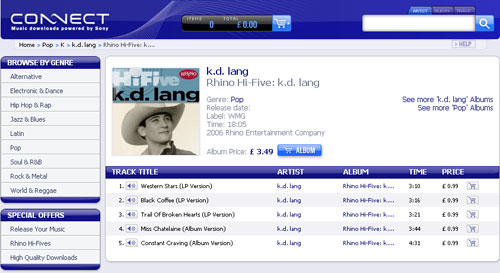 The casual buyer is not necessarily going to rack through k.d. lang's catalogue looking for the two or three tracks they know, nor perhaps purchase a whole k.d. lang Greatest Hits album - but bang! - with one Hi-Five EP there are all the tracks the casual k.d. lang fan ever needs to have on their Sony Walkman digital music device.

Back in the 50s and 60s, the EP used to sit between the 45 singles and the long-playing record as the "medium" sized format. Often material from albums would be broken into several EPs, so that punters could gradually assemble the best tracks off an album, if they couldn't afford to purchase the LP in one fell swoop. 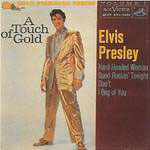 By the 1970s this third tier of releases, sandwiched between the short-form single and the long-form album, had pretty much disappeared. And, by the 2000s, mainstream musical content in the UK came to be packaged physically primarily in one of two ways.

A single would be available in 3 or 4 formats, coupling one strong lead track with either various remixes of the track, or a couple of additional songs. These were available in the UK from between 99p and £4.99, depending on how hyped or obscure they were.

Then there were albums, chiefly selling on compact disc - costing from £9-ish in the supermarkets and up to £18 for obscure back catalogue items.

One of the major challenges facing the music industry as legal digital sales take off, is that whilst download sales are increasing at a healthy rate, they are not fully replacing the loss in physical sales of complete CD albums, leading to a perceived revenue gap.

This change in behaviour can be accounted for by the fact that the new virtual format has given the consumer a greater choice.

Digital downloads provide a new option for consumers - to only buy as many tracks as they want from an album. This means that instead of being forced to pay the £9 and above, or to purchase various different singles, the consumer can cherry-pick from an artists catalogue. They can now effectively make their own custom compilations of exactly what they want to hear from an artist, rather than pay for unwanted material in packaged bundles[1].

This is another symptom of the struggle the industry is having with breaking from the physical artefact tradition, and moving to a virtual economic model. With increasing digital distribution, the physical constraints that used to shape the way music was consumed have gone.

Occasionally you would get a "Bohemian Rhapsody" or a "Shout", but most artists and bands issued 45rpm singles that went nowhere near pushing the six or so minutes of content the format could comfortably hold.

Likewise, albums tended to come in at around 30 to 40 minutes worth of material, because that is how much a 12" 33rpm record could hold without the grooves having to be so compressed that it impacted on playback quality.

If an artist wanted to release more than forty minutes worth of music at a go, they usually had to virtually double their output as the doubled the vinyl (and the price), releasing the 80 to 90 minutes of music that fits on a double vinyl album[2].

With the arrival of the CD, whether you believe the length was determined by a Sony executive's preference for Beethoven's 9th symphony or not[3], artists suddenly had 72 to 80 minutes to play around with when putting their collections of material together. If they went and produced a double CD, then suddenly 150 minutes of work could be released in one go[4].

If you have any doubt about how strong the music industry is tied to the concept that physical size represents the amount of content the consumer can expect to get, you only have to look at the various attempts to get the 3" compact disc accepted as the standard for singles.

Any economic gain provided by savings on material by reducing the size of the disc were surely offset by the costs in setting up 3" pressing machines. Plus, retail outlets didn't have 3" racking, so 3" singles invariably came in the same-sized packaging as their grown up 5" cousins. On top of that, not all compact disc machines could take the smaller disc, so singles often came supplied with their own 5" adapter.

One of the holy grails therefore, for both record companies and online retailers, is to discover a new price-point, no longer tied to physical storage capacity, which is somewhere between the single track and the whole album purchase that will generate increased sales. This could help make up for the revenue gap now that consumers are not always forced to buy the bigger album bundle of content.

The Rhino Hi-Fives look like an attempt at doing that, by digitally recreating the Greatest Hits EP format from the past.

Liked this article? You might also be interested in:
It was twenty years ago today...The Beatles CD reissues from 1987
The new UK digital singles chart tries to avoid the old hype
Beatles digital downloads facing a ticking copyright time-bomb

[1] Not always of course, as the way Apple bundles exclusive content into their "complete" sets for some artist shows. [Return to article]

[2] There are some honourable exceptions to this rule of course. Joe Jackson's "Big World" album came as a three-sided double album with one blank side of vinyl. Monty Python, on the other hand, managed to make "Matching Tie and Handkerchief" a three-sided single album, by virtue of including two playback grooves on one of the sides. [Return to article]

[3] Snopes is ambivalent on whether this is true. Sony's Corporate site suggests the 12cm 74 minute format won the day because it could handle 95% of classical musical recordings and still fit in a suit pocket - but it is in the 'fun' section of the site so maybe they are just teasing. [Return to article]

[4] With the notable exception of The Beatles 1962-1966 Red album CD, which shamefully was released as a premium priced double CD, despite only clocking in at 62 minutes and 27 seconds worth of music, easily accommodated on a single disc. [Return to article]

Can't wait for the m-orchestra one ;)

I don't think they've invented a micro-format small enough for my greatest hits!