At the weekend I bumped into an ex-colleague from the BBC at Stansted Airport, and one of the things we chatted about was the iPlayer project that they were working on - so I was even more interested than usual this week when the BBC Trust announced their preliminary findings about the BBC's proposed on demand services.

Whilst I can't say I agree with all of the restrictions that are being proposed for the service, nor with the whole of OFCOM's input into the process, on the whole I could see the logic behind the decisions on things like DRM-free classical music and book-readings, or in not allowing all series to be 'stacked'.

One restriction stuck out like a sore thumb though - the decision that the BBC should not launch with the ability to bookmark programmes in the iPlayer in advance for downloading.

Rather like some circuit judges in the U.S.A. making odd rulings about the intenet because they don't understand the underlying technology, you sometimes expect people with broadcast in their blood to make the occassional wrong turn. What seems so strange to me though, is that with my TV-and-radiohead on, scheduling programmes in advance for consumption later on has been at the heart of the radio and TV broadcast experience ever since the Radio Times first started to be sold back in 1923. 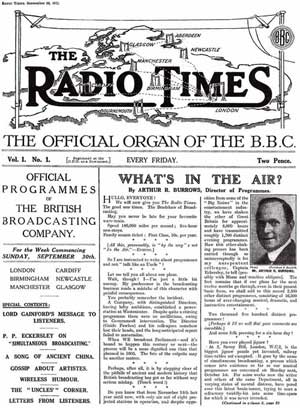 ...and look, even back in 1923 the BBC was tilting the map to make Scotland look tiny and London bigger.

Reading through the BBC Trust's document more thoroughly reveals the reason why this bookmarking 'restriction' has featured in some of the mdeia coverage of the provisional verdict:

"Bookmarking for downloads over the internet
The PVA noted that the BBC Executive has plans to include a technical 'bookmarking' feature that would allow users in advance of transmission date to mark a programme to be downloaded. This feature was advertised in promotional material shown to stakeholders but was not specified in the formal application. In the circumstances, Ofcom did not make an assessment of the potential market impact of this feature, but told us stakeholders had raised questions about it. For the sake of clarity, our proposed approval would not cover such a feature. If the BBC Executive wants to offer bookmarking at a later stage, we will consider the specification and decide whether it warrants a further PVT."

I'd be astonished if adding the feature really required a further Public Value Test, but without it the iPlayer will be a flawed piece of software.

Currently the audience can schedule in advance what they want to watch or listen to by using mechanisms like the VideoPlus code printed in newspaper and listings magazines. Or they can set a reminder in their Freeview or Sky EPG. Or they can programme a date-time-channel combination into their analogue VCR.

And using technology to enable this isn't new - back in the 1980s my old-fashioned music entertainment centre allowed me to set the tape recorder on a timer, allowing me to timeshift radio onto cassette so I could listen to the second half of a football match on a Wednesday night after I'd been to a gig and missed it.

However, precluding the BBC from including this kind of feature at launch will leave people in the situation that they can browse through the BBC's schedules on their PC, and then if they have their VCR remote in their hand they can tap in the VideoPlus code to schedule the recording, or if they have their Sky+ or TiVo remote in their hand they can schedule their hard disk to record it. But what they won't be able to do is schedule a recording in advance on the very PC that they are viewing the schedule information on.

It is especially strange if you consider that some of these activities (buying a listings magazine, tapping in a several digit code, hoping the programme actually transmits on schedule) are complex interactions, whereas "bookmarking" is one of the web's more natively understood concepts.

Leaving aside the argument that advanced scheduling or recording and viewing is a behaviour used and understood by millions in the UK, the suggestion also fails to address that where the BBC is restricted, third party programmers will not be, and so the market impact of this kind of feature isn't just restricted to what the BBC software does, but also what people do with the BBC software.

I'd wager it will be less than two weeks after the public release of the iPlayer that somebody (probably from something like the BBC's Backstage community) releases a bit of software for Windows that will allow you to schedule what you want to download in advance, and which will then wake up the iPlayer and poke it into appropriate action the moment that the original broadcast transmission has finished.

I notice that you say "I'd wager it will be less than two weeks after the public release of the iPlayer that somebody releases a bit of software for Windows that will allow you to schedule what you want to download in advance". Does this mean the iPlayer will only run on Windows, and not Macs? Which is something that really pissed me off about the iMP trial ages ago which I was using; I switched to a Mac halfway through, and bam I couldn't use it. It seems to me that creating an iPlayer that only works on Windows would be a massive failing of the BBC's remit, effectively locking Mac/Linux users out of the iPlayer, despite our money being spent on it. But I suppose this is to be expected, since the BBC decided to team up with Microsoft they'll be locked in forever now.

As I understand it the iPlayer will initially be Windows only - although the BBC Trust have set the BBC 24 months to make it platform agnostic.

From experience I'd suspect that most of the people working on the project would be keen to see it across all platforms but there is more than just simply choosing to ignore Mac/Linus at play.

Firstly, in building a service which there is no guarantee of launching to market, it makes sense to invest first in the platform that reaches the largest user base. Like it or not, and personally I don't, that is Windows.

Secondly, the DRM arrangements have to be approved not by the BBC, but by all the rights holders of the material broadcast, which isn't just the BBC - and I'm not sure how many Linux DRM regimes would pass that test.