The day Digg jumped the shark for me

Like all techie-minded web enthusiasts the emergence of Digg provided me with a new daily source of linkbait from the web, and the RSS feed has been a regular in my Firefox Live Bookmarks for a while.

I can put up with the USA-centric commentary provided by the users. I can put up with the inevitable flame wars between the lead advocate fanboys of the Microsoft / Linux / Apple or the 360 / PS3 / Wii battles. I can even put up with the fact that currently people are writing articles all over the web with the singular motive of getting on the Digg front page with titles like "101 ways that Microsoft, the RIAA and George W. Bush have screwed over Apple, Linux and the Wii - with pictures of hot chicks".

However, yesterday Digg jumped the shark for me when The Sun's preposturous junk science story "You are undie surveillance" about security x-ray cameras being mounted on street corners in the UK gained 400+ Diggs and made the RSS feed under the headline "England to put up X-ray cameras on Lampposts that can see you NUDE!!!". 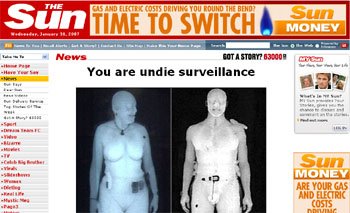 And so a story based on some science that hasn't been demonstrated, revealed by an unsourced leaked memo which was speculating about the future, in one of the UK's most sensational and unreliable newspapers, became a "fact" on Digg.

I'm sure Digg will still pull up some interesting links for me to check out, but it just got demoted out of my "must see" feeds first thing in the morning.

It seems a shame that the Home Office is sticking to the usual line on leaked documents.

Did the Home Office allow this story to take legs because they wanted some good PR for a day?

Hey, I don't usually look at this site, preferring tales of urine smelling tramps and Austrian art over at Lemon Tree but I have to say that the first sentence of this posting makes absolutely no sense to me whatsoever.

Cheers then for making me realise that I am now officially middle aged and past it.

Still I'm looking on the bright side, looking forward to the mighty O's thrashing those ex-Division 1 Champions next season.