If you've carefully read through the documents published in the last weeks by the BBC Trust and OFCOM about the BBC's proposed on demand services and the iPlayer, you'd be forgiven for misunderstanding one large element of the home entertainment landscape in the UK.

OFCOM, in particular, look at several major media formats in the UK, and the iPlayer's potential impact on consumption, on secondary rights sales, and on innovation and investment in nascent markets. The BBC Trust for their part considered that a "significant part of the public value created [by the proposal] is that on-demand services could help increase the appeal of BBC services among younger audiences (aged 16 to 34)"

The OFCOM document is full of statistical projections of how the BBC's proposals will affect the number of hours of television viewing, or radio listening, or the sales of audio books, or the cost to cable companies in pay-per-view retail value. It even offers a complex flow chart of how it performed the assessment.

And in these lengthy considerations of how an on-demand TV catch-up service might impact the home entertainment industry in the UK over the next five year, there isn't a single mention of games.

The OFCOM document does mention 'games' twice. On page 34 of 168 they refer to "'near live' on demand FA Premiership games" as soon to be delivered by BT. And on page 118 of the 168 they note that "The BBC website can be accessed through web browsers found on PCs, portable devices, games consoles etc."

But you can search through the combined documentation for gaming, XBox, Playstation, Wii or Nintendo and turn up nothing.

Apparently on demand and online entertainment in the UK will develop quite nicely without them. The costing projections for broadband infrastructure made by OFCOM in assessing the iPlayer include increased cost to the consumer as they download more TV over the net and thus more data, and increased costs by ISPs to serve this volume of data, but no notion that online gaming might have an impact on those figures. Or that online gaming might actually turn out to be one of the main drivers for consumer demand for increased connectivity, rather than the demand for downloading soap operas online. Especially amongst the 16-34 age group.

Myself, I'm a confirmed thirtysomething moving out of the hallowed 16-34 age group who are watching less and less linear TV, and probably not a typical example, but my recent trip to the UK illustrated to me how people in my peer group often socialise around games, rather than around TV.

When my wife and I went round to my sisters, once my nephew was in bed we got the PlayStation out. We may have been playing TV-derived game formats ("Buzz" and "Millionaire"), but the point was that we were interested in playing quiz shows amongst the four of us, rather than just sitting back and passively watching one.

And when I was with my friends in Manchester, I spent a lot of time playing Playstation with their 5 year old - which was his idea. Again it was a TV derived format - Wallace and Gromit - but we spent about 9 hours over the course of two days with the five year old running the characters around West Wallaby Zoo, and then daddy or Uncle Martin being asked to do the difficult jumps, or setting up the gun for the 5 year old to press "Fire". 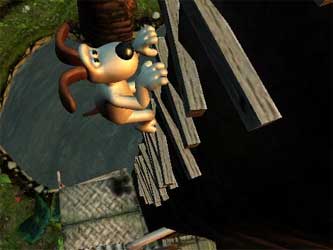 None of which appears to be happening either now or in the future as far as OFCOM or the BBC Trust are concerned. They seem to think we spent the time deciding whether to watch linear TV, or rent DVDs, or listen to DRM free radio downloads, or watch the new-fangled catch-up TV online for our home entertainment. I mean, who plays games?

But looking through the document again and the terms of reference in the Appendix (*Although I work at the BBC I don't work for or on the iPlayer project) it looks like the games industry wasn't in the terms of reference for Ofcom's Market Impact Assessment and they were quite strict as to which markets they should explore as part of this piece of work and not "home entertainment" per se.

Quoted in section Appendix 1.12
"A1.12 1.12 Ofcom should consider the potential impact of the new on-demand proposalson the markets for the following products and services:
• broadcast services on various delivery platforms, including related advertising services;
• on-demand services, including those offered on various delivery platforms; and
• home recording and viewing services and products.

A1.13 1.13 This list is not necessarily exhaustive. Ofcom has discretion to examine theimpact on other products and services that it considers relevant in the course of conducting the MIA, subject to agreement by the JSG.