You can't exhibit code - a tour around the Scottish Museum

as long as but a hundred of us remain alive, never will we on any conditions be brought under English rule

That quote from the 1320 Declaration of Arbroath welcomes visitors into Scotland's National Museum in Edinburgh, where as part of the AUKML conference this weekend I had an evening reception and guided tour.

The museum covers Scottish history from the earliest times to the present day, and has a collection including some fascinating artefacts.

Despite having some Scottish roots myself, the subjugation of Scotland is a topic that I didn't really get taught much at school, and therefore I hadn't come across some of the more colourful characters in Scottish history. Alexander Peden was one of these, part of the Covenant movement. To hide his identity whilst on the run from English authority, he used to wear this bizarre cloth mask. 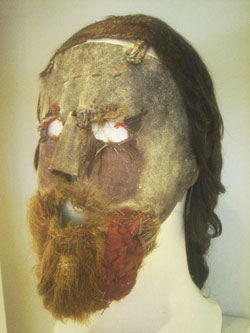 Whilst visiting the museum I couldn't help feeling how odd it was that in a Europe where Montenegro can gain independence, and UEFA looks set to allow Gibraltar to be a member, Scotland still isn't a fully independent nation, when the Scots have such a fiercely proud national heritage.

We were given a great tour by a volunteer guide. An elderly Scottish lady who reminded me of some of the Scottish matriarchs in my extended family, she had a great line in put-downs for exhibits she wasn't at all impressed with. She introduced one painting with a flurry - "and this is, in my humble opinion, absolutely the worst painting in the museum". She also tutted at one bewigged and kilted showroom dummy dressed as a 16th or 17th century Scot - "a little over the top, don't you think?" she inquired of us. She really helped explain some of the more obscure bits of the history to us.

As ever though, disdaining relics of royal pomp and ceremony, I was more drawn to the big chunks of technological and industrial history. Scottish engineering played a prominent role in the Industrial Revolution in the British Isles, and the museum has a couple of steam engines, including the one pictured below, and the giant Newcomer engine that was use to pump out a coal mine. 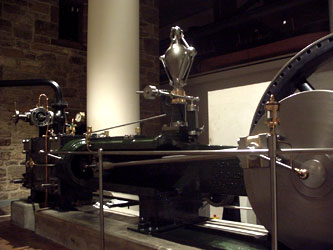 Just as when I visited the Science Museum in London a couple of months back, I was struck by thoughts to do with how museums will be able to exhibit the kind of things that we new media people work on today, and I struggle to imagine it. Many of the major leaps in technology over the last few years have been driven by software, but you can't exhibit code.

Some things don't change much though over time, and there on display in the museum was the convergent family entertainment hub everyone has been talking about for some time. John Buchan of Greenock produced it in 1817 - the polyterpic table. 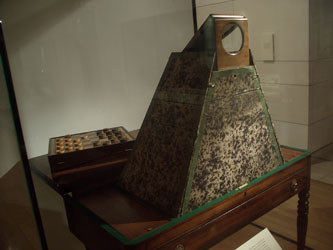 Concealed in its compartments were various games (you can see the checkers set on top of the table), and the peculiar pyramid shaped protrusion was a piece of viewing glass equipment. Pictures could be placed at the bottom of the pyramid and it is currently on display equipped with a picture of Rome in her ancient glory. For the wealthy, it must have been the early 19th century Scottish equivalent of a PS3 or Wii.

This picture of Alexander Peden mask just reminded of a trip to Russia back in 1999, when we were visiting Ermitazh museum.

There was a whole room display of similar cloth masks and other accessories worn by Russian tribes. They all looked really cool, but the same time very scary and bizarre.