A tour of the National Library of Scotland

I've just been spending a very pleasant weekend in Edinburgh in the company of the librarians of AUKML for their conference, where I was kindly invited to speak. The conference wasn't just a panel of speakers on the Saturday, it also consisted of a couple of trips on Friday afternoon. The first of these involved choosing between a visit to the National Library of Scotland, or to the information centre of the Scottish Parliament. I opted for the library, and was really pleased with my choice.

Scotland's National Library became one of the UK's copyright libraries after the 1710 copyright act, but the collection had originally been the library of the Faculty of Advocates. We were given a guided tour which took in the book stacks that are normally hidden from public view, as well as a couple of presentations.

One of the curators of the rare books collection had out for us some really interesting historical publications from the libraries collection. This included a book which retained the censorship scratched into it by the Spanish Inquisition, books from Napoleon's library, reading aids for children set into small horn ornaments to protect them from juvenile wear'n'tear, and a fantastic European book on witchcraft which had survived from 1489.

We also saw some of the gems from their extensive collection of Scottish newspapers, including the first ever newspaper published in Scotland, the Mercurius Caledonius from March 15th 1661. 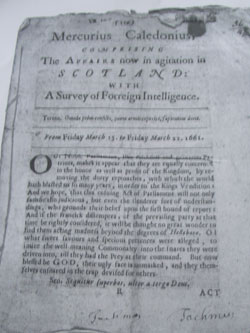 The most popular format of news in Scotland by far used to be the 'broadside' - one-sided sheets of paper which were the tabloids of their day, dealing mostly with crime, sex and scandal, and popularising characters and ballads. The collection is a available in a great site online, including "The Wonder of Wonders Being", a faithful news style account of a sailor's encounter with a mermaid. Other highlights include stories of apparitions, pirates and prophecy. 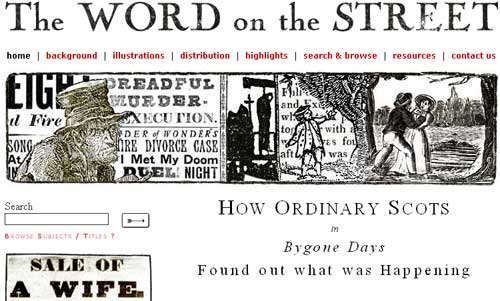 One bit of recent urban folklore piqued my interest during the tour. The library used to rent some additional space from the law courts next door, and had an underground passage linking the library to the former cells where collection items were stored. It wasn't a popular place with staff, as it was reputed to be haunted. One of the book-fetchers talking to us said that objects used to be thrown at you there. The cell at the far end had retained a 13-hour clock which was used to countdown the last hours of a condemned persons life.

In fact the library also has another association with the paranormal. The founder of the collection was Sir George Mackenzie, who was so zealous in his prosecutions on behalf of the King that he became known as "Bluidy Mackenzie". His mausoleum in Greyfriars Kirkyard has been the subject of much paranormal investigation because of the phenomena known as 'The MacKenzie Poltergeist', and has featured in television documentaries as a haunted place. It also made the news a while back because teenagers broke into it and abused the corpses interred there.

One of the remarkable things about the library is how it copes with the sheer volume of material deposited there. They generally receive around 6,000 new items per week, which all have to be classified, catalogued, and shelved. The library uses their own unique shelf-marking system to identify the location of books. Rather then being filed by author, title or subject area, they are filed in the order of acquisition, and ordered by height. The theory behind this is that it is easier to move stock around and re-shelve titles if all the books on a given shelf are of a similar size.

Curiously at one point they decided to remove the dust jackets from hardback books, in order to save the space that the cumulative thickness of thousands of dust jackets would take up - but then they had to retain them and file and index them separately, somewhat rendering the exercise fruitless.

They have introduced a new electronic book ordering system, and instead of trying to affix a new barcode to every book in the collection, they are progressively adding the barcodes to the stock as they are requested. Thus, if a book is never requested by a reader, then it will never get a new digital barcode. The book-fetchers, who are said to walk 10 miles around the libraries stacks every day whilst working, claim that around 95% of requests for books are completed in ten minutes.

I think my favourite thing in the whole library though was in the ordering room. They have rows of computers, and a completely online book request service that can be done from home, dealing with the physical book collection. However, stuck in the corner of the room was a good old-fashioned wooden set of card-index holders - for the music catalogue, which was, of course, the first medium to go digital with the introduction of the CD in the 1980s.