Vote for your 50 favourite number one albums

Tomorrow is the fiftieth anniversary of the UK's official albums chart, and to celebrate there is a vote to work out the nation's top 50 number one albums of all time - a ruse always good to gain a few column inches in the press.

I was very interested in the usability of the vote. When I was involved in building this kind of vote at the BBC we were always careful about how many options were available at once. The chart people have opted for an astonishing 785 options on the one page, with a scrollbar. There are at least anchors in the form so that you can skip down the list to specific decades.

The vote form and scrollbars appear to be designed at a fixed height to fit exactly in a maximised browser window. Providing you are using Internet Explorer on a specific-sized monitor of course. If you are using Firefox and tabbed browsing, the row of tabs in the browser frame pushes one of the scrollbars off the edge of the screen, which was a little annoying to say the least.

They are attempting to secure 'one person one vote' by using email validation. Interestingly the form asks for your birthdate, and the default is set to 1980. I always assume that if the default date in a drop-down isn't set to either 1901 or the current year, then you must have deliberately placed it near where you think most people will be choosing - it looks like they are expecting the average age of voters to be around the 26 year old mark.

Of course, one of the other intriguing things about the list is that sometimes it is quite random what actually reaches number 1 or not. Several bands are not represented by their most critically acclaimed slow-burning success stories, but by the follow-up album they made once they have cemented their reputation - thus Pulp are represented by "This Is Hardcore" not "Different Class", and the Manics by "This Is My Truth..." rather than either "The Holy Bible" or "Eveything Must Go ()". And whilst "The Stone Roses" by The Stone Roses doesn't get a look-in, who would have thought that in the space of a few months The Levellers, The Boo Radleys and Black Grape all scored number one albums?

Since various artists compilations used to be included in the main chart rather than hived off into their own, several "Now That's What I Call Music" albums feature in the list. As, in fact, do two of the anonymous cover version albums with the suspect covers in the "Top Of The Pops" series. Volumes 18 and 20 both made number one in 1971, and not because they allegedly feature Elton John on piano like some of the earlier "Top of the Pops" albums. 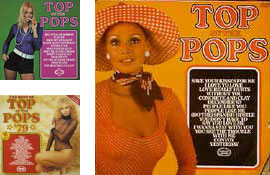 Perhaps I should try and get some viral campaign together to get those hyped to the top of the list so that chin-stroking musical critics in the national press can splutter their outrage?

Astonishingly between July 1956 and January 1968 there were only 25 different artists who topped the chart, and that includes counting 10 original soundtrack albums from different musicals as "artists". The early 60s may generally be seen as a time of growing individuality and independence for teenagers, but they weren't that individual - they were all buying the same albums!

In the four years and nine months between May 1963 and January 1968 there are only 16 different UK number one albums, and with the exception of an appearance by "The Sound of Music" soundtrack at number one for nearly two months in 1965, they are all by The Beatles or The Rolling Stones/Bob Dylan/The Monkees (8 #1s for The Beatles, 3 #1s for the Rolling Stones, and two apiece for Bob Dylan and The Monkees).

I expect a few of those Beatles albums to be clogging up the final top fifty when it is announced, but the survey did allow me the pleasure of voting for one of my favourite albums from my childhood, "The Muppet Show" by The Muppets, which was a chart-topper for a week in 1977.