Doctor Who Cuttings Archive on 'BBC.co.uk - promoting Doctor Who 2005'

The Doctor Who Cuttings Archive is dedicated to preserving all kinds of Doctor Who related media clippings online. Last week they and the BBC branched into a new area by collaborating to present an article about the promotional coverage of Doctor Who on bbc.co.uk in the last year - "BBC.co.uk - promoting Doctor Who 2005".

Eyedropper has been a prime mover in this and worked very closely with them (with the tacit approval of benevolent management at the Beeb), and the finished article includes copies of not just the things we published, but some of the development work that went into producing the homepage promotions. It is the kind of thing that I am always interested in because I don't have a designer's view on things (you can probably guess that looking at currybetdotnet). When people show me mock-ups or placeholders my mind naturally races ahead to "How are we going to build that technically?", "What policy/standard/guideline does that breach?", or "How accessible would that be?", not "how can we iterate that visual design again and again to make it work even better?".

The Cuttings Archive article doesn't just cover the one-off special homepage, but also looks at the teaser clip countdowns and animated promotions the page did to back the return of the show. They have also kindly linked to my Open Tech presentation about the technical side of doing the Doctor Who special homepage - "Putting A F__k Off Dalek on the BBC Homepage Isn't Big or Clever".

Out of all the things made available by the article my personal favourite is the really all-Dalek homepage. The first time I saw it there was a split-second in my brain between the "Fucking hell that is awesome!" excitement and the "Oh, we'll never get away with doing that" realism sinking in. 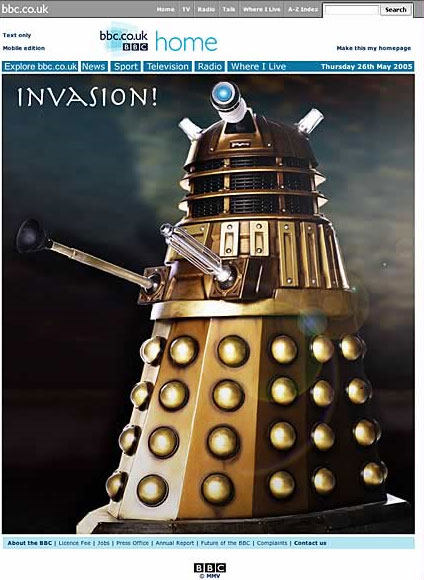 Eyedropper insists that I vetoed this. I really don't remember. Now thats what i call a homepage invasion. Astonishing

One reason I wanted to do a whole pager, was that to see if T would go for it, but I kind of thought he wouldn't.. hence in the five iterations the rest of the page slowly creeps back in as T kept insisting I put more back in.. Still, I like what we ended up with too.