With Google diversifying into IM/IP Telephony, and Yahoo! being described as a messy media megacorp, I was interested to see how their core services - search - coped with today's launch of Google Talk. 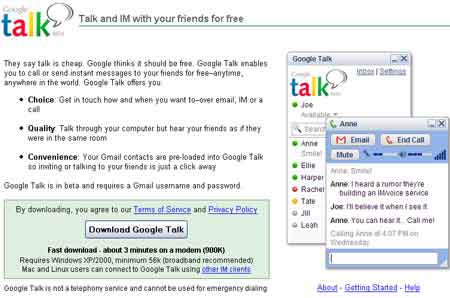 There has been a lot of focus recently on their relative index sizes, and at the moment Yahoo! has a slight edge reported in the relevancy stakes. My experiment today looked more at freshness.

At 5pm today search for "Google Talk" on Google yielded no links about the new messaging application in the top ten.

By contrast a search on Yahoo! revealed that they had already indexed and ranked the wikipedia article about the new application. In addition Yahoo! pulled in three news stories about the launch at the top of the results set. (Mind you, maybe they would rather I gloss over the fact that a search for "Google Talk" also inexplicably suggested the guitar tab for The Everly Brothers "Price Of Love" tune that I had added to My Web 2.0 Beta a couple of days back).

Incidentally, top marks again to Wikipedia for having a comprehensive entry on the new application on the day of launch, even exposing the Hunt the Wumpus "easter egg".

The About window of Google Talk contains a barely visible coded message in light gray font that reads play 23 21 13 16 21 19 . 7 1 13 5. Turning the numbers into corresponding letters of the alphabet where a=1 and z=26, then the message reads play wumpus.game. This is a reference to Hunt the Wumpus which can be played in Google Talk. Add wumpus.game@gmail.com to your buddy list and send it a text message of "play" to play.