Yesterday it seemed like half the people I know were at Open Tech 2005, where I was giving my talk on the consequences of putting a massive Dalek on the BBC homepage.

The things I enjoyed most included The Pod's "Techno Is Not A Joke" movie shown before the whole event got going, Tom Chance's talk on the excellent looking Remix Reading initiative, and Ted Nelson's hour long rant that everything everyone in the room had ever done with computers ever was wrong. Well, that wasn't exactly the topic of his talk but I left the auditorium feeling chastised for my insistence on using computer interactions that simulate paper instead of wanting to "write in the air".

The funniest things both revolved around Jeremy Zawodny. Just like on Friday at the BBC the stampede to claim the Flickr Stickrs that Jeremy had bought over with him was amusing, but what made me laugh more was the fact that he delivered an excellent presentation on "The Future Is Open (Or Should Be)", with every slide of the PowerPoint marked "Yahoo! Confidential" :-) 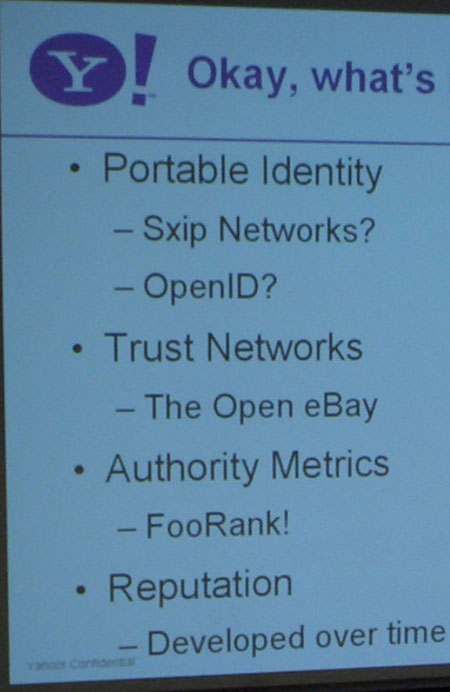 If you missed my presentation, which clashed with the understandably slightly more popular launch of backstage.bbc.co.uk, you can download the PowerPoint - belam_open_tech_05.pps (2Mb) - or read the article "Putting A F__k Off Dalek on the BBC Homepage Isn't Big or Clever"