The fickle hand of fate waved in my direction a while ago, when whilst walking down the street I spotted a small book lying on the pavement. It turned out to be a copy of "Into The Net - Everything You Need To Know About The Internet" given away free with MacFormat 23 in April 1995. 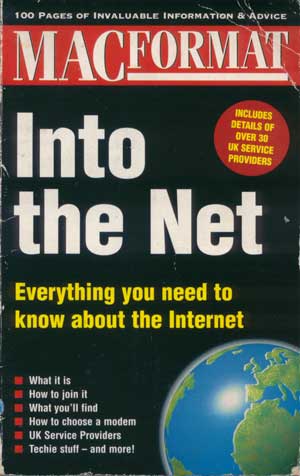 So what did learning everything you needed to know about the internet look like ten years ago? Well some of the stats raise a wry smile for a start:

The scale of the thing is awesome: more than 30 million people are connected to the internet through something like three million computers. Some 150Mb of new data is passed through the Usenet system every day.

The numbers may have changed by an order of magnitude, but then the ease of getting online has also changed by a similar magnitude. Of the 100 pages in the booklet, 46 of them are about purchasing, setting-up and understanding modems. Think about it, ten years later the first thing your computer wants to do is dial home and verify its existence.

Of the 46 pages, many of them dwell on acronyms and terms that I vaguely remember from my own early online days, and the networking stuff I used to have to understand at Reckless - full and half-duplex, RS-232, XON/XOFF. How did the internet ever take off if the mere mortal punter really had to wrestle with all of this to get online? 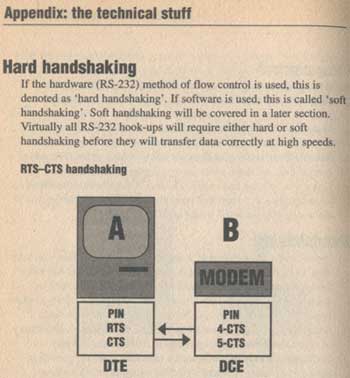 From the perspective of 2005 there is one massive omission from the book. It seems inconceivable now, but there are, of course, no references to using a web "search engine".

try to imagine the sheer volume of information that is stored on all the computer networks that go to make up the Internet, and then let the realisation dawn that you can actually access an awful lot of those databases from the comfort of your own Mac. There are applications such as archie and gopher that make searching and retrieving this information simplicity itself - so easy that even your granny can use it.

Archie enables you to find where those files are available for anonymous FTP (you can download them) are kept on the Internet, whilst gopher means you can wander through many networks looking for files, databases, documents, etc, all from one simple menu, and without you even realising you are surfing around the globe.

It is also interesting to remember back when the WWW was part of 'the Internet', rather than being the internet as is the common perception today. According to 'Into The Net':

the current big growth area for Internet use is the World Wide Web. It's also known as W3, but the accepted acronym is WWW.

The Web is a hypertext based system by which you can browse Internet resources. It is becoming so popular because the most commonly used of the WWW browser programs, Mosaic, enables even the most computer and communications illiterate user to painlessly travel through the Web of net resources, including text, images and sound (even video is making an appearance).

Mosaic turns your computer screen into a World Wide Web interactive magazine, and you can't help but want to turn the page and see what lurks around the corner. You may find news, weather, pictures from the Hubble space telescope, details of what's on the TV, virtual museums, electronic magazines...the list is huge.

I love the interactive magazine print analogy - but dread to think how painful it was getting video online in 1995.

Some things don't seem to change, however, as back in 1995 there was a section in the booklet on 'Internet Talk Radio'

Yes, radio is possible over the Internet. If you enter the URL http://www.ncsa.uiuc.edu/radio/radio.html into your browser, you access a pioneering archive of sound files uploaded by enthusiastic amateur radio 'jocks' from all over the world

Using your Mac's built-in 8-bit recording capability, some good sampling software and average sound sources, it's possible to create your own radio show to upload to the internet.

Podcasting anyone? Even back in 1995 MacFormat knew to say "Okay, so it's not real radio".

One thing that stands out in the book is the editorial desire to 'normalise' the use of this new-fangled computational technology, even from Alex Summersby's opening paragraph:

A little over a year ago, the media were full of scare stories about how terrible computers were*. Playing computer games would give you epilepsy, working at a keyboard would give you RSI or eye-strain or both, and it simply couldn't be healthy for anybody to be spending so much time just sitting alone and staring at a monitor. Today it all seems to be different. The media are now falling over themselves to tell us how wonderful computers are, and it's all because of something called the Internet

Davey Winder also weighs in with a reassurance that this isn't all for geeks in chapter one:

The Internet is used by people from all walks of life, not just the scientists, teachers, librarians and computer buffs that you may imagine. There are bikers, businessmen and women, doctors, lawyers, writers, kids, rock stars, housewives, even the odd MP or two

Clive Parker's chapter on 'Where To Go' makes some predictions for the future - mostly spot-on - which I will look at in a separate post in due course.

Of course, it is easy for me to mock with the advantage of hindsight, but although I don't remember it, I presume it was booklets and articles exactly like this that first got me into using CompuServe back in the day.

I remember having to go deep into the geek dungeon of my university in Canada waaaaay back in 1993. I was one of the first Arts students to get a university computer account, which meant that I had to pay to access services like gopher, archie, email and interactive typing. Unsurprisingly perhaps, I was always the only girl in the computer geek basement...