At the weekend I spent a couple of very happy hours (albeit in almost exclusively middle-aged male nerdy company) visiting the London Transport Museum Depot at Acton Town, which was having one of their twice yearly open weekends. It is a place where all the exhibits that cannot be displayed in Covent Garden are stored, including restored rolling stock and buses, and some are on display.

Of the trains the two that most interested me were a Metropolitan Railway Trailer from 1904, and one of the original engines from the City & South London Railway, dating back to 1890. Now part of the Northern Line, the City & South London Railway was the first electric railway in London, and this engine, Number 13, survives. The story of the 1904 Metropolitan Railway Trailer is sadder. Whilst at North Woolwich Station Museum it was set alight by vandals. The London Transport Museum have had it in their collection since 1997, awaiting the funds to restore it. It is now a sullen burnt out shell of its former self. 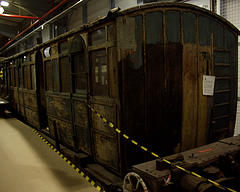 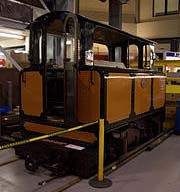 I love the ephemera associated with a transport system, like the maps, signs and ticketing machines. The automatic ticket machines they have on display (40p for any station in Zone 1!) I can just about remember, but some of the maps I don't have a hope of recalling. One tupe map from 1922 still shows Arsenal as Gillespie Road, and there is a map of transport links covering Walthamstow from before the arrival of the Victoria Line. This shows Walthamstow Central when it was known as Hoe Street, and Walthamstow Queens Road when it was simply called Walthamstow. 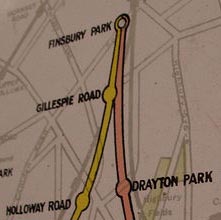 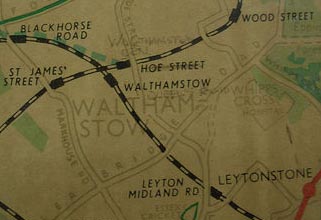 They also have a refurbished 1930's stock train that is taken out for high-days and holidays. It has been restored to a 1960's state, so features spaces for the guard, and adverts for cigarettes. The maps of the Northern Line also illustrate some of the history of the network.

This section, closed during the construction of the Victoria Line, is covered by a coach service during most of the day

The Northern Line maps used to include the section of underground line via Highbury and Islington up to Finsbury Park - I love the fact that back in the sixties trains were replaced by "coaches", which somehow sounds more elegant than the modern 'Rail Replacement Service'. 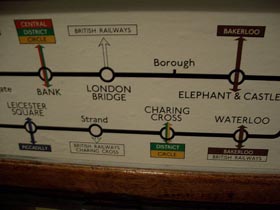 One of the saddest aspects of the collection is to see plaques and stones that had been erected to preserve the memory of transport workers killed in the two major wars of the last century, that have subsequently been removed from buildings and stations as they had been closed, demolished, or rebuilt. At least this stone tribute from Elmers End Bus Garage still had a lone poppy laid on it to commemorate the victims of the flying bomb attack that had destroyed the station during the Second World War. 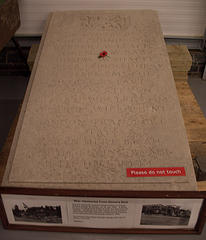 If you are tempted, the next open weekend is on October 22/23. The staff on hand to help out at the depot are always very friendly and really informative. It is around £7 for adults to get in, but younger kids go free, and there is a tiny miniature railway for them to ride on.

I went to the depot in 2003. They'd arranged for a 1938 Northern Line train to do a run between Ealing Common and Uxbridge as part of the weekend. Which was nice.