Just after midnight the BBC homepage launched the biggest promo it has ever had - biggest in size on the screen, in page weight, and in the amount of time taken to get it sorted and produced. The Daleks are invading... 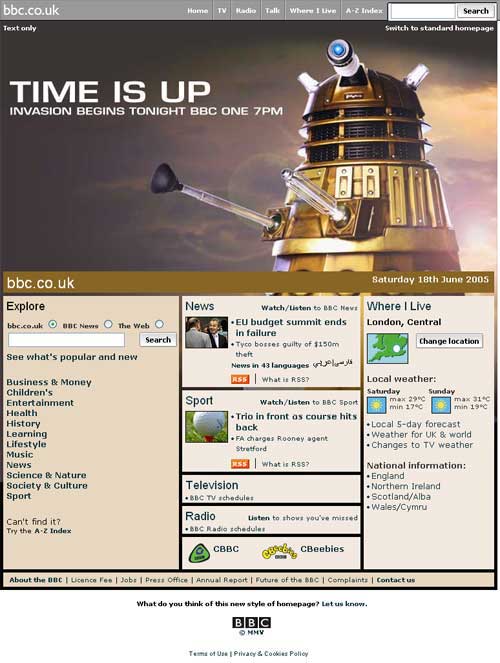 The team have also put in place some routes to gather feedback about the page. It is the biggest shift in the layout of the BBC's homepage since May last year, and we have less than 24 hours to collect data on how it is used, and what the audience feel about it. We've added a special feedback form.

As you may have noticed, we've made some changes to the bbc.co.uk hompage today.

We'd like to hear your views on these changes. Please use the form below to let us know what you think. Unfortunately, we can't reply to all feedback sent via this page but every single email will be read by the site producer. 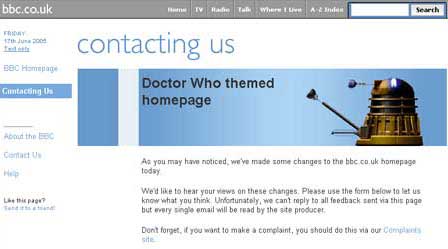 Actually 'site producer' doesn't mean much in this context - as if there was one 'site producer' for the homepage! It has more stakeholders, executives, editors and producers than you can shake a stick at, but I know that several of us will be reading all of these mails with interest. Over the last few months we've made a host of temporary changes to the homepage to reflect topical events or promotions, but we haven't been able to user test any of them. This will (hopefully) give us some valuable insight into whether our audience appreciate something different from the norm, or whether they find it all too confusing. I'm personally really looking forward to reading the audience reaction next week, though not, or course, as much as I'm looking forward to the Doctor Who episode itself.

You can also read about this and the whole series of Doctor Who promotions that have been on the homepage this week from the eyedropper's own mouth.

Who broke the homepage?

Not me mate, I was busy watching Doctor Who ;-)

(Although I suspect I may be busy on Monday morning...)