As the series goes on I am getting more and more impressed with the web support for Doctor Who. To accompany the events in the latest episode "World War Three", the BBC have launched the U.N.I.T website that was featured in the show. 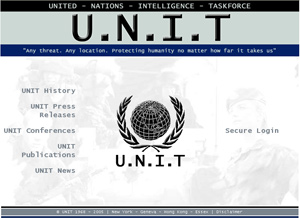 Using a login provided on Mickey's Who Is Doctor Who? site [bison] you can access the secure area, which features a bulletin style message board that U.N.I.T. operatives can contribute to. This includes information about the clean-up and cover-up operations after "Rose", and also some snippets of things not seen properly on the TV, like the interior of the crashed UFO and a close-up of the new Doctor's U.N.I.T. pass.

If you login to the site using the password that the Doctor gave to Mickey during the episode itself [buffalo], you get welcomed as if you are the Doctor and have another area of the site to play with, which features a small flash game allowing you to take control of a U.N.I.T. missile.

The way the Who Is Doctor Who? and now the U.N.I.T. site have gone alongside the series is almost bringing a game-like quality to the experience. As the brigadier would no doubt say, "Well done chaps"

Read other recent posts about: BBC, Doctor Who, Web