Yesterday I went to an election hustings meeting at St Johns Church in Walthamstow, which featured all five of the candidates standing in my constituency. The meeting had been organised by a confederation of local churches, and I only found out about it because my dad emailed me the details. There was no publicity outside the event, which I thought was a shame, because although the turn-out was around 70 people, even though I live 5 minutes away if it hadn't been for my dad I wouldn't have known it was happening.

The meeting opened with each of the candidates being given two minutes to introduce themselves, of which the most notable admission was Nancy Taaffe's penchant for "drinking rum and belly dancing"

The first question to the panel was about immigration - asking whether they thought all refugees with a justified fear should be allowed to remain in Britain, whilst those motivated by economic gain should be refused entry.

Farid Ahmed, for the Liberal Democrats looked towards establishing an EU-wide policy, whilst Nancy Taaffe (Socialist Party) made a point that it was wrong to use military force in places like Serbia, Afghanistan or Iraq and then "pull up the draw-bridge on the fall-out". Jane Wright for the Conservatives praised their "quota" policy, although she did also say that no "genuine" case would be refused, which to my mind is not a quota system.

Robert Brock, speaking for UKIP explained the party's aim for zero net immigration, he was particularly unsympathetic to people who had travelled "all the way through the EU" to claim asylum in Britain. Neil Gerrard, for Labour, said that he had the opportunity to vote on four immigration bills in Parliaments, two proposed by the Conservatives, and two proposed by Labour - and he had voted against all of them.

The meeting was then disrupted by Muslim protestors. When the opportunity was given to make a point about immigration from the floor the first person to take the microphone instead made an entirely different point. He started by saying that this was a house of God for the majority of Christian people present, but that he was a Muslim and his God was Allah. He then made a verbal attack on the Liberal Democrat candidate Farid Ahmed, stating that:

You don't have the right to make law

The chair tried to direct the speaker back to the question in hand, but instead the speaker from the floor was joined by a second man who approached the desk and said to Farid:

You're supposed to be a Muslim

He then tried to give Mr. Ahmed some literature, which Farid did not take. The man then put it down on the desk in front of him, and the two speakers and a group of three or four supporters then marched out of the church chanting. 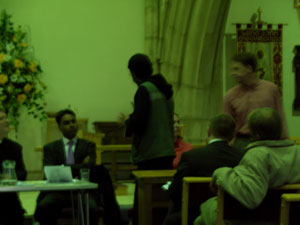 Once order was restored the second question was about the issue of abortion, which has been made an election issue by the intervention in the election campaign of various senior church members in the UK. Neil Gerrard rightly pointed out that this was not a party political issue, since in the House of Commons it was always a vote of conscience.

For the record the positions the candidates stated were that:

The third question was whether the panel supported the UN's aim to raise aid to the level of 0.7% of the GDP of developed nations, and could we really 'Make Poverty History'. Neil Gerrard vigorously defended the current Government's position on International Aid, and explicitly rebutted accusations from the floor about strings being attached to receiving British Government aid.

The chair asked the audience how many had been involved in church campaigns to help Make Poverty History this year, and got an overwhelmingly positive response. When asked if they thought 2005 could be the year that made a difference, the three mainstream candidates felt the answer was "Yes". Robert Brock for UKIP did not think it was possible. Nancy Taaffe felt it was possible, although she wasn't sure the current appeal would succeed. Instead she felt the peoples of the world could make poverty history. "We call it socialism" she said.

The next question concerned a fact about which I was unaware, that the London Borough of Waltham Forest has the highest rate of infant mortality in London, and one of the highest in the country. Jane Wright for the Conservatives managed to drag MRSA into the debate, whilst Farid Ahmed for the Liberal Democrats trotted out a long list of 'problems' with the NHS that can only serve to demoralise staff.

Robert Brock for UKIP stated that a contribution to the infant mortality rate problem was immigrants from "third world countries bringing in diseases that have been wiped out". He was pressed on this point by the chair, asking which diseases had been reintroduced by immigrants. Robert Brock stated it was "a fact", but when pressed further stated that "I don't know off the top of my head" which diseases had been reintroduced.

This question raised a couple of contributions from the floor. One person asked Farid Ahmed to clarify whether Liberal Democrat plans to abolish health service targets applied to all targets, such as the minimum time to see a specialist after having a suspect cervical smear result for example. Mr Ahmed replied that only "political" targets would be abolished.

Another audience member stood up to say, to a round of applause, that "I don't think it is related to immigrants".

Nancy Taaffe, from the Socialist Party, used the opportunity to attack PFI initiatives, claiming that despite the highly publicised moves to improve school dinners, the government was in fact powerless to act as it was locked into long-term supply deals with private companies.

At this point the meeting moved to taking questions from the floor, which had been submitted in advance by dropping them into a biscuit tin that had been passed around.

The first two questions were bundled together, and involved student tuition fees and the creation of City Academy schools, one of which is due to be built in Walthamstow. Robert Brock for UKIP suggested a plan to assess all university courses to see if they are worthy, reassess the grading of all exams, abolish SATS, and give head teachers the power to expel children from school without recourse from "parents, governors and bureaucrats".

The next question was my fifteen seconds of fame, as I stood up to ask:

"Do you think your party's policy on the war in Iraq will win you votes or lose you votes in Walthamstow?"

There was a ripple of laughter as the chair immediately turned to ask "Neil Gerrard?"

Neil Gerrard stated that he had opposed the war "all the way down the line" and called it "immoral". He also said that he had asked Tony Blair at Prime Minster's Question Time back in November 2001 whether he would support George W. Bush in going to war in light of the U.S.A. President's speech about the "Axis of Evil". As to whether the Labour policy would lose him votes he said "We'll see on May 5th", but felt that the majority of people he spoke to on the street supported his action in opposing the war.

The chair then asked him when we vote for you, do we indicate our support or opposition of the war. Mr Gerrard laughed and said there was "no room for that on the ballot paper".

Nancy Taaffe went on to talk about how on the day hostilities started she left her workplace to demonstrate and was subsequently disciplined by her employer. She made a point directly to Neil Gerrard that:

Jane Wright for the Conservatives felt that with hindsight the party would reconsider their support for the war, and that Tony Blair had failed the Iraqi people once in not being honest before the war, and was failing them a second time with insufficient planning on how to get British troops out of there to allow them to stand on their own two feet.

Farid Ahmed for the Liberal Democrats said that on the street and on the doorstep the war was a major issue. He said that:

The chair then asked the audience whether the Iraq war was an issue that would affect the way people decided how to vote. Around ten people put their hands up out of an audience of around 70.

The next question from the audience concerned global warming - was it the most important political issue of the day. Robert Brock (UKIP) said that knowing little about it he "wouldn't like to say", whilst Farid Ahmed said that "global warming is more dangerous than terrorism". Nancy Taaffe took a strictly socialist line that only removing the profit motive would protect the planet, citing the lack of the ever-lasting light bulb and America's oil dependency as parts of her argument.

The next question came from the vicar of St. Luke's church in Walthamstow, expressing dismay with "confrontational" politics and asking whether Parliamentarians would ever work together for the common good.

Jane Wright said that often people seemed "fed up with the lot of us" but she could only work with other parties on an issue-by-issue basis. Farid Ahmed said pretty much the same, but tried to push the point that the Liberal Democrats have been running with a strictly positive campaign. Robert Brock didn't think UKIP could work with other parties - "because of the EU all these other parties are in the same boat".

Neil Gerrard described Prime Ministers Question Time as "the worst half-hour of the week", and wanted to stress that at the committee level MPs do debate and argue on an adult level. He also felt politicians were not well served by media coverage, bemoaning TV, radio and newspaper pundits who start with the premise "this person in front of me is lying to me" and have a "sneering" attitude.

Nancy Taaffe was unequivocal - "Politics is about conflict" - citing giving the vote to women or abolishing slavery as examples where a new idea has had to vigorously uproot an old idea through forceful argument.

After a round of thanks and prayer the last question was about the personal values the candidates bought to the campaign.

Farid Ahmed's values were "freedom, fairness and trust", and he also understood what it was like to come from a "poor, immigrant, working class" background.

Robert Brock said that "I believe in honesty, which is why I oppose the EU which is built on lies and deceit". He also said that it was time to stand up to the government, and that he was there "to be shot at".

Neil Gerrard finished by saying he'd seen Jane Wright described in a press release as an enthusiastic intelligent young woman, the complete opposite to the sitting MP. "So they've described me as an idle stupid old git. I don't mind the old git bit, but I haven't been idle and I'm not stupid"

Finally, I was quite surprised to find that although the church had offered the candidates the opportunity to make literature available, only the Conservatives and the Socialist Party took advantage of it.

I was really pleased that I managed to get along, and it did in fact make up my mind on how I am going to vote on May 5th.