I've mentioned before that at Christmas I bought my wife a book called "Walking Haunted London" by Richard Jones, hoping we could learn more about London, and maybe capture a spooky experience at the same time. It also turns out most of the haunted locations in London are pubs that serve food, so it is quite a pleasant way to spend a Sunday afternoon in my book.

Our first trip was to Hampstead, and this weekend, although we are not strictly doing the walks in alphabetical order, we went to Highgate.

The first item on the agenda wasn't really haunted - although there are tales of ghost trains - but tapped into one of my other interests. It was Highgate High Level Station. This carried a line from Finsbury Park to Alexandra Palace, and it was planned for it to be electrified and taken over by London Underground to form part of the Northern Line in the thirties. The Second World War intervened, the project was cancelled, and steam services struggled on into the sixties until the line closed. Much of the station infrastructure still survives, although the tracks have long since been ripped up, the tunnel entrances closed, and nature has overgrown. 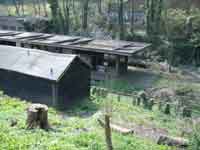 The walk then took us, via a detour to where Peter Sellers once lived, to The Gatehouse pub. This was a pleasant enough pub, but hardly had the ambience of somewhere haunted. Despite the outside appearance, the inside has been thoroughly Wetherspoonerised. Now, rabid euroscepticism aside, there is nothing wrong with a Wetherspoon pub, you know exactly what you are going to get. Its just a shame that such a distinctive building had been McPubbed inside. 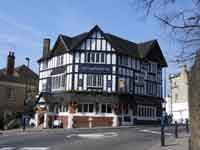 The bulk of the trip was made up though of a guided tour of Highgate Cemetery. These tours are carried out by the Friends of Highgate Cemetery, who were as welcoming in the flesh as they are on the web - the first thing that happens when you visit the site is a javascript driven pop-up informing you that:

The entrance is policed rigourously, no phones, no bags, no coats. It is an additional £1 for a camera permit, and purchasing one is met with disdain. When the person in front of me said they didn't have a camera our host said "Good. People pay more attention when they don't have a camera". Very welcoming. The tours are held hourly on the weekends, and once a day during the week.

Once we were past the desk sergeant, we had a lovely guy taking us round. It is a fascinating place, seemingly in disrepair, but actually carefully maintaining the balance between being a working cemetery, a study in the Victorian way of death, a nature reserve and a site of special scientific interest. 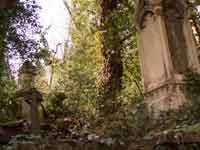 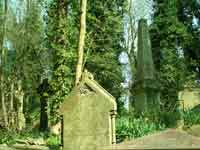 Nothing spooky or out of the ordinary happened to us at all, until the point when our guide collapsed. It wasn't supernatural, it was genuinely worrying. After a while he recovered and then continued with the tour as if nothing had happened. After two more similar incidents we eventually got him to lie down, and helped lift his legs up to restore the circulation to his head.

There was something typically British about the fact that everybody apart from my wife and I and three Austrian tourists just stood around politely not knowing what to do. We sent someone down to fetch help (because the cemetery is quite a large place on a fairly steep hillside). When someone from the Friends of Highgate Cemetery returned, their chief worry was whether we were going to get the rest of our tour, not the health of poor old Ken, which seemed like an after-thought. I ran down to where we had left our coats to fetch some water. By the time I had got back they were going to bring a car through to pick up Ken. Again the guides then tried to get us to continue the tour and leave Ken lying on the ground on his own. Utterly bizarre. I couldn't tell if they were more concerned that we didn't get the full value for our £3, or whether they thought we would take advantage of being unsupervised to do "bad stuff" or go off-piste. Suffice it to say that despite the desk sergeant's haranguing on the way out we didn't give the recommended additional £2 voluntary donation. 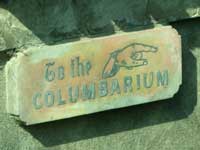 The walk was due to finish at a pub called The Flask, which looked lovely. Unfortunately, being the first hot Sunday of the year the world and his wife had decided to head there for a pub lunch. The queue for a drink at the tiny little bar was around 15 deep, so we sacked it and headed home.

Your experience in Highgate Cemetery sounds truly bizarre.
Sorry about Jack Straws Castle closing, it is being corrected in later edition of Walking Haunted London. I think the Spaniards is far superior, if that is any consolation, although I'm amazed there aren't several head on collisions a day on the bottleneck outside!

If you want a ghost, should come to the toilets on the fifth floor of the Broadcast Centre. There's one cubicle where the handdryer mysteriously turns itself on, then after a brief burst of hot air, turns itself off again...

Some say it's just a faulty handdryer but those in the know, know that it is really an old athlete who used to haunt the 1908 Olympic stadium that used to be sited in that area.

And by coincidence, the toilets are located exactly where the medals were awarded all those years ago...

Yep, Andrew B, those podiums sure were high in the early days of the modern Olympics ;-)

It's amazing what you can do with long ladders :)

With my wife we had an amazing visit at the Highgate cemetery. Was a cold day, but with light enough for some good pics, and enough to admire the nature and the old "haunted" monuments so plenty of moss everywhere, I love it.Our scottish host was very cheerful, a lovely redhaired miss.
Try again cuz its one of the most beautiful places in London and Britain.