So the worst kept secret in the land was finally revealed today as the 2005 Election campaign got underway when Tony Blair announced:

"I have just been to Buckingham Palace to ask the Queen to dissolve Parliament, which she has graciously consented to do."

Nice of her to deign to allow us to have our democratic fun.

I'm very interested in this election actually, as the New Media landscape in the UK is much more advanced than it was in 2001, internet penetration is much higher, and there are now online tools like Tactical Voter specifically aimed at using new media to take part in the political process. Still, I must try and avoid falling into the trap of the kind of knee-jerk political blogging so eloquently pointed out by Diamond Geezer today - Vote050505: A little bit of politics

It is also significant to me that this is the second General Election I have experienced working at the BBC. Last time around I was at researcher level, and my job consisted of promoting BBC content to external search engines. I remember quite clearly having to write up my plans for the election period so that they could be passed by my bosses to check they didn't show any bias. This time around it is slightly different, and for the next couple of weeks anyway it is my problem if the homepage breaks.

It didn't, and the Big Red Button got a second outing in four days to break the news, followed closely by a editorial treatment promo. 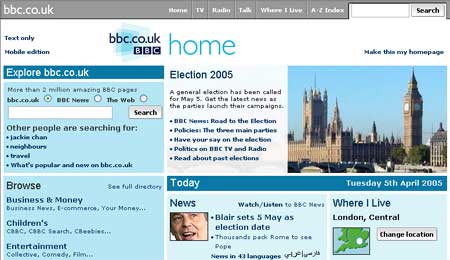 Around the web various other bits of coverage were sprouting. Channel 4's FactCheck site and newsletter looks promising, and The Guardian's Election Blog also looked good - complete with a handy RSS feed (I'm so lazy), and side-bar 'Contemporaria', which I'd not seen before. (Note to self - must hack together something similar for currybetdotnet during holiday)

Meanwhile, not in anyway plugging his own forthcoming cameo appearance in the show, Andrew Marr couldn't resist shoe-horning a seemingly obligatory Time Lord reference into his first post-announcement piece of analysis:

...there is plenty here to dig our teeth into.

The sheer unpredictability of turnout, wildly different polls and the slips and triumphs of the campaign to come mean that the outcome is open.

Labour may be easy favourites, but no-one's actually asked the country yet.

If the 'pre-campaign' is anything to go by, we are in for a month of ambushes, un-choreographed political dramas and the gory unravelling of many promises.

It isn't Dr Who, but it will be fun, and in its curious way, historic too.

As it turns out I shall miss most of the campaign as I will be on holiday. Probably a good thing really...