“Tweet a vulgar picture” - differing reactions to Microsoft, Apple and the Huffington Post ‘cashing in’ on Amy Winehouse’s death

The Huffington Post in the UK hasn’t exactly covered itself in glory when dealing with the death of Amy Winehouse. I’d venture to suggest they should invest in a switch to pull the react buttons that ask you to choose whether you think her death is “Funny” or “Hot” in their next round of CMS improvements. 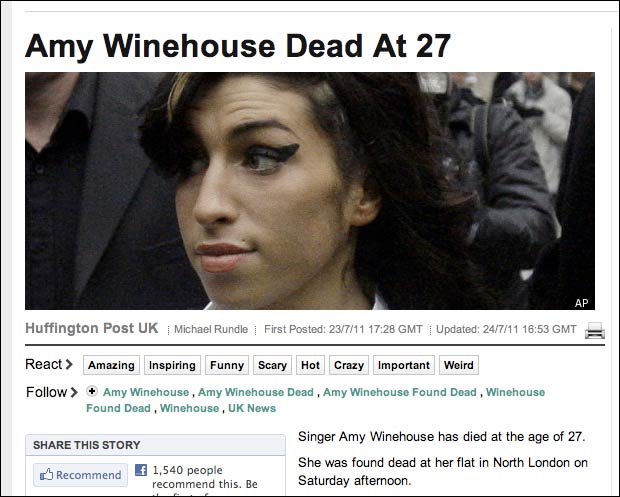 And then there was that blog post - hilariously defended in the comments by the author who claimed:

“Response to this blog in the UK has been positive.”

As I tweeted, the formula "What $news_SEO_term can teach us about $my_vertical" is a common enough one on the web, but something about the crassness of “Amy Winehouse’s untimely death is a wake up call for small business owners” really struck a nerve. It is partly, I think, a reflection of the affection people held for her.

Another team that came under fire for commercially “exploiting” her death was the Microsoft PR team. They tweeted a (now deleted) suggestion that followers download one of Amy’s albums onto their Zune. 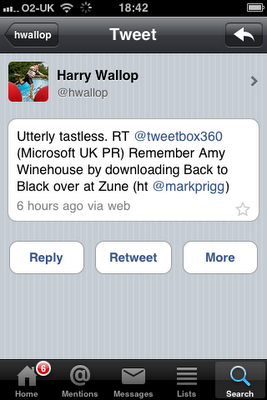 I’m rather less inclined to criticise them, after all, they were only doing what nearly every music retailer would do. In fact, from experience of working in record shops, when somebody dies I know the immediate instinct is to put the price up on anything rare and unusual, and make sure the artist’s work is on prominent display within the store.

That isn’t generally considered bad taste for physical retail, but I don’t think the etiquette is established on the web yet, as the backlash against Microsoft shows. Maybe it is because Twitter is more personal and direct, but I’ve not seen any similar criticism leveled at Apple who had a massive splash promo “Remembering Amy” on the front of the iTunes store today, similarly urging customers to download her amazing music. 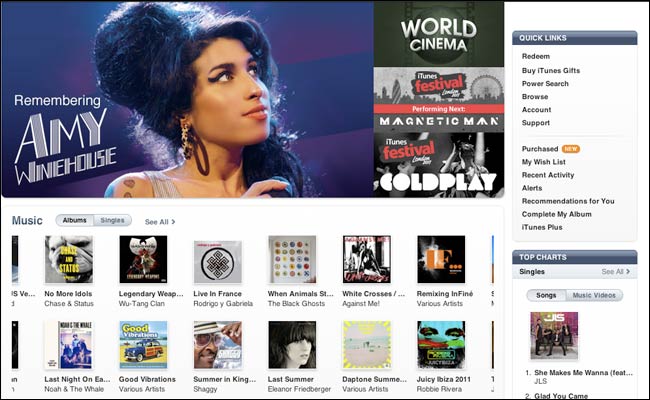 It may be cynical.

But then the music industry is.

Well, cynicism may be a too polite way to respond to the complete lack of humanity in mass media. 'Business is business', we all know that, even when it comes to exploiting other people miseries there's no truce, but then again, this is nothing new, politics and clerics have been doing it for millenniums..