Would the Mail Online be better off ditching some print-based Daily Mail content?

A couple of weeks back Peter Preston wrote a piece for The Observer about the phenomenal success of Mail Online, without the need for a paywall. Indeed, the site's audience numbers and revenue seem to be going from strength to strength, and Martin Clarke's deck of slides shared from April's DMGT investor's day show this is no fluke.

In his article, Preston argued very strongly that it doesn't matter if the subject matter and tone of newspaper websites strays from that belonging to the parent print brand.

I can't say I entirely agree with that.

Where I think the Mail Online particularly suffers is that the digital team seemingly have to publish online everything that has been prepared for the paper.

That leads to some really awkward moments online. I mentioned last week the fact that the paper was 'giving away' DAB radios next to archived articles calling them useless and describing digital switchover as a waste of time. 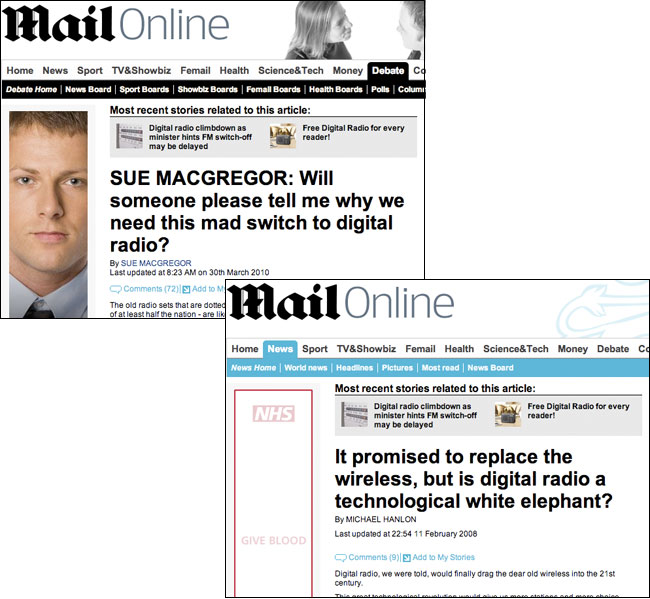 This week's awkward moments already include a story about Jon Venables' collection of upskirt photographs which could barely conceal the tone of disgust - next to the Mail Online's very own celebrity upskirt of Alesha Dixon. 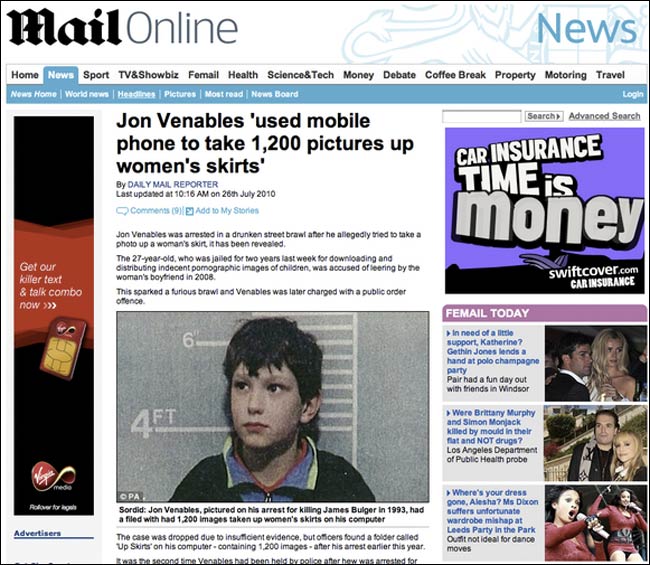 Likewise, Alexandra Shulman wrote a piece asking "When did bikini anxiety become such a national pastime?". In isolation in print it makes a serious point about the way that women are made to worry about what they look like. Online, it is certain to appear against a constant stream of articles in the right-hand column saying that women look too thin, too curvy or too old in their bikinis. 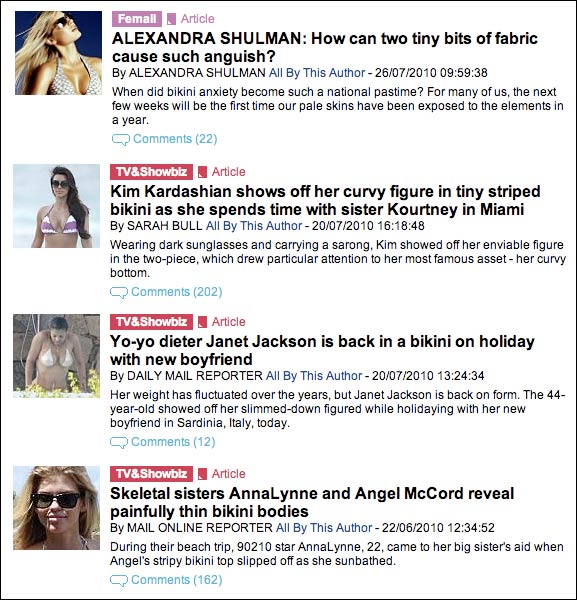 An alternative might be to deploy metatags that are also associated with a positive/negative scores for each tag.

A positive story would then not be listed as a further reading next to a negative story.

Not just avoiding embarrassing juxtapositions as you have demonstrated, but also ensures the related links are indeed related - which means more click-thrus and stronger SEO relevancy.

Ah, but is a story saying that a celeb looks bad in their bikini actually positive, as it makes people think "I don't look so bad after all". Hmm?

DM online is now one of my most visited websites - because I have a sad love for celebrity gossip and they do that pretty comprehensively.

It's not just problems with the site structure, as you've highlighted, they just seem to publish EVERYTHING* online without going through basic checks. Every day I see typos, incorrect picture captions, links to the wrong story, basic factual errors about very famous people. I don't know if they've got rid of subs, or are using work experience people?

It comes across as though chasing the traffic is the most important thing to them - and that is working - I think they 6th top UK site in Alexa?

*especially if it's about Christine Bleakley or Kim Kardashian

Ya nothing like finding amusing juxtoposisms like that after your stories are published online for the world to see. Then again as Jenny stated, maybe they just want the traffic and dont' care about making sure silly things like this happens, or at least, not enough to put extra effort to it.