I was recently in Amsterdam for the Euro IA Summit, and on the night before the conference was due to begin, my wife surprised me with the present of a guided ghost walk around town. Long term readers may remember that back when I lived in London I used to quite regularly blog about the ghosts walks we went on around the streets of London.

Our guide met us outside The Tara, which was a pleasant, if pricey, Irish pub. The Tara's distinguishing feature was that a lot of the furniture had been rescued from an old Catholic Church. For example, the alcoves behind the bar are actually made of niches which used to illustrate the Stations of the Cross. 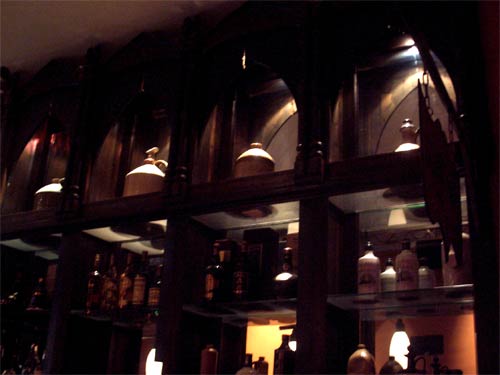 The Amsterdam Ghost Walk needs to be specifically booked in advance, and we really enjoyed it. Our guide was a Dutch native, but he spoke excellent English, and explained to us that although we didn't have to believe everything he said, every word of it was true. naturally.

The monk and the girl

Our first destination took us to both Amsterdam's old spinning house and a modern hotel. The story revolved around a couple of young lovers. He was a priest, who eventually killed himself through grief at being unable to see the young girl again, whilst she served out her punishment at the Spinhuis. 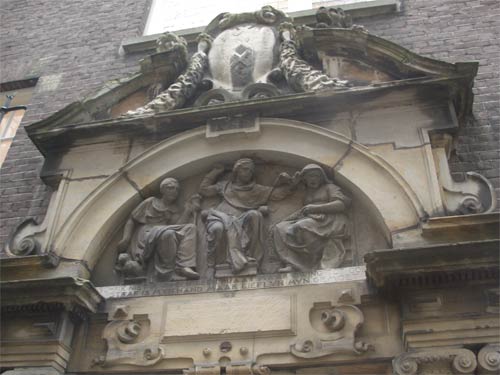 Specific rooms at the hotel are reputed to be haunted by an apparition of his suicide, and our guide supplied us with anecdotes from the present day staff at the hotel who hate going into the two haunted rooms. He told us the name of the hotel and the exact room numbers, but I'd hate to spoil your stay in Amsterdam...

The lunatic at the theatre

Our next stop was a modern day theatre under the threat of closure, that had been built upon the site of an old lunatic asylum. Actors can be a superstitious lot, and this place was reputedly haunted by a fairly standard theatrical ghost. He only appeared on the opening nights of plays that would go on to have a successful run. If the theatre does close, then his days as a ghostly critic may be numbered.

Surgeon and the Tsar

I blogged about the installation at The Waag that allows visitors to stream the contents of their camcorders live to the internet. Before it became host to a digital media group, it was part of the city defences and served as the 'weigh house'. 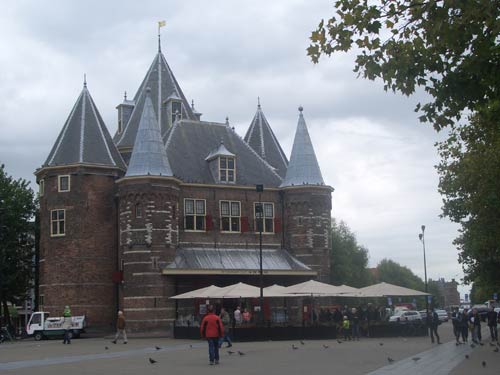 It also served as the 'Theatrum Anatomicum'. Our ghost walk story revolved around a master surgeon who used to give anatomical demonstrations, and how his astonishing collection of human body parts ended up belonging to a Russian Tsar.

Another part of Amsterdam's old city defences was a tower built to defend the ship yards from constant battles with neighbouring naval and trade power Utercht. On one night every year it is said that you can see the events of an evening when a family fled into the tower to escape attack.

At one point during the walk we passed through the gates to an old, long since redeveloped, graveyard by the Zuiderkerk. Our guide pointed out to us the skulls above the gate, which were real skulls belonging, most likely, to criminals who had been hanged. 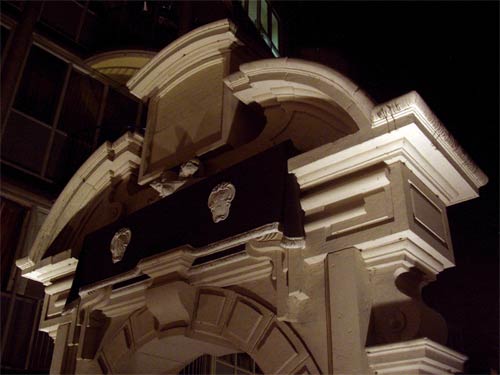 The guide on our walk liked to give a theatrical flourish to his stories, and so took us into a narrow alley to tell us the story of 'Black Matthew'. In the oldest story on the night, 'Black Matthew' was a 13th century highwayman, magician and robber, who used to enjoy gambling his loot in games of dice. He used the dark arts to ensure he never lost, until one night he met his match...in the shape of the devil.

The man who tried to bargain with death

Our evening finished with a story set in what is said to be the Netherlands most haunted village - whose name I didn't catch! Rather like the theatrical ghost, this was a reasonably standard story about a man called Jacob who tried to bargain with death. We've previously encountered very similar tales in Malta.

We very much enjoyed the Amsterdam Ghost Walk, and I'd thoroughly recommend it. We found our guide to be at his best when he deviated from the script, and he had some great personal anecdotes of events that had happened to him on the tour when a bunch of English 'mediums' had booked him for a group visit.

There were a couple of places in Amsterdam with haunted reputations that we visited for ourselves, and tomorrow I'll be recounting our experiences at those ghostly places.

Those are really scary. The stories why the establishments became scary are really interesting though.

Really enjoyed your "review" of the walk and all the details. Just thought you'd like to know - the village is called Broek in Waterland.