Yesterday I was writing about our experience going on the Amsterdam Ghost Walk whilst I was in the city for the Euro IA Summit.

There were a couple of allegedly haunted places that we didn't get to see on the walk itself, and so we visited them under our own steam during our break in Amsterdam.

Amsterdam's "Wailing Tower" was formerly part of the city's defensive walls, and used to be connected to The Waag by a wall. It gets the name "Wailing Tower" from the fact that the wives of sailors would gather there and weep as their men set sail and left Amsterdam's harbour. The fatality rate on voyages to the far east was around 60%, and so many of the women knew that they may not see their men again. Of course, as more than one person pointed out to us in Amsterdam, some of those tears may actually have been tears of joy!

The Tower itself is now a small cafe, with an outside area that overlooks a canal. In the upper stories of the building there is a shop for nautical memorabilia. On our ghost walk, our guide told us a story of a recent haunting in the tower, which supposedly happened in the early 2000s. 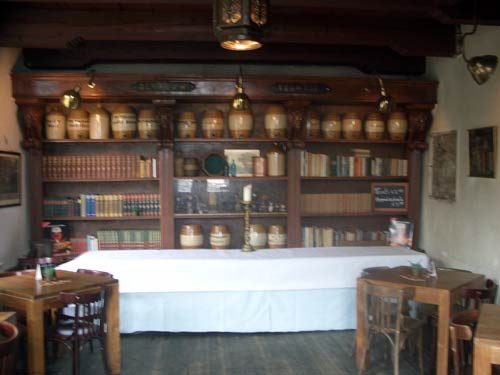 He told us that one of the staff clearing up late at night thought he heard a guest come in, but came into the room to find the cafe empty, except with one chair pulled out of position as if someone was sitting at a table. Unable to shake off the the feeling that he was not alone, the poor waiter was followed home by the entity, and never worked at the cafe again. 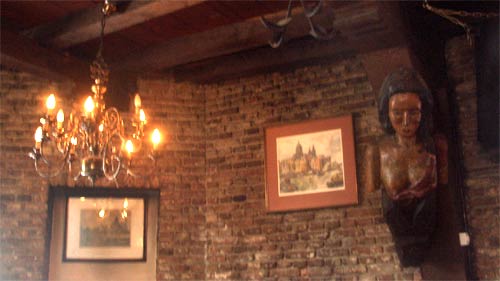 Obviously, we had to go there to experience the atmosphere for ourselves, and chose it as a spot to have a bite of lunch. I have to report that they do a good ham and cheese toastie, the rooms are lovely and well decorated, but that the building didn't have any kind of ghostly atmosphere at all during the day.

The Trippenhuis is a very grand house in Amsterdam, notable for chimeys shaped like cannons. This represented the arms manufacturing trade of the Trip brothers who had it constructed.

I've found several sources that suggest it is haunted, and that the brothers "never left", and it is one of the stories mentioned on the website of the Amsterdam Ghost Walk that we went on. However, although we walked passed it, our guide didn't tell us the story, so I am unsure what the background to the supposed ghostly activity is. 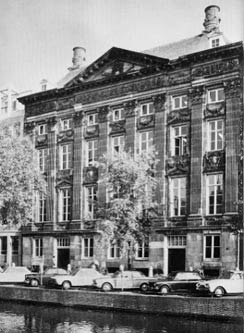 I don't think there are any ghost stories associated with Spooksteeg in the centre of town - but it made for a good stunt ghost walk photo. 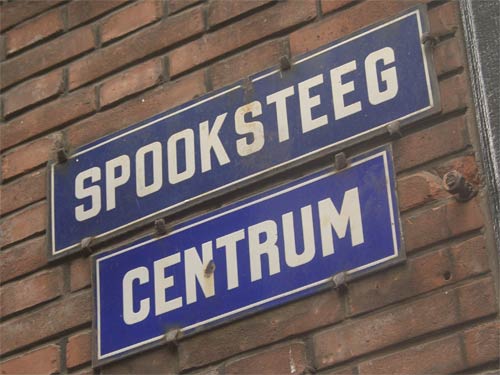 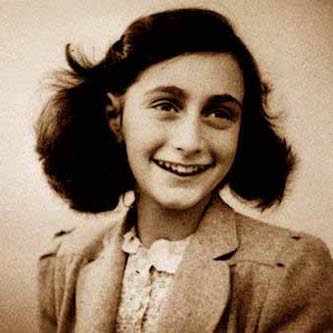 On our ghost walk there was no mention of the Anne Frank house at, but several sources on the Internet claim that there are spooky happenings at the site of the Frank family's hiding place. One source states that:

"When you visit 'The Secret Annex', you can feel cold spots in certain areas of Anne's room. If you walk around to the back around midnight, you can see the figure of a young girl (believed to be Anne herself) gazing out the window, motionless. Some have reported hearing a loud sort of rumbling down the stairs leading to the basement and that dates back to an event that occurred while Anne was still living, in which a sack of uncooked beans was spilled down the stairs accidentally."

Meanwhile, James Van Praagh sells books which include his assertion that he has a special link to the Anne Frank house.

"I'd had a very strong identity with this house since I was a boy. I have long suspected that this identity stemmed from a memory of a past life because I have always been fascinated by World War II. As I stood in front of the Frank House, I began to feel a very eerie sensation. I looked at the canal in front and thought, 'This canal, this bridge, even the trees, are all exactly the way they were 50 years ago.' Suddenly, in my mind's eye, I was back in time. I saw German soldiers on motorbikes driving over the canals. I heard the shrill sounds of soldiers screaming in German for people to get out of their houses and move on, and lots of gunshots in the distance."

I have to say that I thought these stories were a little bit crass and exploitative, and that I think there is more than enough tragic history in the building without adding the idea of a lonely girl ghost into the picture.

The Anne Frank House Museum itself is very busy, and so it is quite hard to get a sense of the isolation that Anne and her family must have felt as they endured their 'internal exile'.

The most moving parts of the Museum are the exhibits dedicated to the victims of The Holocaust and the aftermath for Anne Frank's father, Otto. It was some time after the war before he was able to confirm that all his children had died at the hands of the Nazis, and there were fascinating but heartbreaking objects on display illustrating the bureaucracy involved in repatriating the inmates of the German Concentration Camps after the war.

The thing I found personally saddest was a video loop at the end of the exhibition, showing Otto Frank during the 1960s. In it he explains how he felt that he was very close to his daughter Anne, but that then when he read her diary, he did not recognise the feelings, fears and insecurities that she had written about. He stated that he had come to the conclusion that no parent can ever know or understand their children.

During the summer we visited another town with a ghostly reputation and a lengthy history. Next time the currybtdotnet site ventures into the realm of the ghostly, I'll be talking about Haunted St. Albans.